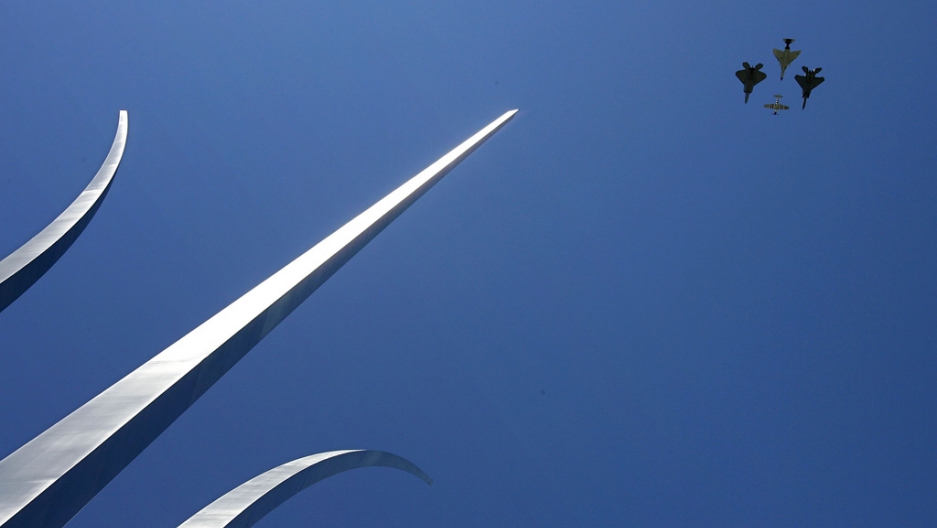 U.S. Air Force planes from four generations, including an F-35 Joint Strike Fighter, an F-15 Eagle, an F-4 Phantom and a P-51 Mustang fly in formation near the Pentagon in Arlington, Va.
Credit: Chip Somodevilla
Share

With prices starting at $110 million per jet, the F-35 Lightning II fighter isn’t really the sort of thing for sale on Craigslist. But the way the Obama administration has been peddling this sophisticated aerial combat tool around the world, perhaps it wouldn’t be a surprise if it were.

While countries including Australia, Canada, Turkey, the United Kingdom and the Netherlands have all placed orders amounting to hundreds of F-35s, the president and his team of executive salesmen have been pitching hard elsewhere.

Late last year, U.S. Secretary of Defense Robert Gates was in Japan singing the praises of the stealth fighter that has cost his government billions to develop. And in Israel, ministers have reportedly been debating F-35 deals offered by Barack Obama as sweeteners in the Middle East peace process.

To some, it might seem odd that the commander-in-chief is willing to hand over keys to aircraft packed to the hilt with the latest U.S. military technology — particularly radar-evading stealth, which no other country yet has — even if the paying customers are allies.

At a time of global instability, particularly in the Middle East, some observers say this hard sell is risky. In the 1970s, the United States sold F-14 fighters to a friendly, seemingly-stable Iran. These later fell into hostile hands after a regime change.

So what’s behind this sales drive? Has F-35 builder Lockheed Martin proved so successful at lobbying the Obama administration that the presidential team is now effectively selling its products door-to-door? Is it about votes? Is it money? Analysts say the truth – like the aircraft – is far more complex.

The F-35’s back story is scattered with controversy. Still not yet in service, the next-generation aircraft has been beset by missed deadlines, and by budgets that have helped make its decade-long development the most expensive weapons program ever undertaken in the United States.

Lockheed says the F-35 will be worth the wait. When it does finally make it off the runway, many experts agree it should be an impressive machine, crammed with gadgetry. Some models will even be capable of performing vertical take offs and landings.

Still five years from completion, the aircraft has already faced hostilities. It has been criticized for performing poorly in simulations, and for including features beyond what’s needed on the battlefield. It has been deemed such a drain on resources that Gates now wants to cut America’s F-35 order to reduce the Pentagon’s budget.

This reluctance to buy a product at home might seem at odds with the U.S. government’s eagerness to promote it abroad, were it not for the fact that the F-35 has been specifically designed with foreign sales in mind.

Since its inception, the F-35 has been known as the “Joint Strike Fighter” in reference to the involvement of allies including Britain, the Netherlands, Canada, Denmark, Norway and Turkey. All have contributed in varying degrees to the jet’s funding and development.

Strategically, that’s an advantage to the U.S., both in getting other nations to help foot the defense bill, and arming friends with familiar “interoperable” technology, says Craig Caffrey, a military aviation analyst with Jane’s Information Group.

“The vast majority of military operations that America undertakes nowadays are coalition operations,” he said. “If you can have a platform in service with your main allied nations — the U.K. in particular is a good example — it makes sense.”

Gates’ recent mission to Japan was also, said Caffrey, an attempt to capitalize on recent high-profile test flight of the J-20, China’s first foray into stealth fighters. “There's obviously a sales pitch here. They're saying if you're worried about that Chinese fifth generation aircraft, we can supply you with one of your own.”

According to reports from the WikiLeaks cache of U.S. State Department documents, American diplomats put pressure on Norway to choose the F-35 instead of rival machines from Swedish SAAB’s JAS Grippen or Eurofighter (another multinational military aircraft project).

Some arms watchers have suggested that the U.S. is playing one country off of another in order to boost its arms trade. Though clearly arranged with a possible threat from Iran in mind, sales of F-35s to Israel could be seen as a way to encourage potential rivals such as Saudi Arabia to spend money upgrading and expanding their fleets of F-15 fighters, made in the United States by Boeing.

To what extent are Obama administration officials acting at the behest of manufacturers such as Lockheed Martin — or perhaps seeking to win key votes from districts involved in the defence industry?

Lockheed spends good money on promoting its interests. In 2010 its lobbying bill exceeded $12.7 million, according to the non-partisan watchdog OpenSecrets.org. Much of this lobbying appears to be aimed at staving off military budget cuts rather than promoting aircraft sales.

But while aggressive sales pitches overseas may suggest otherwise, the Obama administration doesn’t seem to be bowing to the company’s every demand. For example, despite requests from Lockheed Martin, the government has refused to allow overseas sales of another of its stealth fighters, the F-22, which is said to be too technologically sensitive for foreign customers.

Moreover, Obama has urged Congress to scrap funding to build an alternative F-35 engine, a project that currently employs 1,000 people in the swing state of Ohio. (The House of Representatives in early February voted with the president on this.)

It would seem, therefore, that he’s not viewing the aircraft program as a vote winner. Instead, said Caffrey, any promotion of Lockheed’s interests is likely to result from simple economics.

“One key reason why you get heads of states involved in selling this kind of equipment abroad is because they are major industrial deals; they are worth large sums of money, and keep large numbers of people employed in high tech jobs," he said. He pointed out that similar overseas missions have been carried out by British Prime Minister David Cameron and French President Nicolas Sarkozy.

“It’s big business, and it’s long term business. You don't sell an aircraft and that's the end of the company's involvement — it goes on for at least 30 years.”

But even if F-35s are merely being deployed against economic uncertainty rather than into aerial combat, Abramson warned of other consequences.

“In general, it is unwise to think of arms sales as just any other commercial transaction,” he said, suggesting that the F-35s could be vulnerable to misuse or even contribute to regional arms races and instability.

“Any transfer agreement must consider whether the proposed weapons are appropriate for their intended use, and whether they might contribute to regional arms races or instability. It’s not clear that all the discussions around F-35s have adequately taken these considerations in mind.”