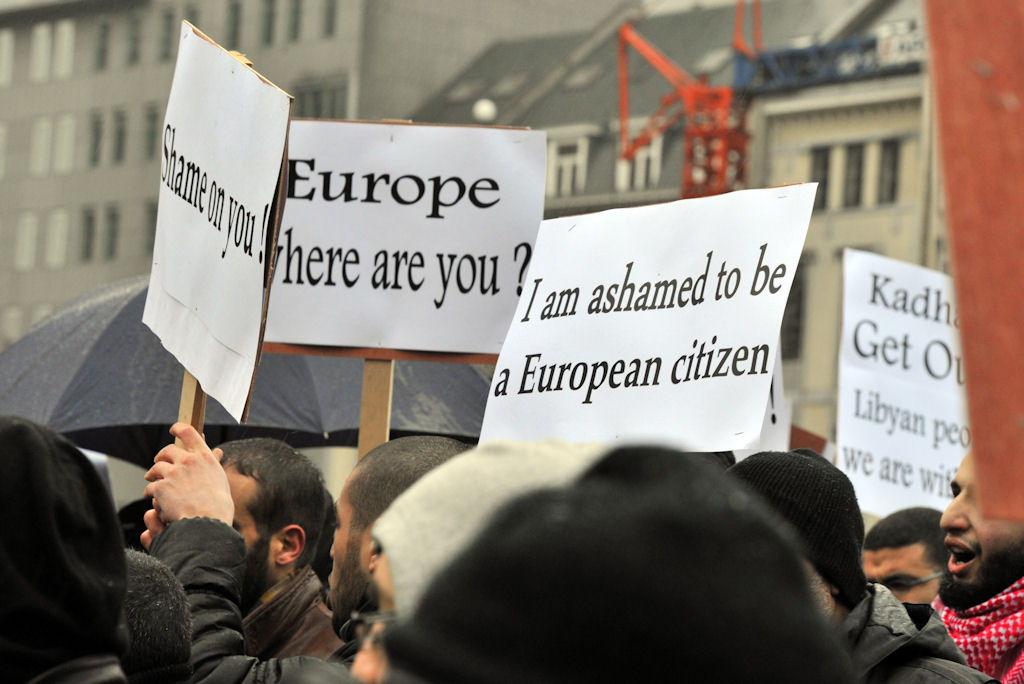 About 50 Libyan residents of Belgium and their supporters hold posters and shout slogans against Libyan leader Muammar Gaddafi during a rally in front of European Union headquarters in Brussels on Feb 23, 2011.
Credit: Georges Gobet
Share

ROME, Italy — In the last few weeks, the close relationship between prime minister Silvio Berlusconi and Muammar Gaddafi has been a little embarrassing for the Italian government. Now the questions go beyond appearances: Italians are asking whether the Libyan regime might be using weapons and equipment made in Italy to crush the protests that have been rocking the country.

Sifting through reports published in compliance with European and Italian laws regulating arms sales, activists have concluded that Italy is the main supplier of military products to the Libyan regime within Europe, and arguably in the whole world.

“From the testimonies and reports that we have of what is going on in Libya," said Francesco Vignarca of Rete Disarmo, an arms control group, "we can conclude that the Gaddafi government has been using helicopters to suppress the protests. And we know that since 2006 Italy has been selling dozens of military helicopters to Libya. Arguably, it's those that are being used.”

The reports also show that the arms trade between Italy and Libya has boomed in recent years, especially since Berlusconi brokered a controversial “friendship, partnership and cooperation” treaty with Libya in 2008. The treaty ensured the Gaddafi government's cooperation in stopping the inflow of African migrants to Italian shores, in exchange for the funding of development projects in Libya and improved military cooperation.

Since protests have engulfed North Africa in recent weeks, Europe's main weapons exporting countries, including the United Kingdom, France and Germany, have announced the suspension of all arms trades with Libya, Egypt and Tunisia.

Italy, on the other hand, has made no such declaration, even though a group of pacifist organizations has repeatedly asked the government to do so. Addressing parliament today to report on the Libyan crisis, Foreign Minister Franco Frattini did not mention the arms trade.

“Of course, we don't think that ships are en route to deliver weapons to the Libyan regime," said Vignarca, "but it would have a sent an important and powerful political message” to announce a suspension of the arms trade.

The foreign ministry did not respond to a request for comment in time for publication.

Just as the Libyan crisis was spinning out of control this week, Italy's defense minister, Ignazio La Russa, was in Abu Dhabi to promote Italian weapon manufacturers at Idex 2011, the largest defense and security event in the Middle East and North Africa.

In 2009 — the latest year for which data is available — the Italian government licensed arms sales to Libya for 112 million euros ($153 million).

Most of the licenses, according to a European Union report published in January 2011, were for sales of aircraft, lighter than air vehicles, unmanned airborne vehicles, aero-engines and aircraft equipment, while 2.5 million euros worth of licenses were for bombs, torpedoes, rockets, missiles, other explosive devices and charges and related equipment and accessories.

In total, between 2008 and 2009, Italy sold arms and armaments to Libya for a total of 205 million euros, more than a third of all weapons sold to Libya from the EU during that period.

From 2006 to 2009, Finmeccanica — Italy's biggest defense company, whose majority stake is controlled by the Italian government — sold at least 12 helicopters to Libya, according to Giorgio Beretta of Unimondo, a news website, who collected data of arms sales from disclosure documents submitted to the Italian parliament. Finmeccanica and its subsidiaries also helped refurbish Libya's 250 F260 fighter jets. Finmeccanica is also part of a joint venture that established a helicopter factory in Libya and provided training and support for military personnel.

Just a little over a month ago, on Jan. 17, a Libyan sovereign fund, the Libyan Investment Authority (LIA) bought a 2.010 percent stake in Finmeccanica, earning the right to elect up to four board members.

Finmeccanica was just the latest in a string of high profile investments by the Libyan government in Italy: LIA and the Libyan Central Bank control a 7 percent stake in Unicredit, Italy's largest bank, while another sovereign fund, Lafico, owns slightly less than 2 percent of auto manufacturer Fiat, as well as 7.5 percent of the Juventus soccer club.

Libya also supplies more than a quarter of Italy's oil and more than a 10th of Italy's gas. The Italian government has denied that its dependence on Libya for energy will not become a problem. However, a new regime in Tripoli could review the advantageous agreements signed by Eni, the Italian oil giant, with the Gaddafi regime.