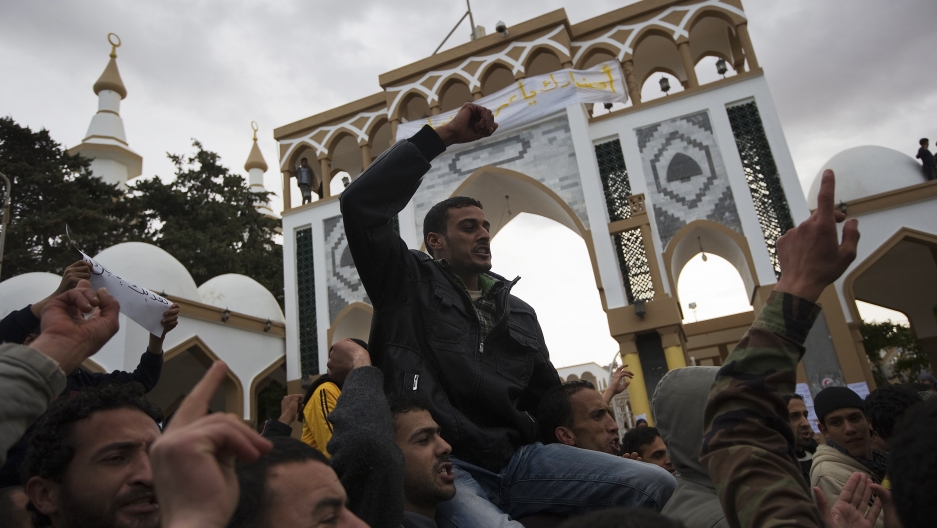 Libyans shout anti-Gaddafi slogans during a demonstration in the eastern Libyan town of Derna, between Tobruk and Benghazi, on Feb. 23, 2011 amid reports that Muamer Gaddafi's regime has lost vast swathes of Libya's east to an insurrection.
Credit: -
Share

Forces loyal to Muammar Gaddafi were striking back in several cites surrounding Tripoli on Thursday, as Libya's rebellion came within 30 miles of the capital, according to reports.

The Libyan capital was a ghost town Thursday morning, with witnesses telling BBC that the city was heavily guarded by pro-Gaddafi forces, with tanks deployed in the suburbs.

But defections of military officers had reportedly multiplied and anti-government protesters declared victory elsewhere after reportedly seizing control of the third largest city, Misrata, 125 miles east of Tripoli, according to CNN.

Videos on the internet suggested that Zawiya, a town 30 miles west of Tripoli, had fallen to anti-government forces. A Libyan army unit loyal to Gaddafi blasted the minaret of the mosque in a morning attack, killing or wounding protesters who had been using the building as a refuge, a witness told The Associated Press.

On Thursday, anti-government protesters appeared to be in control of the country's eastern coastline, running from the Egyptian border through to the cities of Tobruk and Benghazi, the country's second largest city. Troops and police there have reportedly either withdrawn or have joined disparate opposition groups to start providing some order and services.

Other towns that appear to no longer be under Gaddafi's control include Derna and Bayda, among others across the country's east. And on Thursday, there were fresh reports of clashes in the cities of Sabha in the south, Sabratha, near Tripoli.

There was no sign of police or military and the town was controlled by "popular committees" armed with automatic weapons.

"The people are in control. Police stations have been burned and we didn't see any police or army in the past few days," Egyptian laborer Ahmed Osman said after leaving the town and crossing the border into Tunisia.

The coastal city of Misrata was now in the hands of the opposition, according to numerous media reports.

Crowds in Benghazi cheered Wednesday as international journalists drove through the city and the only shooting that could be heard was celebratory gunfire.

"It was just this incredible welcome that really drove home the point that these people are desperate for the world's attention, desperate to get their stories out," said CNN's Ben Wedeman, adding that men in their 20s were guarding the city with shotguns, clubs or hunting knives.

"They certainly aren't lacking in enthusiasm, in serious dedication to defending their city," he said. "What they're lacking is the sort of thing that Muammar Gaddafi's forces have: tanks, anti-aircraft guns, aircraft, warships."

As Gaddafi's hold on the country falters, international pressure is mounting on him to stop the violent crackdown, which has so far killed hundreds of people. The unrest in Libya, which pumps nearly 2 percent of the world's oil, has driven world oil prices up to about $117 a barrel, stoking concern about the global economic recovery.

European countries have readied a set of economic sanctions against Libya.

World leaders condemned Gaddafi's bloody crackdown, including U.S. President Barack Obama, who in his first public statement late Wednesday on the violence against anti-government protesters, said "the suffering and bloodshed is outrageous, and it is unacceptable," and that he was considering a "range of options" on Libya.

"Like all governments, the Libyan government has a responsibility to refrain from violence, to allow humanitarian assistance to reach those in need and to respect the rights of its people," Obama said. "It must be held accountable for its failure to meet those responsibilities and face the cost of continued violations of human rights."

Obama, giving the address from Grand Foyer of the White House, did not call for Gaddafi to step down, but he did announce that U.S. Secretary of State Hillary Clinton would travel to Geneva Monday for a meeting of the U.N. Human Rights Council and to discuss what actions could be taken to stop the violence in Libya.

A special session of the Human Rights Council was also set to take place on Friday to discuss the use of extreme force against peaceful protesters.

Italy's Foreign Minister Franco Frattini estimates that more than 1,000 people have been killed by security forces and government-sanctioned mercenary squads in Libya since the protests began on Feb. 17.

Thousands of foreigners — from doctors to oil contractors — have fled through its ports and borders in mass emergency evacuations. GlobalPost's Jon Jensen reported from the border town of Salum on Thursday that thousands of Egyptians continued to pour across the border, many describing their fears of the growing "chaos" and lawlessness flaring up on Libya’s eastern frontier — despite reports that pro-government forces had largely retreated from there.

“Everybody has a gun now, even little children. You don’t know who to trust anymore — the army, police and citizens are all wearing the same clothes,” said Ahmed Moustafa, an Egyptian returnee. “I’m just happy to be home on safe ground again.”

Meanwhile, new footage reportedly shot inside Libya within the last two days has been posted on the internet: