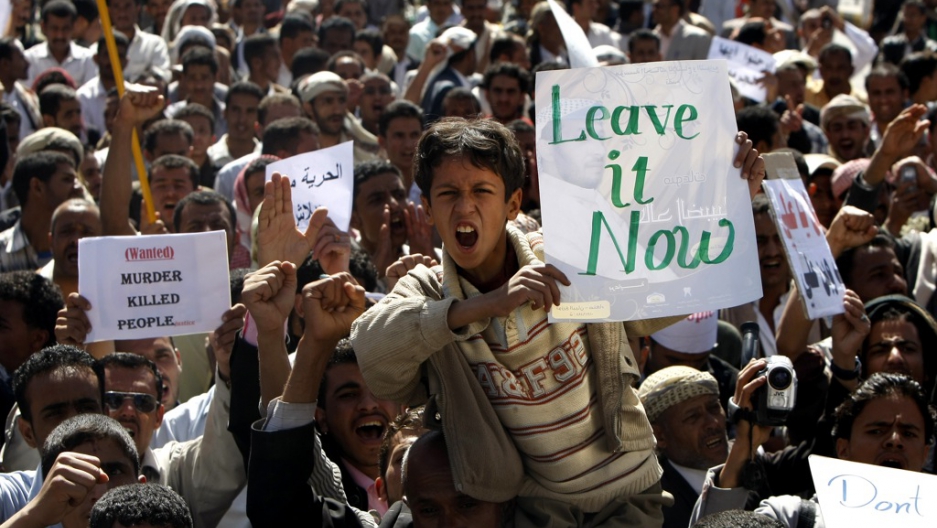 As Saleh supporters began breaking through lines of riot police at Sanaa University, rival protesters began hurling stones toward the pro-government camp. Seconds after both groups began throwing rocks, dozens of rounds from AK-47s and handguns were fired into the anti-government crowd.

Two anti-government demonstrators were killed and more than 20 were injured. Others have been killed in larger demonstrations in the cities of Taiz and Aden, but these are the first deaths in the capital. The death toll from across Yemen now stands at more than 20.

One anti-government demonstrator clutching two fistfuls of spent AK-47 rounds screamed, “This is the beginning.”

As the gunfire subsided, the dead and wounded were carried to a tent set aside for medical treatment. The first man to be brought into the tent, Awadh al-Soraihi, 34, died of his wounds later that night at Republic Hospital.

According to Red Crescent personnel on the scene, four people were shot and several were stabbed.

“We’re growing,” said Wajdi al-Yahfa’I, 24. “After today, the revolution is going to happen. Yemen needed something to happen in the capital to motivate the rest of the country,” he added.

Following the shooting, one Saleh supported sneaked through the anti-government security lines and attacked a doctor as he was treating a man with a head wound. “A pro-Saleh thug punched a doctor in the face while he was treating one of our wounded. We seized him and handed him over to police,” said Hashim al-Sufi, a Sanaa University student.

Half an hour after the first shooting, both pro- and anti-government camps regrouped and began attacking each other with stones and batons. Riot police quickly separated the two groups and stood between them, keeping them from advancing on each other.

One government official claimed that anti-government protesters also fired upon the rival protest, killing one. “Riot police attempted to separate the crowds. Soon thereafter, a barrage of bullets hit the demonstrators — including pro-government supporters — killing one who was said to be in the pro-government camp and injuring more than a dozen,” he said.

Since Monday hundreds of tribesmen from areas surrounding Sanaa have arrived at Sanaa University to join in the call for Saleh to relinquish power. One tribesman from Arhab promised that hundreds more from his village would arrive soon.

“We won’t return to our villages until the regime falls,” said Muhammad Qa’id, a tribesman from Arhab.

With more tribes participating in the protests in Sanaa, the implications of the continuing unrest only increase.

Hamid al-Ahmar, a leading member of Yemen’s Islamist political party, has spent years trying to win tribesmen to his side.

A prominent businessman, Hamid has great sway over many tribes belonging to Yemen’s Hashid confederation, one of the country's two largest tribal coalitions. Hamid's father, the late Sheikh Abdullah al-Ahmar, headed the Hashid federation before his death.

But Saleh's father is also a member of the confederation — creating a dangerous split in loyalties in the group, based largely in the north of the country.

A few weeks ago, Saleh and other prominent ruling party members visited sheikhs from various Hashid tribes, signalling that Salah is trying to rally tribes to his favor.

A revolution in northern Yemen could descend into a civil war split between factions loyal to Saleh and the other loyal to al-Ahmer.