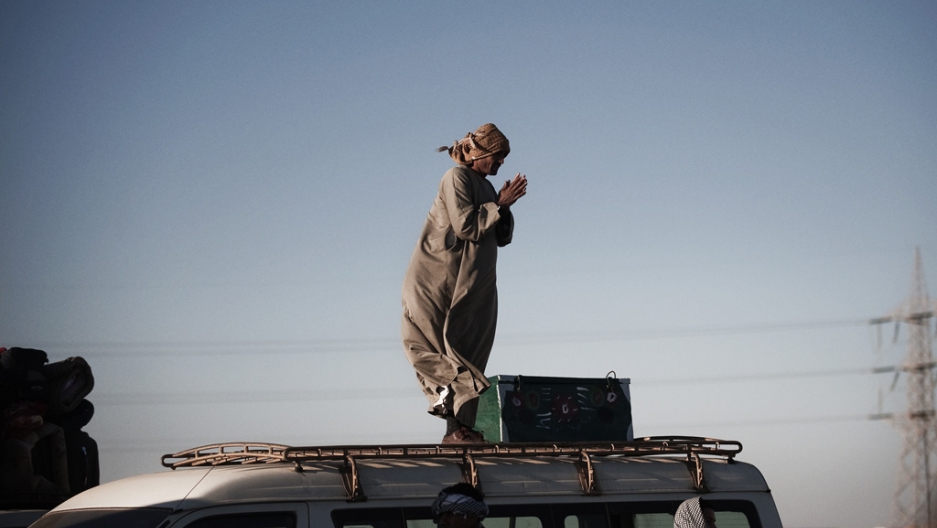 Egyptians return home from the Sallum border crossing with Libya on Feb. 23, 2011 as they flee the political turmoil in the midst of an insurrection against Muammar Gaddafi's regime.
Credit: Stringer
Share
.incontent{display:none;}

SALUM, Egypt — Thousands of Egyptians fleeing unrest in Libya continued to pour across the border near this sleepy Mediterranean village on Wednesday, one day after Libya’s defiant leader, Muammar Gaddafi, threatened to escalate violence against anti-government forces challenging his four decades of authoritarian rule.

Gaddafi, in a lengthy televised speech on state television Tuesday night, urged Libyan citizens to join in on the battle to quell a weeklong revolt in his North African nation.

But on Wednesday Gaddafi's control of Libya shrank as major cities and towns close to the capital, such as Misurata, Sabratha and Zawiya, fell to the rebellion against his rule. Eastern Libya remained controlled by anti-government forces and the opposition vowed to "liberate" Tripoli, where the Libyan leader is holed up with a force of militiamen roaming the streets and tanks guarding the capital. Tripoli remained gripped by instability with all business closed and reports of Gaddafi militia shooting people on the streets.

In a further sign of Gaddafi's faltering hold, two air force pilots — one from the leader's own tribe — parachuted out of their jet fighter and let it crash into the eastern Libyan desert rather than follow orders to bomb oil fields near Benghazi, Libya's second largest city that is held by the opposition.

Some estimate that over 1,000 Libyans have been killed since demonstrations began on Feb. 17 — some reportedly in skirmishes with government-sanctioned mercenary squads.

Egyptians returning home on Wednesday described their fears of the growing "chaos" and lawlessness flaring up on Libya’s eastern frontier — despite reports that pro-government forces had largely retreated from there.

“Everybody has a gun now, even little children. You don’t know who to trust anymore — the army, police and citizens are all wearing the same clothes,” said Ahmed Moustafa, an Egyptian returnee. “I’m just happy to be home on safe ground again.”

Egyptians coming across from Libya said only a few pockets of pro-Gaddafi resistance remained in cities from the border to Benghazi — Libya’s second largest city and epicenter of the recent unrest.

The instability in Libya’s eastern region, said Egyptians coming across the border, came after the withdrawal of the nation’s police forces.

Ahmed Farag, an Egyptian who used to work at Libya’s now-unmanned border crossing, said that the terminal had been ransacked, torched and all the weapons inside stolen earlier this week.

“A nearby army base was also raided. At least one tank was taken by the people,” said Farag.

Many Egyptians also said that bands of “militias” were roaming the streets at night, armed with knives and guns. One witness described a rocket-propelled grenade launcher in the hands of Libyan citizens.

“Of course I was afraid. The highways are now controlled by normal people and thieves,” said Ahmed, 24, an Egyptian baker who worked in Benghazi. “We were hearing gunfire outside our apartment all day long.”

A security official working at the Salum border terminal said that more than 20,000 Egyptians and at least 100 foreigners had come through the crossing this week.

But with increasing violence in neighboring Libya, authorities were bracing for as many as 1 million Egyptians to repatriate within the coming days and weeks.

The normally desolate border crossing, located on a windswept desert plateau just above the village of Salum, was teeming with Egyptian migrant workers and families returning home on Tuesday and Wednesday.

Most were carrying all their possessions, vowing never to return to Libya.

Families dragged dozens of suitcases, metal trunks, and old appliances as they walked the mile-long stretch of no-man’s-land between the border terminals of Egypt and Libya.

Buses and microbuses, completely packed and weighed down by luggage tied to roofs in stacks as high as the vehicles themselves, created a rare bottleneck on the two-lane highway leading out from this otherwise desolate plain.

“This is definitely the first time I’ve seen a crowd this big here,” said Hany Abou el Emany, a driver eager to fill his microbus for the long journey back to Mansoura in Egypt’s Nile Delta.

Egypt’s foreign ministry estimates that as many as 1.5 million Egyptians live and work in Libya.

And with expectations running high that many of the Egyptians in Libya are planning to repatriate, a high-ranking army officer at the crossing said that reinforcements were being sent to help secure the border.

Outside the military hospital in the village of Salum, dozens of army trucks loaded with cots, mattresses and tents were readying for the influx of returning Egyptians.

“We are a developing nation and our resources are limited, but we are doing our best to prepare for the worst case scenario,” said the officer, who spoke on the condition of anonymity because he was not authorized to speak with media.

Health officials along Egypt’s border were also preparing for the worst, amid increasing unrest just across the border.

Egypt’s army established a field hospital this week on the plateau just outside the border terminal for wounded from both countries.

Abdel al Galee Nader, a doctor at the tiny Salum Hospital, said that dozens of wounded had already entered Egypt, adding that “he had not slept in days” because of the inundation of injured.

Nader said he had attended to several knife wounds and at least one patient injured from shrapnel, reportedly fired by a rocket-propelled grenade launcher in Libya.

At the border, however, very few injuries could be seen coming out of Libya this week.

Four ambulances sped through the gridlock on Wednesday, carrying 10 injured in a traffic accident on a crowded highway on the Libyan side.

In addition to fears of violence, most Egyptians complained that businesses in the eastern province of Libya were mostly shuttered.

Ahmed, the baker working in Benghazi, said that the costs of bread had inflated from around 5 cents to 25 cents per loaf.

Khaled Mohamed, a doctor entering with his wife and four children, said his family had to leave most of their life savings in Libya because the banks were closed.

“What can I do? I care more about my sons than the money,” said Mohamed. “We also left a furnished house full of electronics and food, too.”

Some of the returnees had more long-term concerns for the future.

With a sudden influx of thousands of newly unemployed Egyptians, many wondered how they would fare back at home under an already stagnating economy.

“What am I going to do now?” said Ahmed Said, 24, who worked as a carpenter in Libya. “I only went to Libya in the first place because there is no work here in Egypt.”