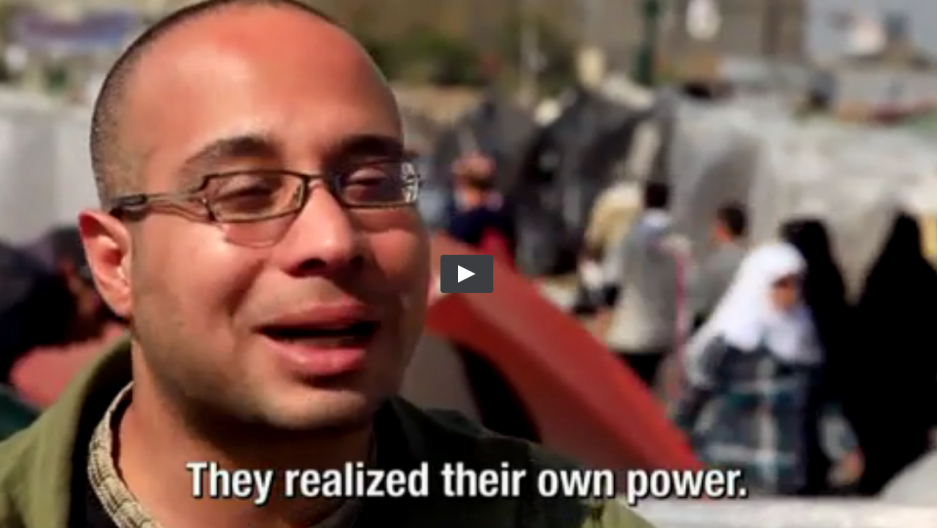 CAIRO, Egypt – On the day after Egypt’s revolution toppled Hosni Mubarak, one of the fallen regime’s insiders, Mohamed Kamal, stood on a balcony and looked across the Nile, eyeing the charred remains of the party headquarters of Mubarak’s National Democratic Party.

A longtime NDP party leader, Kamal shook his head in disbelief at all that happened in just 18 days and at the party headquarters’ blackened facade and smashed out windows. Long a symbol of the regime’s cronyism and arbitrary power, the NDP building was set upon by the angry demonstrators, looted and then torched.

“Forever it seemed there were only four real institutions that existed in Egypt: the military, the police, the National Democratic Party and the Muslim Brotherhood,” said Kamal.

Now, he observed, the ashes of the NDP building reflected a party in need of desperate repair, the police had lost authority and collapsed and the military remained neutral as it took power in the interim.

“And so it seems the only organization that is still intact and actually got stronger is the Muslim Brotherhood,” added Kamal, his hands trembling slightly as he rested his tea cup in its saucer and as the chaos of Cairo with traffic, horns blaring and people shouting all swirled below the balcony.

“The Muslim Brotherhood will be a strong political player,” he added.

Among the more reform-minded leaders in the NDP, Kamal is worried about the Muslim Brotherhood’s potential for ascendancy on a political landscape where he believes the secular opposition parties will simply not have time to organize in the six-month timetable the military has given for a turnover of power to civilian government.

Read Inside the Muslim Brotherhood: Part One

“The Muslim Brotherhood want to establish a religious state based on their interpretation of Shariah. They will try to use the democratic mechanisms to come to power. And once in power, they’re going to restructure the whole state to fit their ideology. And I don’t think they will leave power afterward. And Egypt might become a second Iran,” said Kamal, leaving the last word to hang ominously in the air.

By most estimates, the Brotherhood stands poised to take about 25 percent and perhaps up to 30 percent of parliament if elections are held soon. They will be a political force, but they are not professing any desire to take over the country. At least, not yet. And still other analysts believe the United States will have to engage with the Muslim Brotherhood and that there is sound reason for Washington to move quickly to do so while the Brotherhood is still positioning itself in a new Egypt.

Heba Morayef, director of Human Rights Watch in Egypt, said she has dealt with the Brotherhood from both sides of the human rights spectrum. VIctims have suffered detainment, torture and abuse under the regime and HRW has advocated for them, she said. But the movement’s platform on women and the minority rights of Christians are extremely conservative and questionable from a human rights perspective. Still, Morayef says, she believes the old fears of the Muslim Brotherhood are unfounded.

“I don’t believe the very simplistic narrative of the government, that the Egyptian government has sold the West and has sold the Egyptian people over the past years. That narrative is that the Muslim Brotherhood is waiting for one opportunity to get into power, to break off the Camp David Agreement, to turn Egypt into Iran. Too simplistic,” she said.

To calm some of the jitters in the secular opposition and perhaps in the West, the Muslim Brotherhood leadership announced that it will not field a presidential candidate in any upcoming election. And it was not until days after the revolution had ended that the party announced its intentions to register a political party for the first time in its history. Previously, it has been banned because Mubarak feared its power and because the constitution currently forbids any political party from being overtly religious.

The leaders say rather than aggressively pursuing political leadership, they will focus for now on reconstituting the Brotherhood’s network of social services, such as health clinics and schools, which they have traditionally offered to poorer areas of urban centers in Cairo and Alexandria. Those operated under the radar under the Mubarak regime and in recent years much of that social services network was shut down.

One of the key questions in Egypt will be how the constitution is rewritten particularly around Article 2, which states that the foundation of the constitution is Shariah law, or Islamic law. It was a secular youth movement that ignited the revolution and a religious movement that helped sustain it. This balance between secular democracy and political Islam will be tested in the new Egypt.

There are some who even believe the Muslim Brotherhood was changed by the events of the revolution, particularly its young leaders. The 20-somethings, like Mohamed Abbas, who served on the Revolutionary Youth Council, were the ones who pulled the Brotherhood’s old guard to participate in the demonstrations. They were the ones who worked shoulder to shoulder with young leaders of secular opposition parties to keep the demonstrations rolling and to make clear their demands.

Amr Hamzawy, a political analyst in Cairo, explained that the young Muslim Brotherhood leaders were far ahead of the old guard.

“Those out there in Tahrir Square have in fact moved beyond the movement. It is the young members which are stating and telling and informing the old guard what to do. And they are trying to catch up. And they are not catching up,” said Hamzawy.

That was evident in the square on Thursday, Feb. 10, when Abbas was on the stage in the center of Tahrir Square leading a crowd of hundreds of thousands. Mubarak was supposed to step down, but when it became apparent that he would try to cling to power, Abbas took the microphone. In a thunderous speech to the crowd, he called on them to stay in the streets. And understanding that the military will play a critical role in the weeks and months ahead as Egypt rewrites its history, Abbas appealed to the crowd on that issue.

“The army has to choose between the regime and the Egyptian people,” he shouted through a microphone and a tower of speakers that had been set up by the Brotherhood.

It was a powerful moment and within 24 hours Mubarak would be overthrown. In that moment, it was clear that Abbas and the other young leaders of the Muslim Brotherhood understood the core issue, which is how the military will deal with civilian rule.

And it set the stage for Abbas and others to be part of defining the future of Egypt. The day after Mubarak was toppled, Abbas along with a half dozen other members of the Revolutionary Youth Council was invited to meet with top brass in the military.

Shadi Hamid, a director of research at the center for Middle East policy at the Brookings Institution, is an Egyptian American who came to Cairo to see the revolution firsthand. We talked in the elegant environs of the Cairo Marriott on the banks of the Nile, and he said the Egyptian military and the U.S. government were both wary of the Brotherhood.

But he said they would have to get over it and recognize that they are a powerful new force, and by far the most organized opposition group.

“The Brotherhood is likely going to play an influential role in the coming years. If Egypt becomes democratic, the largest opposition force in the country is going to be part of that, of that new political scene. So the U.S. has to find a way to be okay with that, and to start engaging with the Brotherhood.”

He added, “I think now is the time to do that because the U.S. has leverage with the Brotherhood now. After the Brotherhood comes to power, it might be too late at that point. And if the U.S. wants to make clear, for example, what some of the red lines are.”

“For example, the peace treaty with Israel,” he said, referring to the 1978 Camp David peace agreement between Israel and Egypt which the Brotherhood has said it would recognize but which it would want to put to a popular vote.

“It’s time to have that conversation with Brotherhood leaders, sooner rather than later,” said Hamid, adding, “America just has to accept that much has changed and that the revolution in Egypt is part of a whole new political landscape in the Middle East.”