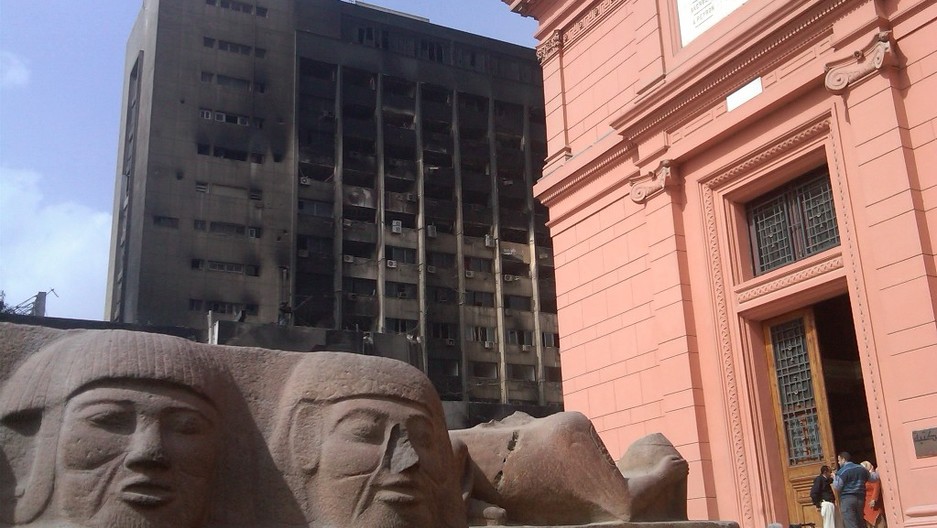 Share
By Ben Gilbert On Jan 28, the worst fears of Egyptologists seemed about to come true. Protestors battled security forces near the famous Egyptian Museum, home to tens of thousands of precious artifacts. Shots rang out and Molotov cocktails flew. As Egypt's police force evaporated, the museum became a target for looters. Director Tarek el Awady said thieves rappelled into the museum from the roof. "From this window it was broken, and they came. One looter fell here and completely broke this showcase, the frame was completely broken, glass everywhere, and he was wounded, and this is his blood," Awady said. "He was badly injured, the first one who came in the museum." It's not clear how many objects are still missing — - at least ten. And another 20 were damaged. The most valuable, a 3000 year old statue of King Tut's father, is being restored after having been found outside the museum by a protestor. Despite the damage and missing artifacts, Egypt's archeological sites opened Sunday for the first time since late January. Cairo's Egyptian museum was one of them. Past a line of tanks and soldiers holding assault rifles, Young Egyptian scouts lined up at the museum's iron-gated entrance to give visitors fake flowers and little Egyptian flags. Two Dutch citizens, Sebastian Fondham and Elaine Strauss, lingered outside the museum sporting safari hats and sunglasses. Adventure tourism? I asked them if they were into adventure tourism. "No no no, not at all, we're not heroes at all," Fondham said and laughed. "I was a little bit afraid when I came here, but it's over, it's gone. The people are happy, I'm happy," Strauss said. Fondham added, "It's like the falling of the Berlin wall, or the spring in Prague, it's the same feeling about it." The couple arrived Friday and plan to stay for ten days. One bonus of being here now is they don't have to wait in long lines. Their tour guide, Reeham Sapree, 23, said she supported the anti-Mubarak protestors on the square. But after nearly three weeks with no salary, she said she's grateful to be back at work. "I was 18 days in my home, without work. It was very hard, but I'm happy it happened, we are all happy here," Sapree said. 'Chasing Mummies' A million tourists fled Egypt during the unrest. Now, Egypt's eccentric Minister of Antiquities is trying to get them back. Zahi Hawass has been the face of Egypt's antiquities for decades, as star of the History Channel show "Chasing Mummies." Hawass was close to former president Hoosni Mubark. He worked in the antiquities authority for decades, and was appointed minister of antiquities earlier this month as part of Mubarak's cabinet reshuffle. Many in Egypt see him as a symbol of Mubarak's 30-year autocratic reign. Twice in the past week protestors, including recent university graduates, have gathered outside Hawass's office to demand more work, and his resignation. His response: "Get a job." "They can go and clean dishes and other things, but I don't need more archeologists, because I have a lot of them," Hawass said. Back at the museum, some Egyptian archeologists have found work as guides to the few tourists who have returned. But nostalgia isn't limited to the ancient past here. In the office of Museum director Tarek el Awady there's still a photo of Mubarak up on the wall. He said history will judge the former president. "There's no person that's 100 percent perfect. Each person has his good things and his bad things. Egypt is in the middle of a hot region. And he was able to bypass many problems," Awady said. "And he made his country one of the most safe countries in the region. So history will put him in the right place." But for now, Awady is more concerned about putting ancient history back in its right place by finding the missing artifacts from his museum.