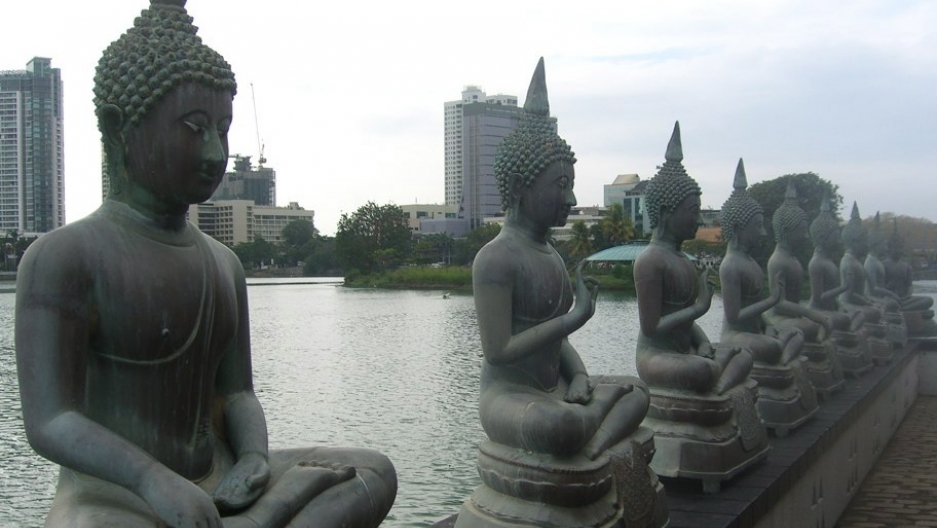 A special temple floats on the water in Colombo - you must walk across a dock to access this unique place covered in Buddha statues.
Credit: Leslie Ogden
Share

Sri Lanka is enjoying a rare period of peace not experienced for 30 years. This new stability can be seen as the nation serves as one of the hosts for the Cricket World Cup. Cricket and the beloved national team, were among the few things that everyone from separatist Tamil rebels to the Sinhalese government could rally behind, even during the height of the South Asian country's long civil war.

Another thing was food. To an outsider, the differences between Sinhalese and Tamil cuisine might be hard to pinpoint. But with a little training, you can taste the difference.

“We can identify the difference because we know what we're using,” said Wiji Latha Fernando, a Sinhalese woman living in the capital, Colombo. On a recent day, she was preparing a meal with her mother, who was using a cauldron-sized mortar and pestle. “She's pounding Maldives fish to make a dish called seeni sambol,” said Wiji.

In another Colombo neighborhood, Archana Pathmanathan, was also cooking with her mom. Her family is Tamil. Like in many places, food traditions in Sri Lanka are passed down mother to daughter. Every family has its own way of doing things. Still, Wiji and Archana both said you can make some generalizations about Sinhalese versus Tamil cooking.

Then there are the speciality items.

“Tamils use Tamarind. Sinhalese use goraka,” said Archana. Goraka, a sun-dried fruit that looks like a piece of charcoal, gives a distinct sour taste, and is key to a lot of Sinhalese food, Wiji said.

Sinhalese grind it to make a paste to cook fish and other curries, like ambul thiyal, a dry rubbed fish curry. That lack of sauce is another characteristic of Sinhalese cooking — Tamil curries tend to have more gravy.

But for all these culinary differences, there is a lot of overlap. After all, the two ethnicities have lived together for millennia on the island, through Tamil kingdoms, Sinhalese kingdoms, and three European colonial rulers.

Archana pointed out that their cuisines intersect on one ubiquitous ingredient: “To all foods, it's a must that we add coconut. Either coconut scrapings or coconut milk to curries. Maybe there's too much of coconuts here,” she joked.

Like the use of coconut, the shared parts of Sri Lankan culture endured through Sri Lanka's civil war. You could see that during cricket matches, where even Tamil rebels would trade their jungle camouflage for national jerseys.

And while they might disagree over black pepper or chili, dry curries or wet, they agree on one thing: They will tell you the food here is hotter and tastier than what's made in India. “Indians don't make it very hot,” Wiji said. It's too watery, Archana added.

The two are united in a love for Sri Lanka cuisine and disdain for what they see as an inferior product.

Cut chicken into small pieces, clean well in water and keep it aside.

Fry finely chopped onion, pepper corn and cumin seed in oil until onion is translucent, allow it to cool down and grind into fine paste.

Grind the coconut into fine paste.

In a pressure cooker, add sesame oil, cinnamon, cloves, star anise and black stone flower. Immediately add the chopped onion and fry till translucent. Add Ginger Garlic paste and fry until no longer it smells raw. Add the ground onion paste from above and , tomato and fry for a minute. Add Chicken, turmeric, curry leaves and salt and fry for 2 – 3 minutes. Add chili powder, coriander powder and mix well. Allow this to cook for about 10 minutes.

Add the ground coconut paste, water 1 or 2 cups as required and close the lid. Allow it for 3 whistles and take out from the fire. After the pressure is released from the pressure cooker, open the lid and add coriander leaves.

First wash the fish and cut it into 1-inch cubes and put them in a pan.

Place the garlic, ginger, black pepper, fenugreek, goraka and salt into a food processor or blender and grind into a thick paste. Add a little water if necessary. Add water and remaining ingredients to the fish and bring to a boil.

Reduce heat and simmer until the gravy is dry.