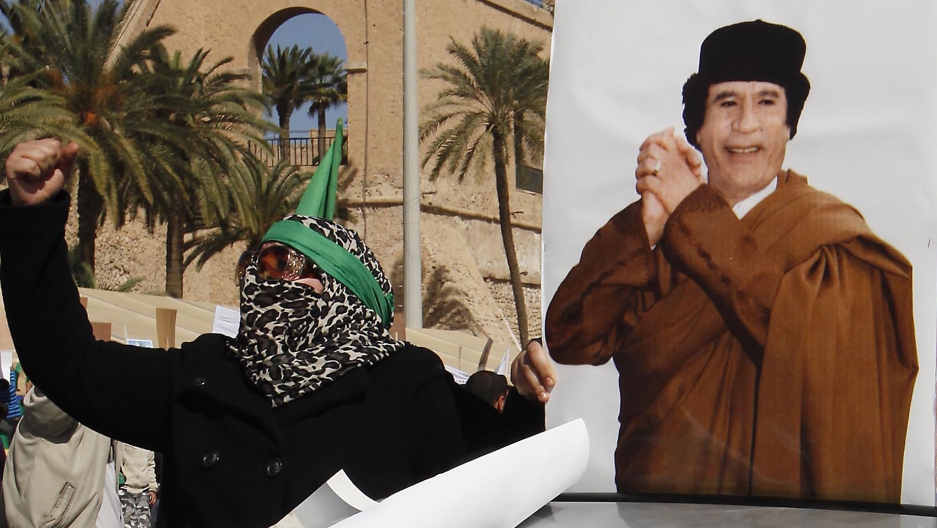 A supporter of Libyan leader Muammar Gaddafi shouts slogans next to his picture while taking part in a pro-government rally in Tripoli on Feb. 17, 2011.
Credit: Mahmud Turkia
Share

Is Gaddafi finished? We don't know for sure, but all hell seems to be breaking loose in the country today, and the dramatic events unfolding in Libya are now spreading to the global oil industry and commodities markets.

Western intelligence reports said that Muammar Gaddafi had fled Libya and was on his way to exile in Venezuela, according to William Hague, the British foreign secretary.

Earlier today, according to a self-described activist speaking to Al Jazeera, Libyan warplanes and helicopters were "indiscriminately bombing one area after another."

"What we are witnessing today is unimaginable," the activist Adel Mohamed Saleh said. "There are many, many dead."

Some fighter jets have reportedly landed in Malta, amid reports that several Libyan diplomats have left the country.

Meanwhile, on the ground in Tripoli, a witness saw armed militiamen firing on protesters who were clashing with riot police in a neighborhood near Green Square, in the center of the capital, according to the New York Times. The U.S. government has ordered all non-essential diplomats to leave the country. The EU is coordinating possible evacuations of citizens, as well.

Now oil companies are responding to the dramatic and fast-moving events.

Italian oil giant Eni — which began operations in Libya in 1959 and remains the most well-established foreign driller in the country — is evacuating "non-essential personnel." BP said that it is suspending operations in Libya and evacuating about 40 staff and their families. Statoil (Norway), Total (France) and Repsol (Spain) are all making similar moves.

The increasing violence in Libya is roiling commodity markets. Brent crude on Monday topped $105 per barrel, the highest level in about three years.

According to the U.S. Energy Information Administration, Libya holds about 44 billion barrels of oil reserves and 54 trillion cubic feet of natural gas reserves — the largest in Africa. Energy makes up more than 95 percent of the country's export earnings, according to the International Monetary Fund.