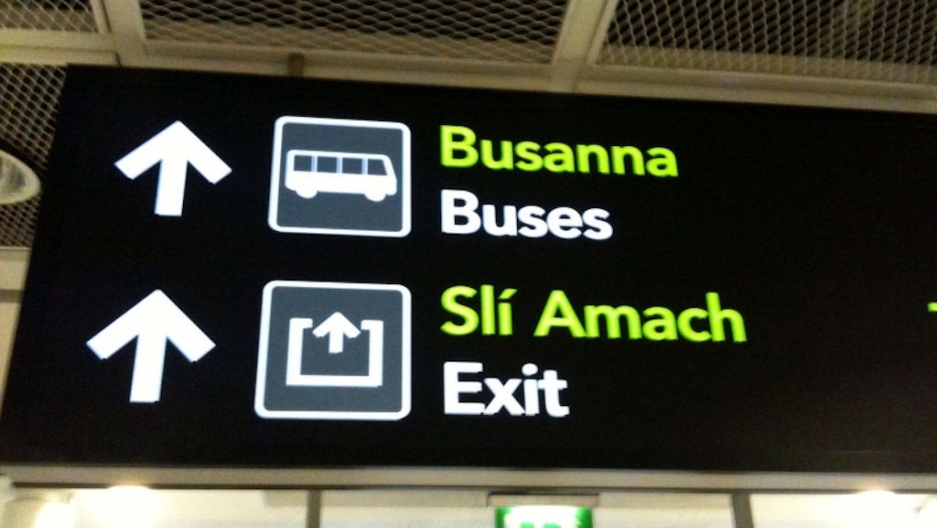 DUBLIN, Ireland — Language rights can tear countries apart. We only have to look at Canada or Belgium.

No surprise then that when a leading politician questioned the role of Irish in the nation’s schools in the middle of a general election campaign, he stirred up deep passions.

Fine Gael leader Enda Kenny proposed in his election manifesto making Irish optional rather than compulsory in schools. As Kenny is almost certain to be the English-speaking country’s next taoiseach (prime minister), this has alarmed the minority of Irish language enthusiasts.

Debate in the run-up to Friday's general election has focused on how the parties intend to deal with nation’s catastrophic finances. But in the first big street demonstration of the campaign outside the Irish parliament last week, hundreds of students staged a silent protest against the end of compulsory Irish, many with their mouths sealed with red tape to indicate their view of the effect on the ancient language.

The proposal was, however, welcomed by thousands of Irish people who bitterly resent being forced to learn a difficult language at school that they feel is of no use to them in their daily life or careers.

Irish, or Gaelic, a Celtic tongue dating back to the sixth century, is the first official language of the Irish republic. Widespread until the 19th century, it is now spoken or understood by an estimated 350,000 people from a total island population of more than 6 million. The national language is in everyday, natural use only in declining zones in the west and south known as Gaeltachts, which tend to be poor and subject to emigration, and in isolated city communities. National road signs and official documents are written in both Irish and English but Gaelic is largely ignored in commercial signage, unlike in Quebec, Canada, where strict language laws require French to dominate English at practically all levels.

Attempts by successive Irish governments since independence in 1921 to revive the language have failed spectacularly, according to Adrian Kelly, author of a 2002 study “Compulsory Irish – Language and Education in Ireland.” In the book he argues that emphasis on Irish has led to intellectual and educational wastage because it weakened students’ achievements in other subjects.

This view has been countered by domestic and overseas scholars such as Jocelyn Wyburd of the University of Manchester who has researched the decline in language learning in England.

“Students will vote with their feet because they can,” she said. “…make Irish optional and watch it wither.”

The failure of attempts to revive Irish is due partly to a traditional emphasis on the language as a cultural heritage rather than a living organism. English is the lingua franca of the country and all daily newspapers are in English, though most carry columns in Irish. There is one Irish language online daily newspaper called Nuacht24.

Another factor making people hostile to compulsory Irish is the fact that for centuries emigrants have tended to head for English-speaking countries, including Britain, the United States, Australia, New Zealand and Canada. Irish was perceived by many as the language of the kitchen and English as the language to get ahead.

Ironically Kenny is fluent in Irish, as are the country's diplomats, civil servants and army officers, who use Irish for secure communications when on United Nations missions. The Fine Gael leader argues that the language would fare better if it were not imposed on high school students but rather adopted by choice.

His case has been bolstered by the success of voluntary schools created in the last two decades where Irish is the working language. Academic achievement in these schools is regularly higher than in national schools. There are 211 such schools at primary and post-primary level attended by 4,000 pupils and the demand for spots is growing.

The three main party leaders held the first-ever pre-election debate in Irish on the republic’s Irish language TV channel, TG4, last week. It was broadcast later with English subtitles. During the debate, Michael Martin, leader of the once-dominant Fianna Fail party, blasted Kenny’s policy, saying it would sound the death knell of Irish.

But there is no mistaking the anger at compulsory Irish among those who see it as a waste of time.

An article by Anna Ni Ghallachair in the Irish Times defending government policy provoked a small avalanche of negative comments. In a typical riposte, a commenter going by "Gary J Byrnes" wrote that the people who complained most loudly about Kenny’s proposals “are those with a vested interest in the language, who receive state handouts to keep foisting it on a disinterested population.”

The Gaeltacht regions, mainly in Kerry, Galway and Donegal, receive government subsidies to promote Irish and rely on the custom of large numbers of students coming each year to improve their Irish. Though small pockets of enthusiastic Irish speakers exist in Dublin, the low level of spoken Irish in the capital city is well illustrated by a popular anecdote concerning a young Chinese immigrant who learned Irish from the internet before arriving in the country.

In a Dublin pub on his first day he asked the young barman in fluent Gaelic for a pint of Guinness. Sorry, I don’t understand, said the barman.

“I know what he’s saying”, interjected an old man at the bar. “He wants a pint of Guinness”. “Why, Mick," remarked the barman, “I didn’t know you could understand Chinese.”