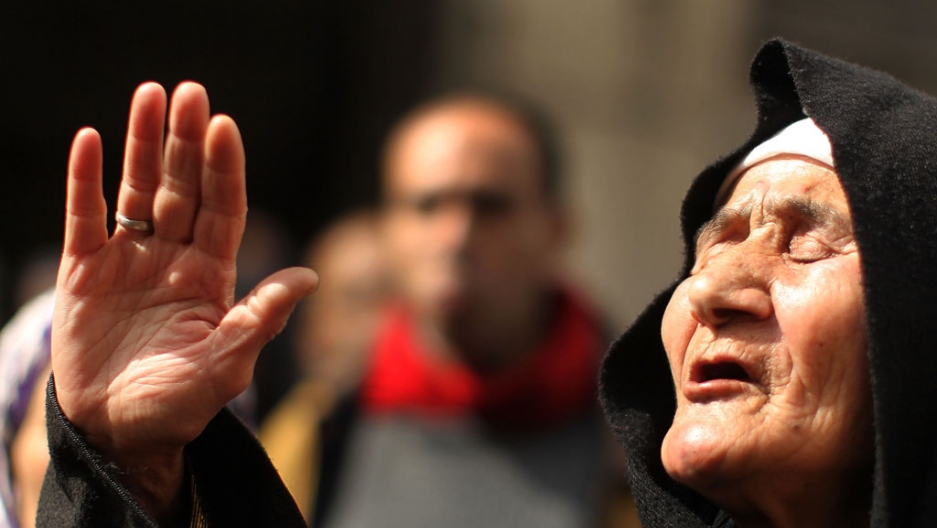 A woman prays as thousands of Moroccans demonstrate against the regime led by King Mohammed VI on Feb. 20, 2011 in Rabat, Morocco.
Credit: Spencer Platt
Share

RABAT, Morocco – Five people died in anti-government protests in Morocco and many buildings were damaged, but the nation-wide marches were not met with harsh repression from King Mohammed VI’s government.

Under a cold drizzle, thousands of Moroccans gathered Sunday in the main cities of the kingdom to demonstrate in favor of political reform. Many of the demonstrators carried out angry acts of vandalism and five people burned to death when a bank was set on fire in the northern city of Al Hoceima. In all 128 people, including 115 member of the security forces, were injured and 33 public buildings, 24 banks, 50 shops and private buildings and 66 vehicles were burned or damaged, according to the Interior Ministry.

The marches were organized by human rights activists, journalists, union members and representatives of political parties who united for the “February 20 Youth” movement which they started on Facebook to denounce a government they consider elitist and corrupt.

“I have an agenda: Equality means justice. Democracy equals a new constitution,” stated one banner. Another said: “The king should reign not rule.”

Democracy and Freedom, the group that initiated the march is asking for a rehaul of the constitution to reduce the power of the monarch and separate the powers between the king and an elected parliament.

The leader of the group, Oussama El Khlifi, an unemployed computer technician, insists that the target is not the monarch but a broken system. He expressed the urgency to have "real government, a real parliament and real justice."

Inspired by the massive protests in Tunisia and Egypt that toppled their leaders, the demonstrators — who did not express anger against the king — hope that their efforts will push the country in a positive direction. Many waved Egyptian and Tunisian flags, while others protested specific complaints of Morocco: injustice, inequality in education, health, unemployment, abuse of power, corruption, nepotism and police brutality.

“I protest against the censorship, against social apartheid: foreign schools and private clinics for the privileged, dilapidated schools dumps and hospices for the poor,” said Khadija. “I march against illiteracy. I realize that walking is not enough but I am ready for the other steps.”

Morocco’s hereditary monarchy has existed for centuries. King Mohammed VI, who succeeded his father in 1999, is seen as a reformer in comparison to his father's autocratic rule of the country. Legally, Morocco is an absolute monarchy with centralized powers held by the king.

“People want their politicians to be held accountable and they want to be able to choose their representatives,” said Prince Moulay Hicham Alaoui, a cousin of the king of Morocco who often speaks out against totalitarianism, in a televised interview on France 24. “Morocco is not an exception. We have assets: tolerance, a diverse political sphere, and a center, [which is] the monarchy, legitimate and culturally anchored.”

Moulay Hicham, a political science researcher at Stanford University, expressed support for the march, saying that the only way the monarchy will survive longterm is if it becomes constitutional.

“Morocco has not yet been reached, but make no mistake: Nearly all the authoritarian systems will be affected by the protest wave,” Moulay Hicham said in an interview with the daily Spanish paper El Pais.

The idea of a constitutional monarchy was promoted by the majority of protesters in all the cities.

The banned but tolerated Islamist political party, Justice and Charity, a long-time opponent to the regime, joined the movement and is using the opportunity to call for democratic change, according to a statement posted on their site.

In Marrakesh, some outsiders of the movement attacked a few store fronts on the main avenue Mohammed V.

The dead bodies in Al Hoceima were of "rioters who had tried to loot the bank" while others set fire to the building, according to the state-run Maghreb Arabe Presse news agency, which cited witnesses.

Interior Minister Taib Cherkaoui also said that 120 people were arrested in connection with the protests, although minors who were picked up were returned to their families. Despite the deaths and violence, Cherkaoui said the majority of protesters were peaceful.

In response to the marches, the nation’s Communication Minister Khalid Naciri promised the government will speed up reforms.

"Moroccan democracy is maturing,” he told reporters. “At a time when demonstrators in other Arab countries are met with violence, in Morocco they face institutional and political serenity. These reform demands have been part of our national agenda since King Mohammed VI came to power [in 1999.] Now we need to move into higher gear.”

Meanwhile, heated debates are taking place on the social networks. While the young organizers have used a Facebook campaign and YouTube videos to try appeal to others, many Moroccans are staunchly against the movement. They fear a revolution against the king and have posted his picture on their profile to express their devotion to him. Many have written, “Don't touch my king,” or “Don't be manipulated, we don't want unrest here.”

In contrast to governments in other Middle Eastern and North African countries where there have been protests, the Moroccan government didn’t express concern over the protests.

"Morocco is a country that has engaged, for a long time now, in an irreversible process of democracy and openness regarding liberties," government spokesman Khalid Naciri told journalists.

Preventative measures have, however, been taken to prevent mass upheavals: A few days ago the prime minister, Abbas El Fassi, announced the doubling of subsidies on basic foods. An additional 15 billion dirhams ($1.81 billion) will be added to the 17 billion dirhams provided for public subsidies in the 2011 budget.

Others warn about the possibility of an escalation of unrest in Morocco.

“The events in Tunisia and Egypt are an excellent opportunity for the European Union to encourage reforms in Morocco,” wrote the political expert José Ignacio Torreblanca in El Pais. “We do know that many of the triggers of Tunisian and Egyptian revolutions are present and that claims of young Moroccans are very similar.”

The organizers of the march plan to continue their peaceful efforts for change, hoping to have a positive impact on their country.

“The [Feb. 20] campaign is a great example of eloquence, of political sophistication and of dignity,” Moulay Hicham said. “As a Moroccan, I am proud to see young people creating a bright political discourse.”