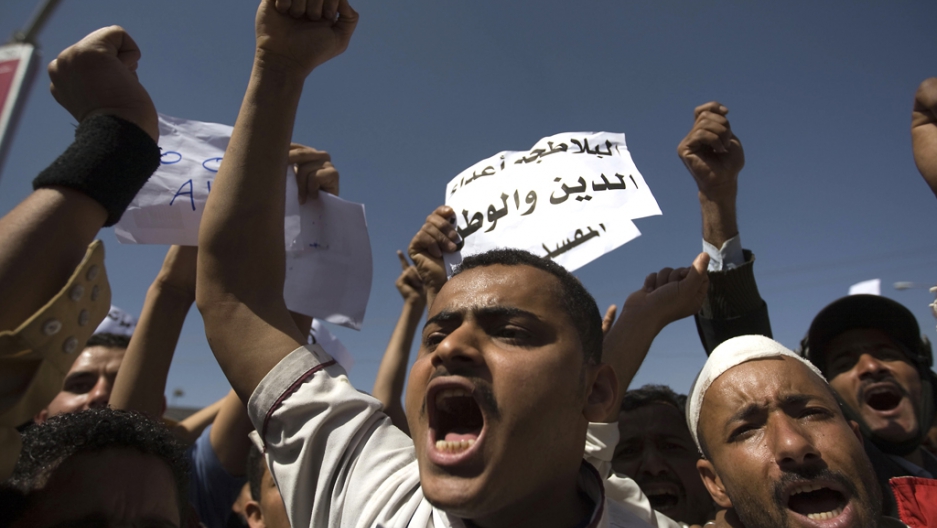 Yemeni anti-government demonstrators call for the ouster of President Ali Abdullah Saleh during a protest in Sanaa. For the first time, police opened fire on protesters outside Sanaa University, wounding four and one remains in critical condition.
Credit: Ahmad Gharabli
Share

SANAA, Yemen — Three activists were shot and another was injured in front of Sanaa University on Saturday, as pro-government demonstrators opened fire on a crowd of 1,000 protesters calling for the ouster of Yemeni President Ali Abdullah Saleh. Following reports of shootings during demonstrations in the cities of Aden and Taiz, this is the first instance of protesters being shot in the capital, Sanaa.

Over the past two weeks Yemen has been rocked by some of the biggest anti-government demonstrations the country has seen in a decade. Saleh, who has ruled for 32 years, faces widespread complaints of corruption. Many protesters, spurred on by uprisings across the Middle East, are pushing for Saleh to step down, though a large portion of demonstrators are calling for changes in their livelihood as well as political reform.

As shots rang out Saturday, protesters began to disperse in several directions. A 21-year-old Sanaa University student was shot in the abdomen and rushed to nearby Kuwait University Hospital by Red Crescent personnel. His condition is now stable. Foreign journalists were asked to leave the hospital by several police officers as ambulances carrying injured protesters began arriving.

Muhammad Noman, 23, had specks of blood on his hands. “Someone standing right next to me was shot in the stomach,” he said. He added that he had seen two other people shot as well.

“There were three people shot. One in the stomach, one in the face, and one in the foot,” said Amar Abdul Jalal, 25.

Minutes after the shooting took place, anti-government protesters began to regroup further down al-Dairi Street close to the university. Cries of, “The people want the regime to fall,” could be heard, as pro-government suppoerters rushed out to meet anti-government demonstrators carrying clubs, sticks and chains.

The two sides, comprised of 500 people each, began throwing large stones at each other in a pitch battle. The anti-government camp was pushed back further while pro-government groups continued to advance on them amidst sporadic gunfire.

“The government is not listening to the grievances of the people. Saleh is negotiating with tribal Sheikhs and rival politicians, this is the only way for our voices to be heard,” said Hashem al-Sufi, a student at Sanaa University.

“In the past three days, we have all come to demonstrate unarmed. The violence against us is unprovoked. Saleh is using plainclothes policemen to terrorize us,” said Adel al-Sarabi, 22.

As the number of anti-government protesters dwindled, Saleh supporters began to file off the street. A small but determined group of about 75 anti-government demonstrators stood in the middle of an intersection and began shouting, “After Mubarak, go Ali.” After refusing to leave the intersection, two trucks carrying 50 police officers armed with batons and riot shields broke up the remaining demonstrators.

As people scattered, foreign journalists were approached by police officers who demanded that their cameras be handed over. Camera memory cards containing pictures of the day’s protests were confiscated.

On Feb. 18, the U.S. Embassy in Sanaa issued a press release condemning violence against peaceful demonstrators and called on Saleh to use restraint when dealing with protests, stating, “The attacks are contrary to the commitments that President Saleh has made to protect the right of Yemeni citizens to gather peacefully to express their views.”

Ten members of the General People’s Congress, Yemen’s ruling party, resigned on Saturday morning after parliament refused to debate the issue of violence against peaceful demonstrators.