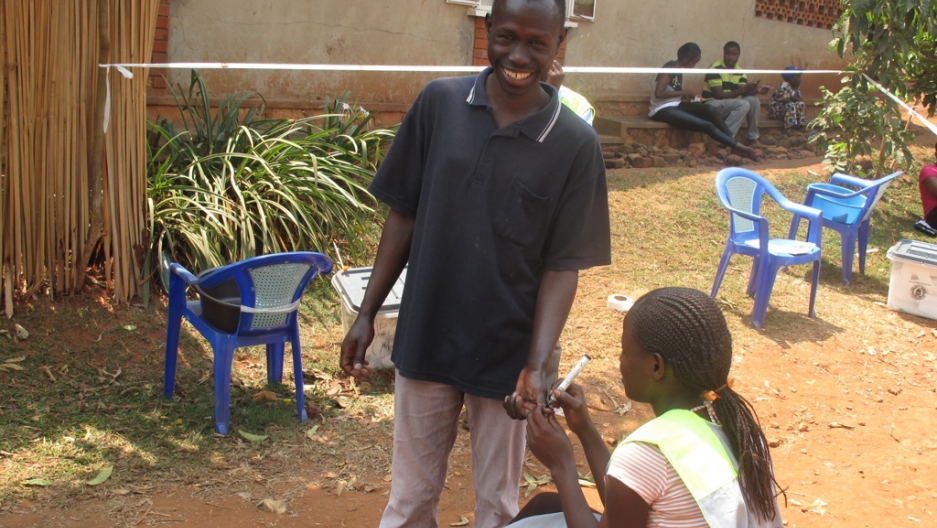 KAMPALA, Uganda — Today as Uganda goes to the polls, it becomes the first sub-Saharan African nation to hold an election since the demonstrations that toppled longtime rulers in Tunisia and Egypt.

Many are watching to see if the "winds of change" will blow southward to Uganda.

Ugandans are offered the choice of change, with seven opposition candidates, or the stability of 25 years of rule by President Yoweri Museveni and his National Resistance Movement party. One of those Ugandan voters is Jemie Ondoga.

“I am looking forward to voting today,” said Ondoga, 28, a domestic worker and married father of two. “This is my first time to vote and I am voting for change for me and my family,” he said, smiling as he arrived at the polling station at Mutungo parish.

The Mutungo poll area is in a large compound containing a church and a primary school and long lines of voters which snake around the buildings.

Nationally a record turnout of 13.9 million registered voters is expected, out of Uganda's total population of nearly 33 million. Today marks Uganda’s second multiparty election since its independence in 1962.

Ondoga walked up to the table to confirm that his name was on the registry.

“It is there,” he sighed in relief. He was going to get the chance to cast his ballot for his candidate, Olara Otunnu of the Uganda People’s Congress. Otunnu is one of eight presidential contenders, who, like Ondoga, hails from the war-torn northern region of Uganda.

“I am going to vote!” said Ondoga.

Several people in line ahead of Ondoga claimed to have registered, yet their names did not appear on the registry. Many produced receipts to prove that they had previously registered, but were nevertheless turned away from voting. Independent presidential candidate Samuel Lubega claimed that he, too, did not find his name on the registry.

Uganda’s electoral commission did not issue new voter ID cards prior to today’s vote. This was a major campaign issue; including juvenile, foreign and 139,000 deceased voters found on register rolls, for opposition parties who accused the commission of rigging the elections.

Despite the disappointment for some, the overall atmosphere at the Mutungo polling station was relaxed, even upbeat as Ugandans exercised their constitutional right.

However, Uganda Red Cross spokesman Michael Nataka confirmed a death and several injuries, including the shooting of a journalist, as a result of clashes between the military and voters in Mbale, in eastern Uganda.

Observers from the Commonwealth, the group of former British colonies, reported that at some polling stations, there has been a large number of military and police “carrying machine guns.” Some opposition candidates claim that voters are intimidated by the military and are afraid to vote.

Uganda’s military say the increased show of force is necessary because there have been threats from Somalia's Al Shabaab rebels. The Islamist Al Shabaab group claimed responsibility for the twin bombings that hit Kampala on July 11, 2010, killing 74 people.

Presidential candidate Norbert Mao, voting in Gulu, northern Uganda, alleged, “voters showed up with voting cards yet they were told that they were not registered ... this is an attempt by the electoral commission to disenfranchise voters.”

Gulu is where relatives of Joseph Kony, the infamous Lord’s Resistance Army, were scheduled to vote. Kony's uncle told local media that Kony will honor the will of the people.

In some areas ballot boxes arrived unlocked and there have been arrests of men accused of offering money to voters in Masaka, 92 miles from Kampala. The men were alleged to have a bag of coins worth over 3 million Uganda shillings or a little less than $1,300.00. They were arrested for bribery as they tried to distribute the money to voters.

Most worrying, many people in the vast and remote northeastern region of Karamoja were not aware that today was an election, many did not vote.

In Kampala, Jemie Ondoga succeeded in casting his ballot.

“I am happy that I got to vote for my candidate” said Ondoga after pressing his ink-stained thumb on the ballot paper and stuffing it into the box. “Everything went fine. I didn’t see any of the international observers in Mutungo, I guess we didn’t need them.”

Observers from the United States, the European Union, the Commonwealth and the East African Community came to monitor these elections.

After raising his thumb to show that he voted in his first election, Ondoga returned home to his family to eagerly await the results of his nation’s election, expected over the weekend.