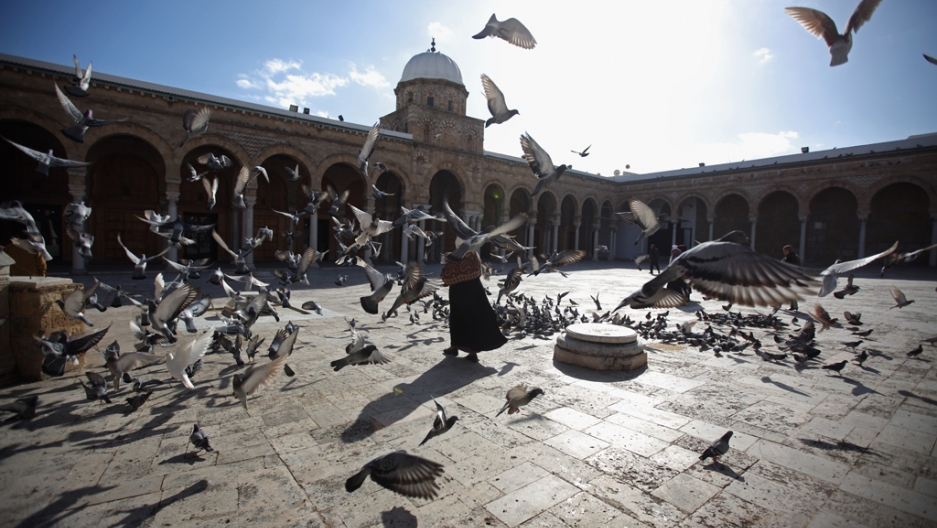 People arrive at the Zitouna Great Mosque for Friday prayers as Tunisians begin to get back to a normal routine as an un-easy peace hangs over the country after protests in January that ousted leader Zine al-Abidine Ben Ali from his post.
Credit: Christopher Furlong
Share

TUNIS, Tunisia — The dusk call to prayer echoes throughout the warren of alleyways near the Al Khadra medieval gate, summoning the Muslim faithful in this old medina as it has for hundreds of years.

But at the centuries-old Sidi Guisem mosque, change is in the air.

The small entrance to the mosque, once shut except for short periods five times daily during prayers, is now open around the clock. The Friday sermon there no longer ends with requisite praise to the country’s former strongman president, Zine al-Abidine Ben Ali.

And worshippers there say they are no longer scared to pray.

In the weeks since the ouster of Ben Ali, whose secular government brutally suppressed the nation’s al-Nahda Islamist movement over his 23 years in power, conservatives in Tunisia are now reveling in the newfound freedom to worship.

But for Binnour — a member of al-Nahda — the freedoms did not come easily.

Binnour, along with 20 other members of the congregation at Sidi Guisem, spent years as a political prisoner in Ben Ali’s notorious detention centers, where he was beaten, tortured and kept in isolation.

Thousands of Tunisia’s Islamists were imprisoned throughout Ben Ali’s 23 years in power.

Now, as Tunisia’s interim government trudges forward to restore stability in the country and plan for the upcoming general election — scheduled for no later than July — preparations are underway to grant amnesty to all the political prisoners tried and held during the previous era.

And al-Nahda, once banned from participation in politics, is re-emerging and has officially applied for a party license.

Across the Arab world, from Tahrir Square to the streets of Bahrain, Tunisia has been seen as a model of inspiration by anti-government protesters similarly hoping to topple autocratic leaders.

But some in Tunisia — especially those who suffered the worst abuses under Ben Ali’s repressive regime — are finding that overthrowing a corrupt leader is only the beginning. Former political prisoners, while dreaming of a new democratic post-revolutionary Tunisia, still bear scars of the old regime that will likely take years to heal.

“I’ve been out of prison since 1992,” said Kamal Belgassem, a 48-year-old shopkeeper near the Sidi Guisem mosque. “But I still feel like I’m living in another prison.”

Belgassem was arrested in 1991 while demonstrating at a political rally in solidarity with Iraqis during the first Gulf War. He was charged with belonging to a banned group, al-Nahda.

He is now almost completely deaf, after suffering repeated blows to his ears by interrogators during two stints as a political prisoner. Beatings on the soles of Belgassem's feet have permanently scarred his ankles, and he is unable to fit into shoes other than sandals.

“It wasn’t always physical torture,” said Belgassem. “Sometimes we were held in rooms next to people who were being tortured. We could hear people crying, then the guards would come in the room and say, ‘You are next.’”

Ben Ali, ever fearful of an extremist takeover in Tunisia, had thousands of al-Nahda members jailed and summarily tortured during his 23-year reign.

The worst period was in the early 1990s, after al-Nahda won around 15 percent of the seats in the 1989 parliamentary election.

Ben Ali’s internal security force was massive — around 200,000-strong — and ruled with fear and complete impunity, according to human rights groups.

Police would frequently follow citizens in the streets as an intimidation tactic to prevent activism, according to Erik Goldstein, deputy director of the Middle East and North Africa division of Human Rights Watch.

Some were arrested simply for visiting jihadi websites on their personal computers.

“With very few exceptions, political prisoners [under Ben Ali] were not people with blood on their hands,” said Goldstein. “They were mostly arrested for non-violent crimes. And the government did not treat Islamists like normal prisoners.”

Beatings, forced hangings from chains and extended periods of isolation were common for political prisoners.

Members of the security services were not immune either.

Police forces were sometimes arrested to serve as an example or warning to others, in order to maintain strict loyalty to the regime.

Tahami Hajammar, a former security official, was arrested in 1991 while praying at a mosque. During his four-year imprisonment, he was often tortured by being dunked into buckets of refuse water while dangling upside-down from a ceiling during interrogations.

“This often happened five times a week,” said Hajammar, 45, outside the Sidi Guisem mosque. “The interrogators would insult me, shouting, ‘Where is your God now? Do you think he will save you now?’”

The country’s interim government purged around 30 members of the feared Interior Ministry earlier this month, in an effort to rebrand the image of Tunisian police forces.

Still, several instances of police abuse have been documented since the departure of Ben Ali in January.

In early February, two demonstrators were killed and a police station torched during clashes with security in central Tunisia.

Calls by the government to end torture in Tunisian prisons have been widely lauded, but have not stopped demonstrations outside the country’s Justice Ministry.
Last week, protesting lawyers in Tunis called for greater reform in Tunisia's judicial branch, which many view as a corrupt system that processed unfair trials of prisoners during Ben Ali's regime.

Some former political prisoners and members of al-Nahda, like Binnour, only envision justice coming in the form of future political participation for his once banned movement.

Hundreds celebrated the return of al-Nahda’s exiled leader, Rachid Ghannouchi, to the country in late January.

And despite having served the longest period of detention — 14 years — of all the worshippers at the small Sidi Guisem mosque, Binnour says he is no longer angry with his former prison guards.

“Of course the high officials under Ben Ali should be held accountable,” said Binnour. “But at a certain point, we all have to stop, forgive, and say, ‘Let’s just move on with our country.’”