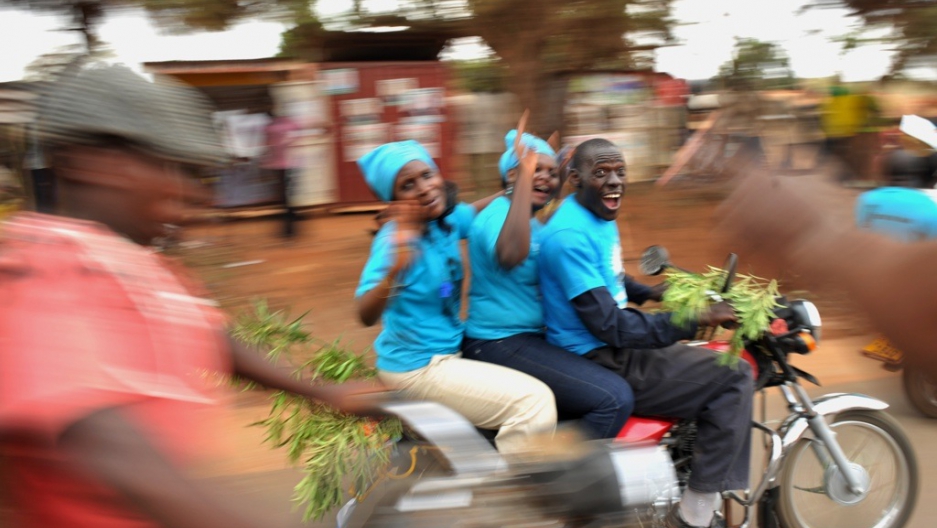 A supporter of Ugandan opposition leader Kizza Besigye cheers as the presidential candidate rides past in Kampala, Uganda on February 16, 2011, the last day of campaigning for presidential elections. Veteran President Yoweri Museveni predicted a landslide victory in polls this week, dismissing Besigye's assertions that Uganda was ripe for an Egypt-style uprising.
Credit: Roberto Schmidt
Share

LAKE ALBERT, Uganda — The shimmering fringe of Lake Albert in Africa’s western Rift Valley is where Uganda’s past and future collide, where an ancient subsistence economy meets a new one based on oil extraction.

A drilling rig, 70-feet high, towers above stumpy acacia and shady mango trees, overlooking little fields of cassava and homes made of mud and thatch.

Pieces of blue and red ribbon flutter from bushes and long stems of grass direct workers in orange jumpsuits to the paths they cut through the undergrowth and around huts. Later cables dotted with receivers will read the signals as explosions are detonated underground to reveal the subterranean structure and where the oil might lie.

Tullow Oil, a U.K.-based oil exploration company, may have discovered as much as 2.5 billion barrels of oil here, enough to change everything in Uganda, a poor country with little in the way of industry. This is what is at stake in Friday’s election in which President Yoweri Museveni will seek to extend his 25-year rule in the face of a challenge from his former friend and main opponent Kizza Besigye.

The value of the oil windfall is estimated at $2 billion a year for the next 20 years. This is a huge sum when compared to Uganda's annual budget of $2.4 billion or its GDP of $17 billion.

So far 35 wells have been drilled as Tullow seeks to pinpoint the true size of the oil find. Only one well has come up dry.

“The hit rate here is phenomenal,” said John Birch, a consultant geologist, sitting within the wire-fenced perimeter around the just-completed Kigogole-6 well.

“I’ve been in this industry 30 years and I’ve never seen anything like the Rift Valley,” he said.

Tullow struck oil in 2006 and first production is now expected early next year, scaling up to a possible 150,000 barrels per day over the following three years.

Finding the oil was one thing, getting it out is quite another. Uganda is a land-locked country and the oil itself is waxy, like a candle, so a 800-mile pipeline to the Kenyan coast would have to be heated above 100 degrees Fahrenheit (38 degrees Centigrade) to keep the oil flowing.

Museveni has demanded that instead of exporting crude oil a refinery should be built allowing Uganda to sell fuel to other countries in the region and profit more from the resource. With China’s national oil company and French giant Total set to buy into the Lake Albert oil find the $2 billion refinery looks likely, which will enable Uganda to refine as many as 150,000 barrels per day.

Three of the wells drilled so far are within Murchison Falls National Park and conservationists are concerned about the threat of pollution, destruction of habitat and disruption of wildlife migration patterns.

“They are going to drill in the parks, they are going to extract oil: It is a political reality that is pointless to oppose,” said one resigned conservationist. “If managed properly oil extraction can be done without destroying the environment, but do they have the will, the expertise? There is also the potential for some very damaging social and environmental impacts.”

Ken Opitto, field operations supervisor at Tullow’s Bugungu camp just outside the park dismisses the concerns. “Most people make noise without coming to see what is actually on the ground,” he said. Opitto added that once the post-drilling clean-up is complete all that is left is red pipe like a fire hydrant with a chicken wire fence around it.

Of Uganda's population of 33 million, an estimated 35 percent live below the poverty line. Hopes are high that the oil will dramatically boost the country's economy and provide much needed jobs.

In Hoima, a regional town close to Lake Albert, there are great expectations of the improvements and opportunities that the oil will bring.

“They have already constructed a road and some boreholes,” said Morris Odero, an 18-year-old motorbike taxi driver, sitting on his bike at the side of the newly built dirt road. “We have not benefited much from jobs but it is early days and we hope that will come.”

In Hoima’s busy market, fishmonger Julius Byarinhanea, 40, said: “We are all waiting for just one thing, to get that oil so that we can get more jobs."

“We are going to work very hard,” he said eagerly, “and the government must spend the money very well.”

Opitto, Tullow's operations manager, agrees: “The big question is what we Ugandans will do with the revenues.”

There is widespread concern, given Uganda’s worsening reputation for official corruption, that the oil windfall may be squandered, stolen or siphoned into private bank accounts rather than invested in the roads, schools, hospitals and infrastructure the country so desperately needs.

High-stakes squabbles over control of the oil money that flows into state coffers might also undermine Uganda’s democracy, which is still stabilizing after a long history of civil war and single-party rule.

John Mary Odoy, director of the Democracy Monitoring Group in the capital Kampala, warned: “If the oil is badly managed it will affect our emerging democracy very badly.”