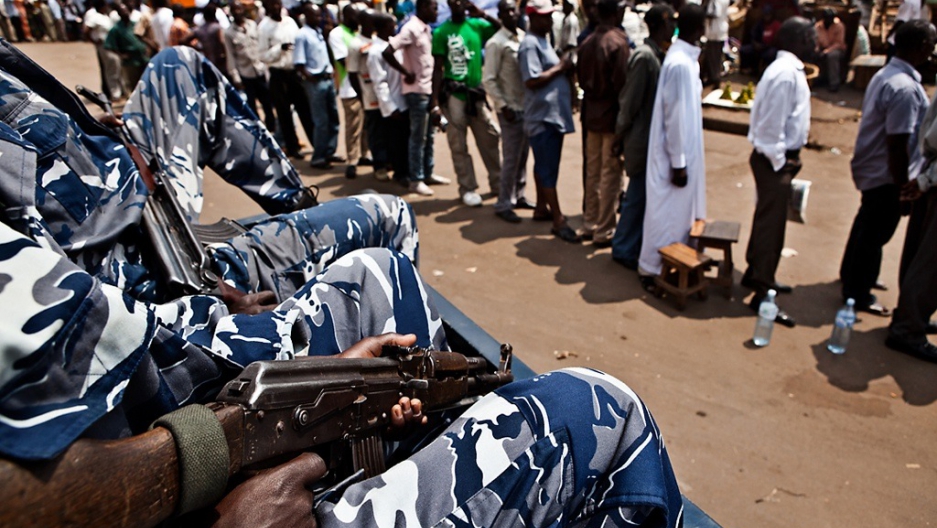 There is high security across Uganda during voting for the presidential eleciton Friday.
Credit: Charlie Shoemaker
Share

KAMPALA, Uganda — Voting was slow in Uganda’s presidential election Friday in which President Yoweri Museveni is widely predicted to extend his 25-year rule against his main opponent, a man he has defeated in two previous votes.

In downtown Kampala a morning haze hid the rising sun, women and men swept yesterday’s garbage into the gutters with straw brooms and electoral officials laid out desks and ballot boxes ready for the voters. But there were few of them.

One of the first to vote at an outdoor polling station set up in the car park of a shopping mall was Moses Jabo who, like many in Kampala, an opposition stronghold, supports Kizza Besigye, a former friend of and doctor to Museveni, who is running for the four-party opposition coalition, Inter-Party Cooperation.

Jabo, who comes from the north of the country, accused Museveni of ruling in the interests of his own ethnic group that hails from western Uganda. “Museveni is one-sided, he only rules for Westerners, he doesn’t care about us in the north,” he said.

For the first two decades of Museveni’s rule a brutal rebel group, the Lord’s Resistance Army, terrorized northern Uganda forcing up to 2 million people to live in the squalor of huge camps for displaced people. Peace has returned to the region in recent years after the rebels were pushed into neighboring countries.

Although Uganda has attracted international attention over proposed anti-homosexual legislation that calls for the death penalty for some gay acts, neither Museveni nor opposition candidates focused their campaigns on the issue.

The streets of this usually traffic-clogged capital were transformed on Friday: There were few cars on the roads and the city felt like a ghost town except for the squads of police in new blue camouflage fatigues and armed with AK47s who walked the sidewalks or sat in knots on street corners. Pick-up trucks full of soldiers and police cruised the streets to deter any unrest and, say security officials, protect the population against any repeat of the terrorist bombings that killed more than 70 people in July.

Throughout his campaign opposition leader Besigye has threatened to order his supporters into the streets in emulation of the popular protests that have toppled long-standing leaders in Tunisia and Egypt.

After casting his vote in Rukungiri, the western Uganda region where he was born, Besigye reiterated the threat. "This time we are not going back to the courts. Our people are the courts, they should decide what to do with the next elections,” he said.

In the days before the election Museveni responded to the threat of street protests. “There will be no Egyptian-like revolution here,” he told journalists in the lakeside town of Entebbe on Wednesday. “We would just lock them up … bundle them into jails and that would be the end of the story.”

Nevertheless, on the eve of the vote Uganda’s state-run communications commission ordered mobile phone companies to block text messages that included the words "Egypt" or "Tunisia" and the phrases "people power" or "tear gas."

The high security presence suggests the regime is ready. A few weeks ago China — which is set to help Uganda exploit newfound oil wealth predicted to be worth around $2 billion a year — delivered $30 million worth of uniforms, anti-riot equipment, batons, shields, tear gas and water cannons to Uganda’s police force.

“It is like they are preparing for war,” said John Mary Odoy, director of the Democracy Monitoring Group. “When you see so many of these police your mind is not peaceful. It is the opposite: The people are scared. It is intended as a threat.”

After voting, motorbike taxi driver Innocent Muwezi eyed the police nervously. “The incumbency fears the opposition that is why the police are there, to threaten and intimidate us,” he said. “Museveni knows what happened in Tunisia and Egypt.”

“It is intimidating,” agreed Andrew Mwenda, an influential journalist and political commentator, “but that is the trade-off that has to be made for security.” Mwenda said that fear of political unrest and violence had caused many to leave the city and to stockpile food and fuel supplies.

But early reports on election day itself suggested there had only been a limited repeat of the violence and intimidation that marred previous elections in 2001 and 2006.

There were two incidents of shooting outside the capital and observers reported some cases of pre-marked ballot papers and registered voters being refused the opportunity to participate.

A spokeswoman for Museveni's ruling National Resistance Movement said her party was satisfied that the vote was free, fair and peaceful, an appraisal challenged by an opposition spokeswoman.

After polls closed at 5 p.m. local time counting began immediately and full results are expected on Sunday. If, as predicted by opinion polls, Museveni wins a fourth term he will become one of Africa’s longest-standing leaders, in charge since seizing power after a bush war in 1986.