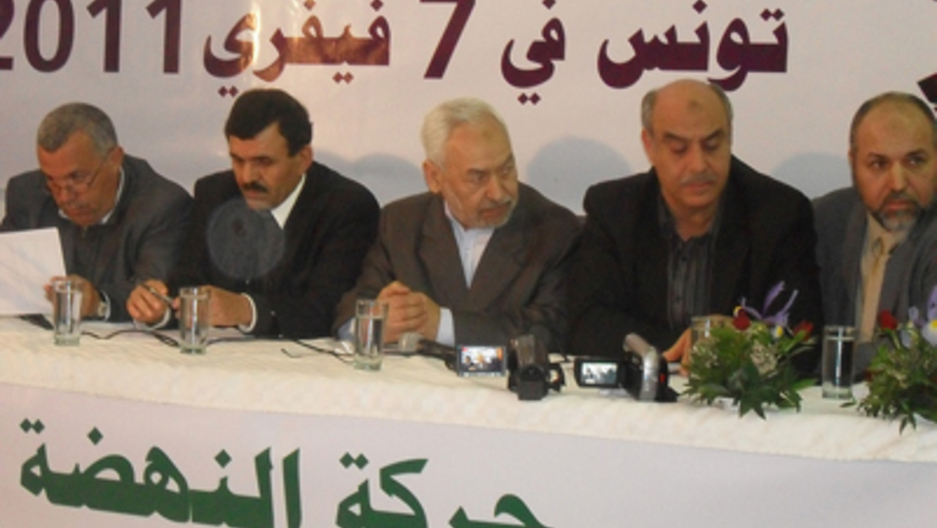 Share
By Sabri Ben-Achour of WAMU After decades of repression in Tunisia, former opposition groups are gearing up to participate in democratic elections, following the ouster of dictator Zine El Abidine Ben Ali. One group that many are keeping an eye on is Tunisia's main Islamic party. Its leaders have returned from abroad and, in some cases, from prison. Sadok Chourou served as president of the Ennahda, Tunisia's main Islamic party, from 1988 to 1991. That year, he was arrested by the Tunisian government. His party was outlawed, and he spent 20 years in prison, where he said he was tortured and kept in solitary confinement. Chourou got out of prison a few months ago. "I am still having a hard time realizing that I am out and free," he said from his home in the town of Mornag. A complicated history The Islamist movement in Tunisia has a complicated history going back to the early 1970s. Its members have occasionally supported Tunisia's political establishment and embraced pluralism. At other times they have advocated overthrowing the government and launched terrorist attacks, particularly in the 1980s. In 1990, the party mobilized protests against the first Gulf War and galvanized students. The former dictator Ben Ali responded with brutal repression, said Chourou. "In order to eliminate them all without leaving any trace, the government imprisoned all members of this party, which 30,000 people!" While Chourou was in prison, Ennahdha's leaders in exile stressed pluralism, democracy, and human rights. This is something the party's leaders are publicly stressing now. "We do not force women to put on the veil," Chourou said. "We want them to be free in choosing whether or not to wear the veil or not. I have a daughter, for example, who doesn't wear the veil and another one that does." Chourou insists Ennahdha does not want an Islamic state or Islamic law. "In the Quran, God says there is no compulsion in religion, meaning we must not compel anyone," he said. He added that Ennahdha won't take part in the presidential race in six months, though it will likely participate in municipal elections later on in order to raise the group's profile. "Ennahda is not yet well known to the new generation, since its members were locked up for so long," Chourou said. Outreach to a new generation In a sign that the party knows its potential demographic, Facebook ads encouraging people to learn more about the party popped up within weeks of Ben Ali's ouster. On the outskirts of Tunis, a group of mostly older Tunisians gathered for a book signing by leftist author remain deeply suspicious of Ennahdha and its motives. Remili said that the Islamists know Tunisian society. "They are keeping a low profile, so people will accept them. But I don't even want to talk about the idea that they might come to power," the author said. Another skeptic, Moncef Benslimane, a professor of architecture, said the Islamic Party he remembers from the 1980s was conservative, dogmatic and at times violent. "There were fights on college campuses and there was no democracy or discussion — just fists and bullets. So there's that violent strain in their political expression, which is worrisome," Benslimane said. Respect for a peaceful revolution He added that it remains to be seen whether Ennahdha will respect this peaceful revolution. On Friday, there were reports that Islamists tried to set fire to a red-light district in Tunis. But William Zartman, a professor emeritus at the Johns Hopkins, said those protestors don't represent mainstream Islamists in Tunisia. He said that the thinks that Tunisians can take Ennahdha at its word. "I think it's pretty fair to judge the party on what it's saying now, in part because the militants have been destroyed," Zartman said. While Ennahda was in exile, it made alliances with secular groups. Mouldi Riehi, a founding member of the Democratic Forum for Labor and Liberty — a secular and liberal opposition party, said, "People have to stop demonizing them. Ben Ali played on this demonization to say to the West 'choose between us — the strong state that's in control, or the Islamists,' " Riehi said. Hajer Barbari, a 20-something blogger, said that Islamists have a place in the new Tunisia, though she does wonder what their "real" position is. "But from my point of view, nothing is clear right now," Barbari said. We're for a free Tunisia, she added, where everyone can practice what they please.