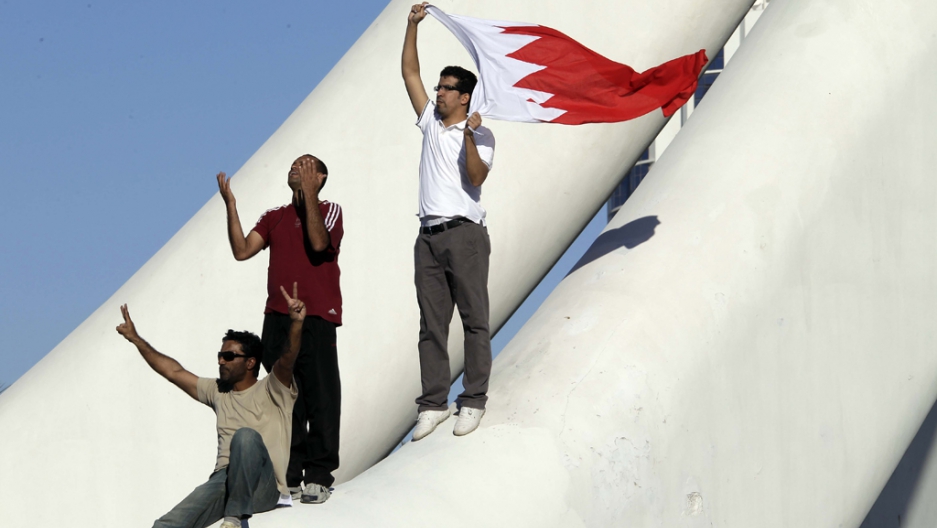 Bahraini anti-government protesters cheer on the foot of the sculpture in Pearl Square in Manama, as thousands return to the focal point of anti-regime demonstrations, after a military withdrawal.
Credit: Joseph Eid
Share

RIYADH, Saudi Arabia — Thousands of protesters poured back into Pearl Square on Saturday, singing and dancing in celebration following two straight days of a bloody crackdown.

In apparent response to international calls for restraint, Bahrain leaders withdrew their tanks from the square, a large area in the capital of Manama, on Saturday. On Thursday and Friday, government forces in the tiny island state had been quick to open fire on peaceful protesters.

Crown Prince Salman bin Hamad Al Khalifa addressed the nation on television Saturday, appealing for calm and political dialogue. "Citizens of Bahrain, let's work together with all political blocks to help return the security situation to normal so we can announce a day of mourning for those we've lost," Salman said.

Protesters around the square cheered, "We are victorious," according to reports. Though there were still some wary calls to do away with the Sunni monarchy in the largely Shiite country.

As many as 50 people were injured in clashes on Friday, which occurred in the late afternoon as hundreds of youths who had attended the funeral of a protester killed earlier began walking to Pearl Square. Early Thursday morning, security forces raided an open camp where protesters were sleeping and in the ensuing violence of tear gas and rubber bullets, at least three people were killed.

And despite the military withdrawal Saturday, some protesters remained skeptical of the regime's intentions.

For Saudi Arabia, the arrival in Bahrain of the protest fever that is sweeping the Middle East has huge ramifications and means big worries. The two states are both led by kings and are close allies.

Having just seen two other Arab leaders defenestrated from their presidential palaces in a matter of weeks — in Tunisia and Egypt — the Saudis are in no mood to let another one bite the dust.

The Saudis have made no official statement so far on Bahrain’s turmoil, as the demonstrations, which began Monday, grew larger throughout the week.

But the Saudi view of events in Bahrain were clearly on view Wednesday when foreign ministers of the Gulf Cooperation Council, the grouping of six Gulf states, held an extraordinary session in Manama and issued a statement in support of Bahrain’s monarchy.

The statement also rejected outside interference in Bahrain’s domestic affairs, which was probably meant for ears in both Washington and Tehran.

“I emphasized how important it was that, given that there will be both funerals and prayers tomorrow, that that not be marred by violence,” U.S. Secretary of State Hillary Clinton said, describing a telephone call she had with Bahrain’s foreign minister on Thursday.

For Saudi Arabia, both Iran and the United States are to blame for the current wave of open dissent that is splashing through the Middle East. Riyadh views Iran as an octopus-like interloper in Arab affairs, stirring up trouble everywhere in attempt to surround the kingdom with turmoil or pro-Iranian proxies. Sunni-Shiite sectarian feelings are running high in the region.

At the same time, Saudi Arabia was jolted by Washington’s willingness to influence events in Cairo during the revolution in favor of the protesters and then dump its ally of 30 years, Egypt’s former president, Hosni Mubarak.

The United States has also been a close partner of Bahrain’s ruling family, which has allowed the U.S. Navy Fifth fleet to be stationed in its waters.

Against this backdrop, the Saudis see Bahrain as critical to their security for many reasons. The two are both Sunni Muslim monarchies, though Bahrain has an elected parliament. But even more significantly, both have unhappy Shiite minorities who feel disenfranchised and discriminated against. This unites Bahrain and Saudi Arabia in deep distrust of their large and bellicose neighbor across the Gulf — Iran — as they fear it will use their domestic Shiite discontent to stir up internal problems.

Bahrain’s population is almost 70 percent Shiite, and their grievances are behind this week’s protests, although a small group of liberal Sunni Muslims also joined the demonstrations.

Saudi Arabia’s Shiite minority is much smaller, about 10 percent of the kingdom’s 22 million citizens. But it is a minority that feels totally shut out of the government, and it is located mainly in the country’s oil-rich Eastern province.

A small peaceful protest that lasted about an hour took place in a Shiite village called Awwamiya near the predominantly Shiite city of Qatif on Thursday morning, according to a Shiite community activist, Jafaar al Shayeb. The protesters were demanding the release of Shiites being detained by the government.

“The government here I think is very worried” about events in Bahrain, Shayeb said.

There have been unconfirmed reports out of Bahrain that Saudi military personnel and tanks have been sent there to help maintain the government’s security. The Bahraini foreign minister denied this when asked about it by a journalist at a press conference this week.

Bahrain is easier for Saudis to get to than Puerto Rico is for Americans. A long causeway links the two countries over the aquamarine waters of the Gulf, which carries students, businessmen, tourists and ordinary Saudis in search of fun to the small island every day. Unlike Saudi Arabia, Bahrain allows movie cinemas and alcohol.

But this week, Bahrain has allowed only those travelers with urgent needs through its doors.