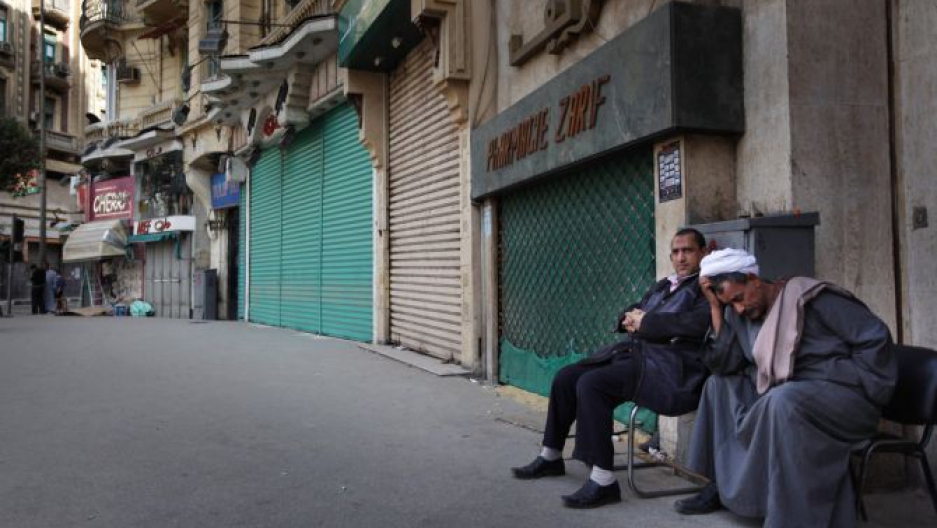 Local men sit next to closed shops on Jan. 31, 2011 in Cairo, Egypt. Most shops remain closed after more than two weeks of protests against the rule of President Hosni Mubarak.
Credit: Peter Macdiarmid
Share

CAIRO, Egypt – Diaa el Fishawy puffs furiously on his shisha pipe, blowing thick curls of honey-scented smoke throughout the empty room. It’s early in the afternoon, but he’s already on his fifth bowl of the day.

El Fishawy’s namesake coffee shop, nestled in a narrow open-air alley in Cairo, is renowned throughout this capital city for never having shut its doors in over 200 years of its existence. Recently, though, a military-imposed nighttime curfew ended Diaa’s legendary streak.

Behind him, an old television flickers the now familiar scene of Egypt’s anti-government protesters cheering and singing in Tahrir Square.

El Fishawy sneers at the screen. Reform in Egypt might be good, he said, but a room full of customers would be even better.

“Of course I want change, like them. But it’s time to move on already. I mean, just look at Tahrir — it’s turned into a carnival,” el Fishawy said. “We just want our normal lives back.”

Stymied by still swelling crowds, which came out in some of their largest numbers on Tuesday and spread beyond Tahrir Square with a march to Parliament, and the resilience of pro-reform protesters demanding the ouster of President Hosni Mubarak, Egypt’s government now appears to be attempting to end the turmoil in Cairo with a forced return to normalcy.

Banks, restaurants and fruit stalls have reopened throughout the city. Military checkpoints were eased, allowing people and traffic to flood back onto the streets. Gone are the nightly echoes of gunfire, replaced once again with the cacophony of incessant honking.

Cairo, however, is still far from normal.

And far from Tahrir Square, many Egyptians are growing weary of the demonstrations. The anti-government protesters are increasingly viewed as stubborn troublemakers for not accepting the once unimaginable concessions made by Mubarak — including the promise to resign after his term ends in September.

Nowhere is the frustration more apparent than in the ancient Khan el-Khalili bazaar, a vast labyrinth of covered alleyways twisting and turning throughout the historic heart of what is known as Islamic Cairo.

Shopkeepers working in the Khan el-Khalili’s gold, carpet and souvenir shops fear not only the continued disruption in business from the protests — but also the fact that normalcy seems many months away from becoming a reality.

“I am all for reform, but what’s happening in Tahrir is not right. They got Mubarak to say he would resign in September — what else do these protesters want?” asked Ohan Yazejian, 40, an Egyptian pottery vendor of Armenian descent. “I mean, they’ve waited thirty years for change, why can’t they wait another seven months?”

Tourism is a major source of revenue for Egypt’s economy — and after the Pyramids at Giza, the Khan el-Khalili is often the second stop on any visit to Cairo.

Tour buses and swarms of camera-wielding foreigners once overran the cramped and winding passages in the Khan el-Khalili.

Vendors hawking glass perfume bottles and stuffed camels stitched with “I love Egypt” patches could easily haggle with customers in as many as 10 different languages.

Now the market is almost entirely devoid of life.

Cafes and restaurants lining the square next to the famous El Hussein Mosque are empty. Coppersmiths, who used to create such a racket forging lanterns and crescents, now sit bored, biding their time by drinking tea.

Many shops are simply shuttered.

Tarek Mohamed drags nervously on his cigarette from a rickety stool alongside a medieval arched gateway. With the five-star restaurant next door now closed, Tarek doubts that customers will be buying hip scarves and belly dancing outfits from his stall.

“There are negotiations going on now. Why don’t the protesters let the government try to fix things?” Tarek said. “Egypt needs stability. Of course there are problems with trust, but they need to try.”

Safety is still a concern for vendors, following several nights of looting in late January.

Silver, gold and Bedouin jewelry shops were targeted during the initial days of unrest, following the departure of police forces from the streets of Cairo.

Over 100 pounds of gold was stolen from three dozen jewelry shops, according to Yazejian, the pottery dealer.

Ashraf Akram said the owner of the gold shop where he works decided to move all of their merchandise to his home, locked away in a safe.

Most of the Khan el-Khalili’s precious metals shops still are not displaying wares in their front windows.

“Egyptians proved during the uprising that no one could stop them. The problem though, is that the thieves also realized that too,” Akram said.

Security and stability on the streets, said shopkeepers, is the only way foreigners will ever come back to Egypt and the Khan el-Khalili.

Although some police have returned to the market area, their plainclothes presence is less pronounced than in other parts of Cairo.

Following a week of harassment and arrests of local and foreign media, security forces in the Khan el-Khalili still seemed interested in preventing journalists from snooping around looted shops, demanding to know, “Where you work?”

That type of impunity is exactly why the uprising started, said Mohamed Said, a taxi driver parked on the busy street outside the entrance to bazaar.

“Twice now I’ve been forced to pay corrupt traffic police 100 Egyptian pounds (around $20) under a threat of paying a bigger, bogus fine,” Mohamed said. “And for what? As if I don’t have my own children to feed?”

Over 1 million foreign tourists fled Egypt during the uprising, costing the country about $1 billion, according to Egypt’s vice president.

Many merchants in the Khan el-Khalili worry that it will take months to reestablish an environment that makes foreigners feel comfortable enough to return.

All the storeowners are feeling the pinch, but not everyone is eager to race back to business as usual.

Hatem Said sells Egypt soccer jerseys and other touristy trinkets from a small shop in the heart of the market. Customers, he said, are non-existent.

Even still, the 28-year-old vendor said he has been haunted by images of the dead victims killed in Egypt’s unrest, now draped on large posters in Tahrir Square.

Seeing pictures of Egypt’s “martyrs,” he said, is reason enough for protesters to continue pressuring the regime from Tahrir.

“I know once they leave Tahrir that business in the Khan el-Khalili will start coming back,” Hatem said. “But protests are working — look at the concessions the government is giving them. Change in Egypt is finally happening.”