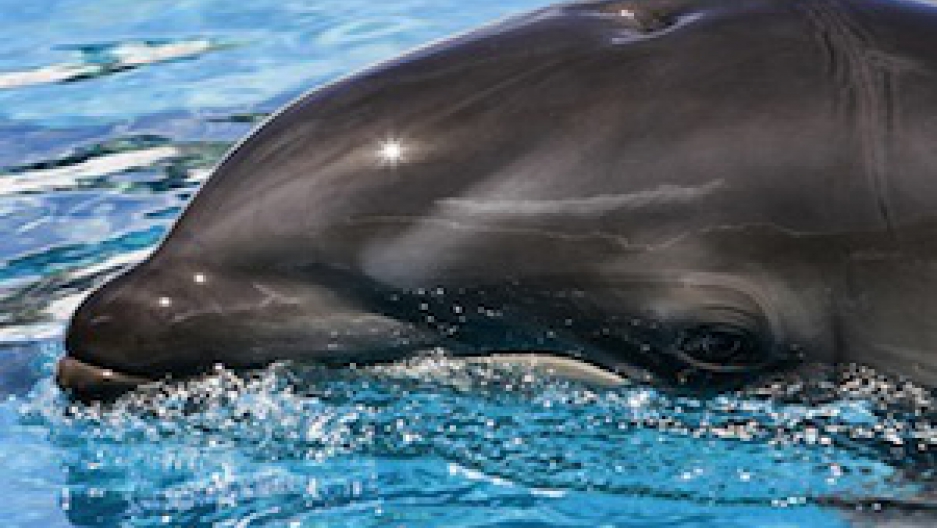 Photo of a dolphin (By Flickr user Mark Interrante (aka pinhole) (cc:by-sa))

Jacques Cousteau called the ocean "The Silent World," and he gave that name to his 1956 underwater documentary. But while it's mostly silent to us, to its regular residents, the ocean can sound like a busy street corner. And researchers are studying how human activity is making the ocean a lot more noisy.

Ocean animals use sounds to identify themselves and communicate with others. It's also how they figure out what's around them. Being able to hear is vital. For dolphins, deafness is disorienting.

"In the dolphin's world, if you even have a 40-decibel hearing loss, your range of echolocation is going to drop by a hundred fold," David Mann, an associate professor of biological oceanography at the University of South Florida, told PRI's Living on Earth. "And that's basically making the animal blind."

Mann has studied hearing loss in dolphins for years. He believes that the deafness could simply be part of being a dolphin. On the other hand, he says:

If you start running hundreds of thousands of ships on the same shipping channel back and forth, you know, all of the time, and you raise the background noise like 30 and 40 decibels on average continuously, now you're affecting lots and lots of animals. And it's happening out in the ocean so it's a lot harder to actually figure out what the effects are.

"Most things that people might do in the ocean, either intentionally or inadvertently, produce sound as a byproduct," according to Susan Parks, an assistant professor of acoustics at Penn State. Parks has studied the endangered Right Whale, including how it may be affected by activities like commercial shipping.

Comparing recordings from the 1950s to today, Parks has found that the Right Whales have been forced to raise the pitch of their whale calls by about 30 hertz, or a little less than an octave. The whale calls are also getting louder, to get over the din of human activity.

"It's possible that when the noise level exceeds a certain threshold, they just stop calling," according to Parks. And that could threaten the future of the entire species.