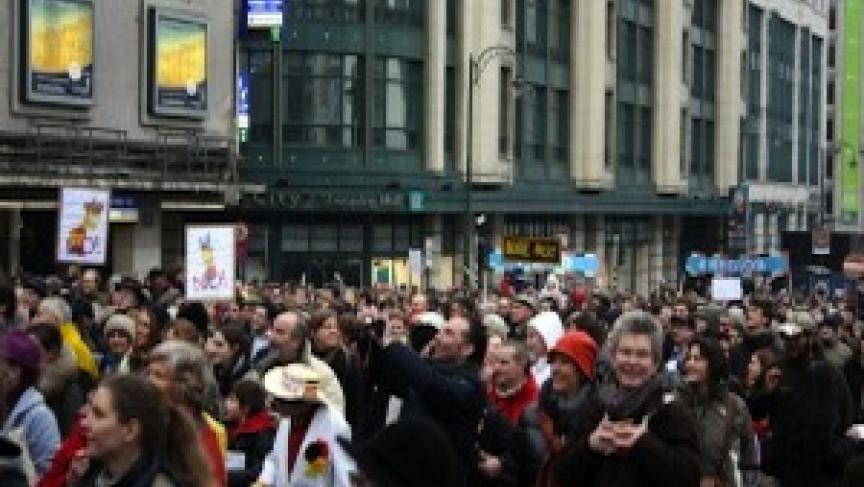 That's how long Belgium has now gone without a national government. For months, political parties from the Dutch-speaking north and French-speaking south have been trying to form some kind of coalition.

But no luck, so far — and it seems some Belgians have had enough.

This weekend, more than 30,000 Belgians marched through Brussels with a simple message for politicians — "Shame: No government, Great country."

Julie Marlier and her boyfriend, Philippe Mathot, said they are tired of paying taxes to politicians who aren't working.

"That's our money that they're spending every day," Marlier said, "and without any results. That's not normal."

Mathot added, "They're like children playing in a playground."

The Shame rally started online as a Facebook page. In fact, the web has become the platform for Belgians to voice their political displeasure. Dutch-speaking radio journalist Kris Janssens recently posted a video to YouTube.

In it, he joked, "I don't usually say much about Belgian politics, because I know it's a sure way to kill the mood at any family gathering. But I just don't get it anymore," he continued. "Do these politicians have no shame?"

The video has garnered tens of thousands of views and comments.

Belgian actor Benoit Poelvoorde also got a lot of attention for a plea he recently made on television. "Don't be surprised by this weird thing on my face," he said, caressing his stubble. "A Hairy Belgium! Let's keep our beards until Belgium gets back on its feet!"

A "Hairy Belgium" website quickly went up. More than 650 people have signed on to grow their beards until Belgium forms a government.

There is now a second beard-related website, called "A Beard for Belgium."

Another site, called "Camping 16," allows you to pitch a virtual tent in protest outside of the Prime Minister's office in Brussels — located at "16″ Rue de la Loi.

Dorian van Bever, one of more than a dozen Belgians who worked on the Camping 16 website, said these websites crystallize feelings in real life, and permit people to say they've had enough.

"What do you do if you've paid for something that doesn't work?" the site asks. "You get your money back," it reads.

The intent is humorous, said van Bever, because humor cuts across the linguistic and cultural divides in Belgium. "We choose humor because we don't want the streets to be on fire."

Perhaps the funniest online effort, though, is a site called "le record du monde," or the world record. On the site, you can watch the seconds tick down until Belgium surpasses Iraq's record of 289 days without a government.

Graphic designer Sven Grothe, who helped put the site together, said he's not making a political statement. "It's more of joke," he said. "It draws attention to the ridiculousness of the situation."

If it all sounds surreal, well, that's because it kind of is surreal.

Belgium's strong local governments ensure that trash still gets picked up, police are still on the streets, and pensions are still paid. But the dysfunction at the national level has led some commentators to consider if Belgium might be "The World's Most Successful Failed State."

Marcel Sel, an author and columnist, pointed out that when you say "failed state" and then add "successful," it's a nice portrait of Belgium.

"It sounds surrealistic, but we Belgians like to think of ourselves as being surrealistic people." He said it's a clever way to put things, though he added that Belgium is not a failed country — "not yet," he laughed.

Websites and real world rallies aside, no one expects an end to the political stalemate anytime soon. Sel said he would not be surprised if Belgium beats Iraq's world record by a wide margin, and, he jokes that if the "grow a beard for Belgium" campaign catches on, Brussels may soon more like Kandahar.