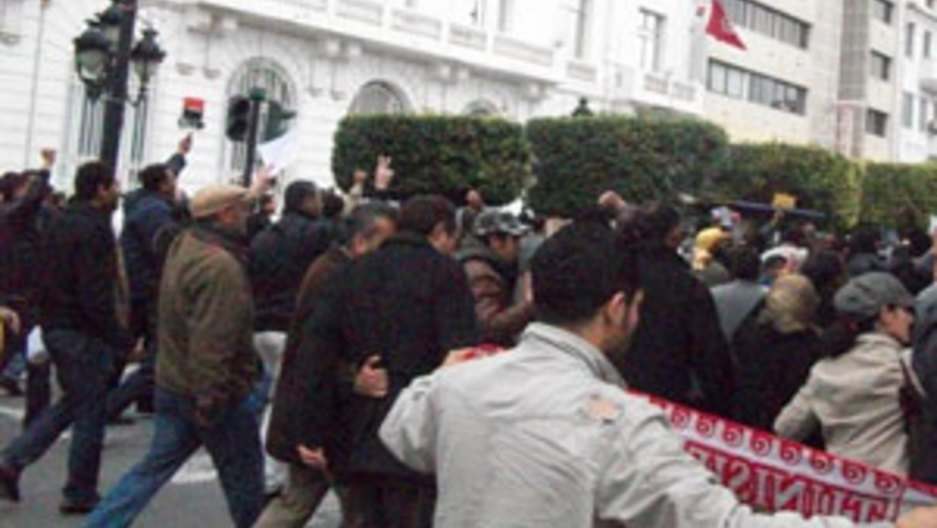 Photo of a protest in Tunisia (Image by Flickr user magharebia (cc:by))

When the built up political tensions in Tunis exploded onto the streets, the government toppled. Khartoum, the capital of Sudan, appears ripe with discontent.

Like Tunisia, Sudan has a large young population going through tough times while trying to live through painful economic austerity measures. Yet Sudan is much less economically developed than Tunisia.

Plus it has a genocidal war in Darfur and the almost certain loss of one-third of its territory.

So a day after his political party called for a Tunisian style "popular revolution," and just before a planned strategy session, Al Turabi was picked up again.

A few hundred people from a variety of opposition parties went ahead and met without him.

"The arrest of Turabi is just the beginning," a man at session said. "All the other opposition leaders should get ready to go to prison with him. The torture chambers are being opened for us. Get ready for that too. We all need to agree on one goal: to team up and overthrow the government, because it can't happen unless we work together."

The gathering seemed more like a pep rally than a forum to make any decisions.

"We swear we will remain handcuffed no longer," a woman said enthusiastically at the session. "We will break out of jail and overthrow you because we are fearless, because we are fed up with all of those who are governing us. Today is a feast for us to build our strength and start afresh."

The crowd shouted and chanted to show support. "Allah Akbar" or "God is great" was the most common.

In Sudan, nearly all political parties are Islamic. As in Tunis, Khartoum's recent economic austerity measures are helping to focus anti-government anger.

Popular congress party leader Ibrahim Al-Sanosi read off a list of small enterprises that the government wants to tax even more.

The revolution in Tunisia is giving Sudanese hope, according to Al-Sanosi. But he says the winds of change were brewing here well before what happened there.

The government's economic program is highly unpopular, but so is the genocidal war in Darfur and the loss of one-third of the country's territory in the recent referendum.

"The momentum of the revolution is already starting before Tunis," Al-Sanosi said. "The opposition they have decided before Tunis that they should depose Bashir."

Khartoum has experience with political change from the streets. In fact, Sudan was the last Arab country before Tunisia to topple its leadership through street protests -- in both 1964 and 1985.

Albaqir Mukhtar, who runs a Khartoum-based non-governmental organization, said the public is dispirited by the earlier revolts, which often ended up putting corrupt regimes in power.

Mukhtar said if current opposition leaders want the people's trust, they'll have to earn it.

"If you want us as people to take to the streets, be in front of us, if there [are] guns and bullets, tell us you will be the first to receive them," Mukhtar said. "If there is oppression and violence from the police, tell us you will protect us. This is our condition."

Massive protests wouldn't be easy to gather in the Khartoum of 2011, however. The security apparatus built by President Omar Al Bashir is far-reaching and brutal.

Rabie Ati, from the ruling National Congress Party, questions why there's talk of overthrowing the President at all; he was elected by the people last April.

"We are not worried," Ati said. "We believe that this government is coming by the people, I don't think the people will work against their will."

But international vote monitors said the polling did not meet standards for free and fair elections.

At Khartoum University, where the 1985 revolt started, there's something called a "speaker's corner" here, but it's more or less reserved for student members of the ruling party. One student at the university I spoke to said right now, Sudan can never be like Tunisia.

Anger and desperation are building, students say. But they don't know what to do about it.

And the heavy-handed government keeps them from uniting.

"There are a lot of students in jail of this system, not doing anything, they say we want revolution, we want change, we want democracy," another student I spoke to said.

A medical student told me bluntly that Sudan is going to hell. But Tunisia could possibly be the inspiration to turn things around.

"I am very proud of Tunisia, really," the medical student said. "Every day when I saw them in the TV, I feel that I am happy, I feel that there is still hope. I think what is the difference between us and them? We can change."

All the talk of political change for now remains just talk. As the opposition parties gear up for their perennial fight for power, the government is cracking down on competitors to hold on to what it has.