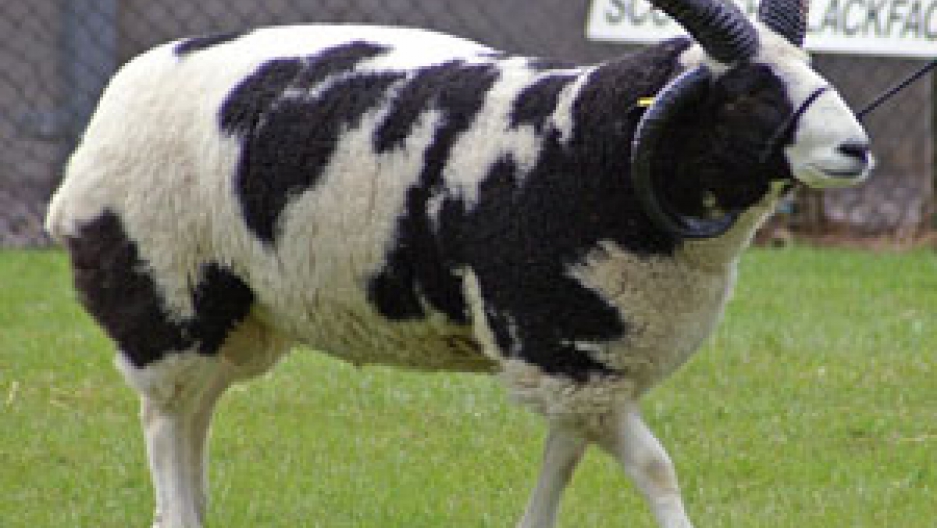 Photo of a Jacob Sheep, similar to the kind mentioned by the SVF Foundation (Image by Wikimedia user David Merrett (cc:by))

Livestock breeds are going extinct at a rate of about one per month. The SVF Foundation farm in Newport, Rhode Island, is trying to turn the tide. The organization preserves animal embryos from endangered heritage breeds to save them from extinction.

"We focus on critically endangered breeds that are based in North America that were important to the founding fathers when they started the country," Sarah Bowley, the livestock manager for the SVF Foundation, told PRI's Living on Earth. Right now the SVF Foundation is focusing on 25 critically endangered breeds of goats, sheep and cattle. Their goal is to freeze 300 embryos of each breed.

The SVF Foundation performs highly scientific lab procedures, not unlike human in vitro fertilization. Embryos are harvested from pregnant female goats and brought to the lab to be frozen. Bowley describes one of the recent actions taken by the organization:

Livestock breeds may become particularly important to save, in part because many of these animals can act as scientific models for human diseases. "For example there's a population of Jacob Sheep that are a perfect model for Tay-Sachs disease in people," Bowley told Living on Earth. "There's a pig breed, Ossabaw Island Hog, that is a perfect model for Type 2 Diabetes in people." She continues:

So, if there's a disease outbreak or a certain texture or flavor of meat that's desired or any other genetic combination that these animals can solve, we want to have their genetics available, even in just a frozen form, so that they can be reawakened and brought back hundreds of years from now.

For now the embryos slumber in their deep freeze, and wait until they're called upon to resolve some crisis. And who knows, in the future the fate of the human food supply might just be resting on their horns.