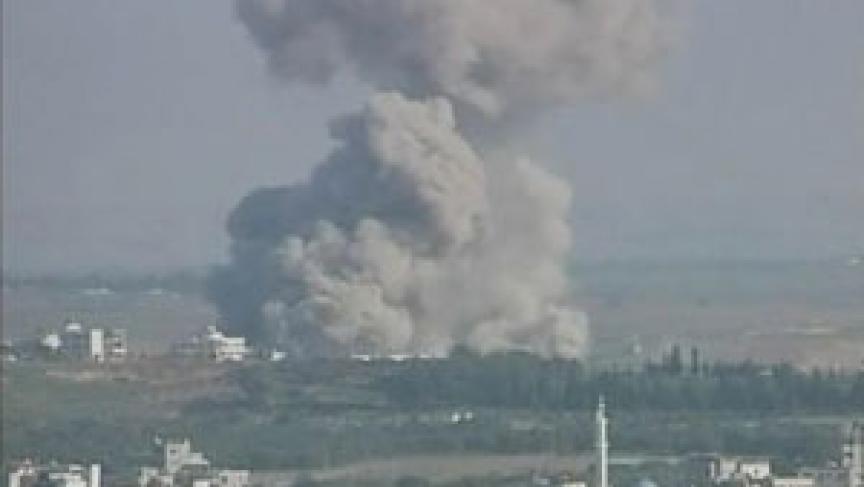 Photo of smoke in Gaza (Image by Al Jazeera (cc:by))

A group of eight college kids gets together and sets up a Facebook page and a blog. They write an online "manifesto" laced with profanity. It's political essay fueled by emotion. It all sounds pretty unremarkable, unless the young authors live in the Gaza Strip.

Two of the eight members of a group calling itself "Gaza Youth Breaks Out" agreed to meet and talk with me at a restaurant in Gaza City, but only if they could use their pen names and have their voices are altered.

"Abu-Yazan" is a fast-talking, coffee-guzzling, chain-smoking student in his early 20s. He told me the news of Tunisians overthrowing their government had been exhilarating to watch.

"They were under a dictatorship for 20 years," Abu-Yazan said. "Right now it's over. [Tunisians] can speak, they can vote, and we need the same thing."

"We voted for Hamas," he said, referring to himself and the other seven members of Gaza Youth Breaks Out. "But right now we have the right to criticize them."

And criticize they do. The group's manifesto used a four-letter word to denounce both main Palestinian factions, Hamas and Fatah.

Abu-Yazan said he and his friends believe the current crop of leaders have failed the youth of Gaza -- half of the 1.5 million Palestinians in Gaza are under the age of 18 -- and he said it's time for a change.

"Just let us speak, let us act, let us do what we can to change the situation here in Gaza Strip. Let us participate in making decisions. We're sick of being led by, I'm sorry for bad words, by a**holes, Abu-Yazan said."

Abu-Yazan said the bottom line of the group's message is that the youth of Gaza need more freedoms: the freedom of expression, political freedoms, the freedom of movement, and perhaps most importantly, the freedom to have a better future.

Abu-Yazan said he knows the possible consequences of such blunt talk in a place ruled by the Islamist group, Hamas. He said the members of Gaza Youth Breaks Out could be detained, tortured or even killed. That's why they want to remain anonymous, at least for the time being.

Abu-Awn said he cannot imagine how his parents would react if they found out what he is up to.

"Okay, my father is open-minded and he's also educated and my mother also, but according to the risky matter that we are in right now, I don't know. I really don't know."

Abu-Awn said he and the others were not prepared for the kind of response they've received. They've attracted thousands of online followers.

He also said there's been some confusion about the group stand for. Abu-Awn and his friends are not just fed up with Palestinian leaders. They are fed up with the international community, the United Nations and the United States.

Abu-Yazan said the members of the group felt compelled to issue a second manifesto to clarify where they stand on Hamas and Israel.

"Some people misinterpreted our words and started saying that, here in the Gaza Strip people [are] talking [about] overthrowing Hamas. Well, no," he said.

If their online campaign can help open doors and begin to create change in Gaza, Abu-Yazan said, they will have succeeded and that is worth the risks.