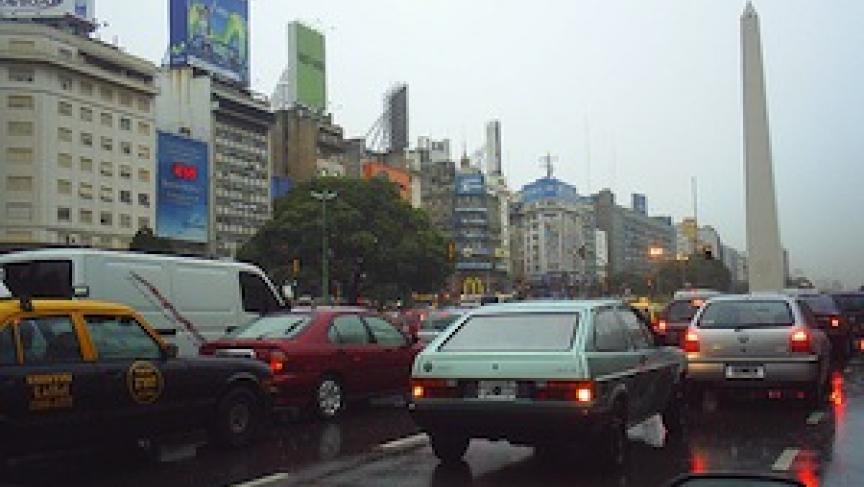 Hernan Valdez and his girlfriend Milagros Garin are the proud owners of a brand new Peugot. It';s a gray compact, immaculate, and still has that new car smell two months after they drove it home from the dealership.

"It's a lovely smell," says Valdez proudly as he shifts the car into gear. A year from now, it still might smell new.

"The traffic in Buenos Aires is pretty hectic," he says and with a great public transportation system nobody really needs to drive here. Valdez says they plan to keep the car in a garage most of the time. They'll use it on weekends or holidays, if at all.

Argentines like Hernan Valdez are buying cars to park their savings. With inflation expected to reach 30 percent next year, people reason it's better to buy a car than watch their money disappear.

"Those who can, buy property, but those who can't, buy cars," says Valdez.

Lately Argentines have money to spend. Argentina is one of Latin America's fastest growing economies, but with currency markets uncertain and double digit inflation, Argentines are turning to cars as surrogate savings banks.

Car sales among local dealers nationwide are up nearly 70 percent from last year, and inflation definitely factors into the decision to buy according to Hernan Dietrich, owner of one of Argentina's largest car dealerships.

"In one year, you can sell your car for more money than what you paid for it," says Dietrich. In the United States, a new car depreciates about 20 percent in value as soon as it leaves the lot, but not in Argentina. "Here the loss is absorbed by inflation and the equation balances out."

With chronic inflation in Argentina, there's no incentive to save. For higher income earners with access to credit, there's an added incentive to spend: you can profit.

"It's a way to earn in one year," says Hernan Valdez. To buy his new Peugot, he got a five-year loan with fixed payments at 16 percent. Yet with annual inflation believed to be 26 percent, his effective rate of interest is negative.

Branstetter says the reason Argentina has effectively negative interest rates is that the government has been underreporting its official inflation rate to help pay off its own debts. The inflationary spending works great in the short-term, but it undermines the basic foundations of the financial system and long-term growth.

Argentina has had problems with chronic inflation and even hyperinflation since the 1950s. Branstetter likens Argentina's addiction to inflationary spending to watching a relative with extraordinary potential fall prey to an alcohol problem again and again.

"There's Uncle Bob -- he's drinking again and he winds back up in jail," says Branstetter. "I mean some of us have these people in our families and it's horrible to watch."

Branstetter says Argentina's government is unlikely to act on inflation anytime soon given that tackling inflation could result in a recession and next year is an election year. Meanwhile, as Argentines spend more to save more, it stokes even more inflation.

"Those you who can't buy cars are buying flat screen televisions or cellphones," says Hernan Valdez. As a financial analyst himself at an international bank, Valdez knows this is the bright side of inflation. "This has to end sometime.You can buy one flat screen TV maybe two, but you don't really need them. You're not going to put a flat screen TV in the bathroom."