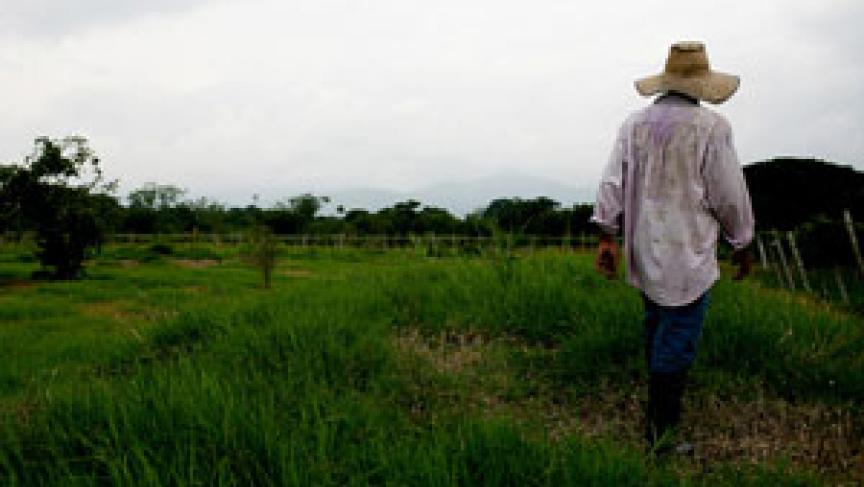 Photo of a Colombian farmer (Image from the World Bank Photo Collection (cc:by-nc-sa))

During Colombia's long-running civil war, paramilitaries, guerrillas and drug traffickers drove millions of peasants off their land. The land grabs have given Colombia one of the most lopsided ratios of property distribution in Latin America.

But as part of a new strategy to pacify the countryside, the Colombian government is returning stolen acreage to small farmers and providing them with all-important land titles.

At a recent ceremony in the town of Chaparral, government officials invited poor farmers on stage to receive titles to their land. Colombia's agriculture minister Juan Camilo Restrepo told the crowd that the government has a historic obligation to compensate farmers who lost their land.

"We are convinced that if there's no rational and just solution to the land problem in Colombia," he said, "we will never achieve a lasting peace."

Cocaine traffickers, paramilitaries and guerrillas are believed to have acquired seized some nine million acres over the past 25 years, land that was often used to grow and smuggle drugs. But even farmers who stayed on their property face problems.

Legalizing property in remote areas can be an expensive bureaucratic nightmare. As a result, 40 percent of rural properties in Colombia lack legal titles. Land titles can be used as collateral, and without them, poor farmers have no access to bank loans to buy seeds and fertilizer and improve their standard of living.

According to Ken Yamashita, director of the US Agency for International Development in Colombia, this legal limbo makes it easy for criminals to force farmers off their land.

"The people who are physically on the land don't feel they have the sense of ownership and so they're not willing to work it or protect it," Yamashita said. "And it's easy for others to come and try to push them off, which is what's happened. The displaced population of four million that we have here in Colombia is partly because of that."

In Chaparral, officials from the Agriculture Ministry helped farmers sign the final paperwork for their land titles. One of those farmers was Maria Alvirian. With her documents in hand, she said she's now eligible for a low-interest government loan.

"This paper says we are the owners of a small plot of land and this will allow us to get the loans we need to invest in our farm," Alvirian said.

A far greater challenge is the government's goal of putting five million acres of stolen property into the hands of landless peasants. Many of these plots are still controlled by drug lords but are registered to third parties who have never been convicted of crimes, so the seizure process can take years.

The most famous example involves the drug lord, Pablo Escobar. He was killed in 1993 but it took the government 15 years to expropriate his vast holdings.

Still, when the seizure process works, it can change lives.

As he chopped open a cacao pod and pried out the seeds, Francisco Gómez said he's never owned a square inch of land in his life. But now Gómez lives on one of Escobar's former properties. He and other farmers on this land raise cacao, the raw material for chocolate.

If the crop succeeds and they stay put, Gómez and his fellow cacao farmers will have the option to buy this land at a low price from the government.

"So far, we haven't harvested very much cacao," Gómez said. "But we will. This is a really good project."