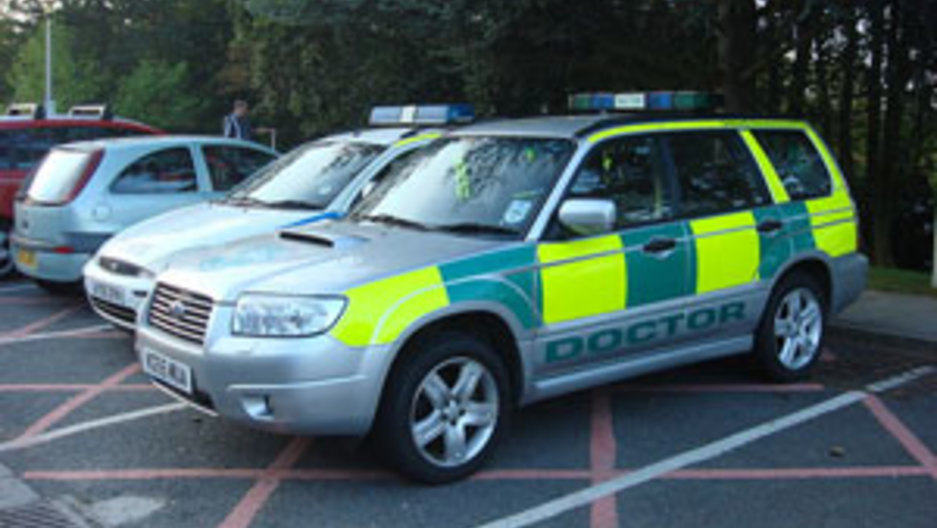 Photo outside a hospital in the UK (Image by Wikimedia user Panhard (cc:by))

If ever there were a place where the public might embrace the rationing of health care, that place would arguably be Britain.

During World War II and for nine years after, the British government rationed most food items: meat, flour, eggs, sugar. The government also strictly controlled the supply of gasoline, soap, stockings -- even the number of buttons on jackets.

Although there was wartime rationing elsewhere, including in the United States, it generally applied to fewer items over fewer years and was quickly forgotten. In Britain, however, rationing became a part of the national identity.

Many older Britons speak of rationing as a great legacy of those wartime and post-war years, when people sacrificed their own interests for the greater good.

After World War II, the British government extended this societal approach to health care. It created the National Health Service, the NHS.

Today, 95 percent of Britons get their care through the government-run program. In order to provide care to everyone, the government says it must place limits on the care it provides. It must ration.

"We have a limited budget for health care, voted by Parliament every year, and we have to live within our means," said Michael Rawlins, chairman of a government agency called the National Institute for Health and Clinical Excellence (NICE).

NICE decides which drugs and other treatments can be prescribed by NHS doctors.

NICE was created in 1999 to clarify the reasons why certain drugs are approved and others are rejected. "In the old days it used to be done in secret, behind closed doors, in smoke-filled rooms," Rawlins said. "Now it's explicit. Everybody knows what the rules are."

NICE's rationing decisions start with a basic premise: The government should spend its limited resources on treatments that do the most good for the money. NICE calculates cost-effectiveness with a widely used measure called a quality-adjusted life year (QALY).

In essence, NICE asks these questions: How much does a drug or procedure cost? How much does the treatment extend the average patient's life? And what is the quality of that life gained?

The calculations are complicated, but imagine that a cancer treatment costs $100,000 and that it extends the life of the average patient by four years. That means the cost of the treatment per year gained is $25,000.

Now imagine that for part of those four years the patient will be in pain and bedridden. NICE might figure the quality of that life at 50 percent of perfect health. Under NICE's formula, that would make the drug half as cost-effective. In other words, the result would be $50,000 per quality-adjusted year gained.

NICE has set a maximum that it will spend on a treatment: about $47,000 per quality-adjusted year gained.

NICE tends to assume, without always performing calculations, that most common treatments are cost effective -- including insulin for diabetes, cholesterol-lowering drugs for heart disease, and kidney transplants.

Instead, NICE analyzes only selected therapies, such as expensive new drugs that may extend life at the end of life. It has calculated that some of the more expensive drugs meant to slow the progression of Alzheimer's Disease and some cancers fall below the cost-effectiveness threshold. In such cases, NICE says, the NHS shouldn't pay for the drugs.

NICE chairman Michael Rawlins acknowledged that his agency's decisions deprive some patients of drugs that may extend their lives by several months or more.

"We do recognize that the end of life is a very special time," Rawlins said. "[It] allows people to attend weddings, see a grandchild born, seek forgivenesses."

But he argued that if Britain spends a lot of money at the end of life, "we're going to have to deprive other people of cost-effective care." Rawlins said that might mean spending less money at the beginning of life -- and might result in a higher infant mortality rate.

This is an excerpt from PRI's The World. For the full text, graphics, and more, visit RationingHealth.org.