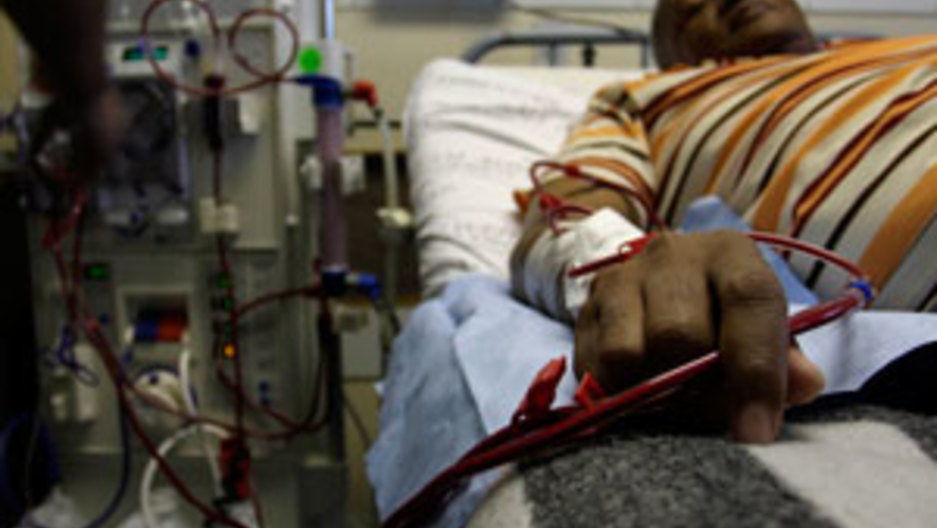 This article was part of a series on global health rationing from PRI's The World. For more, visit RationingHealth.org.

In late August, Amos Phillips, 41, arrived by ambulance at Tygerberg Academic Hospital near Cape Town. His kidneys had failed. He was confused, struggling to breathe, and desperate enough to ask doctors to end his life.

Karen MacPherson, 43, was also treated at Tygerberg that month, and she desperately wanted to live. A widow with three children, she said she had been plagued by high blood pressure, a risk factor for kidney disease, since her children's birth. "It's because of the high blood [pressure] the kidneys don't want to work anymore," she said.

Nearly 200 new patients a year seek treatment at Tygerberg Hospital for severe, chronic kidney failure. The condition can come on suddenly and affect anyone.

Some forms of kidney failure are partial or reversible. Others are permanent and fatal without treatment.

To live, both Amos Phillips and Karen MacPherson would need ongoing dialysis treatment to filter toxins from their blood. But needing treatment didn't mean they would get it.

"It is an extremely expensive disease to treat," said Dr. Rafique Moosa, a kidney specialist at Tygerberg Hospital and head of the Department of Medicine at the University of Stellenbosch. He estimated that putting a patient on dialysis costs about $10,000 per year.

"Now, for our economy, that is really a substantial amount of money to spend on a single patient," he said. "There are other major health challenges and priorities that we as a society face."

To save money, public hospitals in South Africa strictly limit the number of dialysis treatment slots. It falls to the medical staff to ration.

A committee meets at Tygerberg Hospital on Tuesday mornings to decide who will be accepted into the dialysis treatment and transplant program. The odds for new patients are not good. Currently only about one in five is accepted for the program.

On a recent Tuesday, around a dozen medical professionals wearing stethoscopes around their necks gathered in a small conference room on the 10th floor of the hospital. The list of patients to be discussed at the meeting included MacPherson and Phillips.

The question of how medical professionals choose who lives is particularly important given South Africa's history. Tygerberg was built during the apartheid era, when the government mandated racial segregation. The vast hospital has hallways that stretch out east and west, in wings that are mirror images. One side used to treat white patients. The other treated nonwhites.

For decades, a committee at the hospital has decided who gets dialysis treatment. In a recent study of historical data from Tygerberg's program, Moosa found that patient selection often fell along racial lines. "What we clearly discovered in that initial paper was that black patients were disadvantaged," he said.

The apartheid era ended with the first multi-racial, democratic elections of 1994. However between 1988 and 2003, Moosa's study found, white patients were nearly four times more likely to be accepted for dialysis treatment than nonwhites. During that period, there was little in the way of detailed guidance governing the selection process. That left patients and the public with limited insight into the basis for the committee's decisions.

Recently that has changed, at least formally. Several years ago, the government announced cutbacks that would further squeeze the dialysis program. At the same time the number of new kidney patients was skyrocketing due to a growing rate of diabetes and other risk factors.

"The main thrust of this was to be fair and equitable and transparent," Moosa said. The state government adopted the new system earlier this year. It categorizes patients based on a variety of medical and social factors.

This was the system that would be used to evaluate Amos Phillips and Karen MacPherson, the two recent patients at Tygerberg.

At the committee meeting, the hospital's longtime social worker for kidney patients, Marietjie Swart, presided. She projected a photo of Phillips onto a large screen.

The image showed a man with closely cropped brown hair lying in his hospital bed.

Phillips's doctor outlined his medical condition, and then Swart reviewed other aspect of his life that might have a bearing on the committee's decision. She began with his age and where he lives. "He can read and write," she added. "He speaks Afrikaans and Xhosa, as well."

Committee members listened for the factors they're supposed to consider when deciding whether to accept someone for the dialysis program.

Phillips "never smoked, never used any drugs," Swart continued. "He only drank over weekends with his wife, but they would only buy about four bottles, 750 ml., between the two of them." Phillips was, Swart said, "not a party animal."

That was a point in his favor. Under the guidelines, active substance abuse automatically excludes a patient from receiving dialysis.

Swart also discussed Phillips's living conditions. "It's a one bedroom house, with a lounge, kitchen, and a bathroom," she said. The bathroom had a tub, sink, and a toilet.

The guidelines call these "good home circumstances," and they, too, improved Phillips's chances of being chosen for dialysis. Doctors say having running water, sanitation and electricity is helpful for a certain type of dialysis performed at home. However, these criteria disadvantage the poorest South Africans, who often lack utilities at home.

These factors -- criminal and employment history, whether the patient is a parent -- have little to do with the chances of benefiting medically from dialysis. They are, instead, a measure of social worth.

Dr. Moosa says the committee used to weigh these factors heavily when considering patients for dialysis. "I suppose we used a utilitarian approach," he said. "The question that we used to ask ourselves -- you know, if we put this patient onto our program, of what benefit can he be to the society?"

Today those factors are supposed to be given less weight. The ethicists who helped draw up the guidelines argued that medical practitioners should not judge which patients are the worthiest contributors to society.

Judgments are often wrong. For example, former prisoners might have been falsely convicted, especially during the apartheid years. Patients who lack their own children might be helping to raise others.

Most important, the ethicists said, are medical criteria. Is the patient healthy enough to undergo a kidney transplant? If so, he or she might someday no longer need dialysis, and that would free up a slot for a new patient.

The problem is, few actually are able to get transplants. There are far more good medical candidates than there are dialysis slots. Therefore, the committee falls back on subjective criteria -- does the patient seem motivated? Does he or she have a good social support network?

The assessment committee weighed the factors in Amos Phillips's case. They had to decide whether he should be ranked "category one," the only category of patients guaranteed dialysis.

"I think he would almost be a category one patient if it wasn't for his late presentation," Moosa said to his colleagues at the committee meeting.

By "late presentation," Moosa meant that Phillips had arrived at the hospital after his kidneys had already failed. He needed to be put on life support, with a breathing tube and emergency dialysis until he was stabilized. That bumped him to category two -- not guaranteed a spot in the chronic dialysis program.

This is an excerpt from PRI's The World. For the full text, graphics, and more, visit RationingHealth.org.