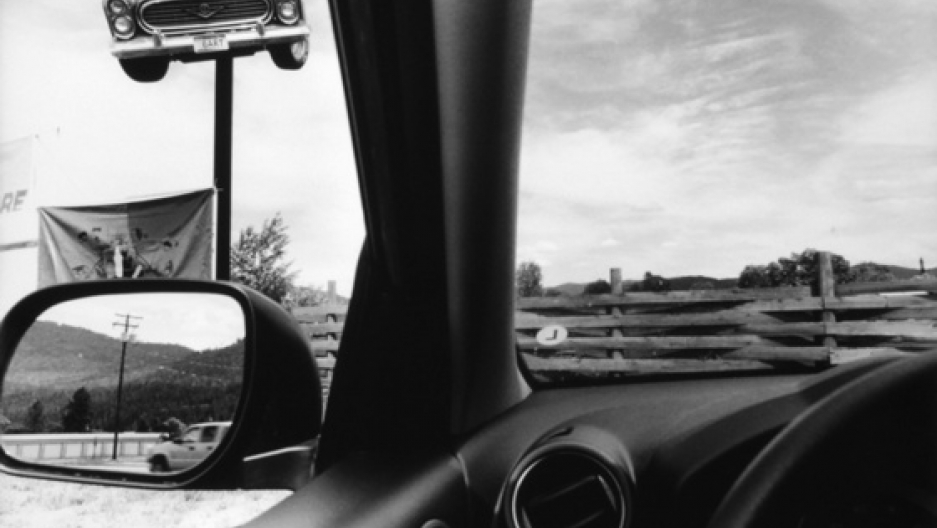 In the 1960s and 70s, the photographer Lee Friedlander took his family on summer road trips. Along the way, he took pictures that established him as one of the most acute, celebrated, modern chroniclers of America. He captured vast swaths of the American landscape, lonely billboards, drive-thru kitch in stark black and white.

Forty+ years later, he's still at it --- and these new images feel just as remote and nostalgic, maybe more so. "Lee Friedlander: America By Car" (featuring work from 1995-2009) is on view at the Whitney Museum of American Art in New York City, through Sunday November 28.

For those initial expeditions, Friedlander's young son Erik was sitting in the back seat. He grew up to be an innovative cellist --- and he made an entire album of music inspired by those trips, all performed on solo cello: Block Ice and Propane. The tracks recall Erik's summers on the road: picking up big blocks of ice to keep the food fresh; sitting above the cab with his sister, watching the stars as his father drove through the night. It's a quiet, varied album ranging from rootsy Americana to tracks that sound dissonant and modern. Much of the music was generated while improvising in the studio.

Back in 2007, Kurt asked him to improvise in our studio. We were working on an episode around the theme of "On the Road" (it was the 50th anniversary of Jack Kerouac's novel). When Erik came by to talk about his album, Kurt asked him to riff on a passage from Kerouac's travelogue. The result was pretty terrific: