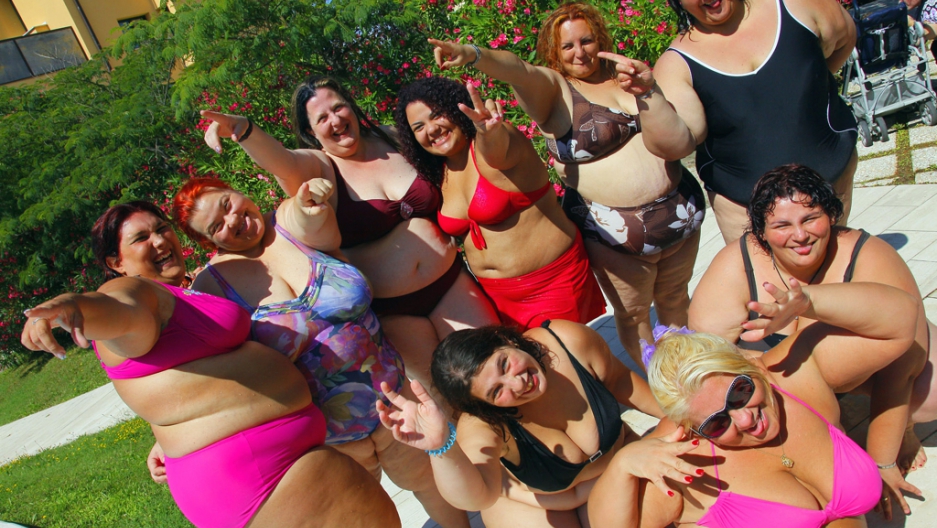 Obesity has spread to every continent in the world, except Antarctica. Here candidates of the 21st Italian national Miss Fat Woman competition pose for a photo, July 31, 2010
Credit: Fabio Muzzi
Share

CHICAGO — Every continent except for Antarctica is represented on GlobalPost's list of the world's top 25 fattest countries, according to 2010 World Health Organization statistics. The causes are simple yet infuriatingly difficult to reverse — humans are eating more and moving less.

Global trends toward urban environments and a reduction in back-breaking, or even simply strenuous, labor mean we aren’t burning as many calories as our svelter ancestors.

And the new global food chain provides an abundance of soda and potato chips, meat and butter compared to traditional diets, which were based on less calorie- and fat-dense foods. To make matters worse, junk food is often cheaper than fruits and vegetables.

“We’re locked in genetically with taste buds that respond to fat, sugar and salt,” said Philip James, chairman of the London-based International Obesity TaskForce. Those were precious commodities to be gobbled up when we were roaming the African savanna. Now we need to stop gobbling.

Obesity is generally measured by a person’s body mass index (BMI), which is a weight-to-height ratio. A BMI of 25 is considered overweight; 30 is obese. The WHO says that once a person’s BMI hits 21, the risk of related health problems like diabetes and cardiovascular disease increases significantly.

The following is a list of the world's top ten fattest countries, as measured by the percentage of the population with a BMI index of more than 25, according to the World Health Organization:

The tiny island of Nauru tops the world's fattest list, and is one of the eight Pacific Island nations in the top 10. Nauruans historically engaged in fattening ceremonies, where well-born young women were kept inside and fed to excess. That legacy, plus the transition for agriculturally poor Nauru from a diet of fruit and fish to Western-style meals, has been devastating.

Dominica sits in the No. 10 spot. Like its Caribbean neighbors, the country has transitioned from an undernourished island fighting infectious diseases to one fighting chronic maladies caused by obesity. In places where the memory of food shortages is fresh, larger bodies are often encouraged.

“Grandmothers are delighted to see children so fat because it means that they’re not on the verge of malnutrition and dying,” James said.

Fat isn't confined to the South Pacific, the U.S. or the Caribbean, of course. Here's a sampling of some of our overweight brethren as measured by the percentage of people in the country with a BMI over 25:

In the 20 years after oil was discovered in Kuwait, the population changed from mostly nomadic Bedouin communities, to wealthy, urban dwellers. Their eating habits changed just as quickly.

That’s not good news given that data show that 16 percent of Argentine children are overweight and 40 percent of them spend more than four hours a day in front of television or computer screens.

Egypt’s women carry the obesity burden, with 76 percent of them overweight compared to 65 percent of men. “They don’t move and they’re around food all day,” Popkin said.

Women are rarely encouraged to play sports, and one study pointed out that something as simple as the country’s preference for multi-story apartment buildings means many Egyptians now take elevators instead of walking up stairs.

“It doesn’t kill you from a heart attack,” James said. “It just blows you up.”

On the whole, Central and Eastern Europeans are fatter than their Western neighbors. This is due in part to the former Soviet bloc’s isolation from Western influence, which came to an abrupt end.

England, whose obesity rate has doubled since 1980, is seeing a bit of hope in its efforts to trim its collective waist. Celebrity chef Jamie Oliver’s 2004 initiative to bring smart eating and cooking instruction to schools has helped improve childhood obesity rates, James said, though adult stats remain stubbornly high.

One example of success: A survey showed that 19 percent of boys and 20 percent of girls ate at least five daily portions of fruit and vegetables in 2008, compared to 10 and 13 percent just four years earlier.