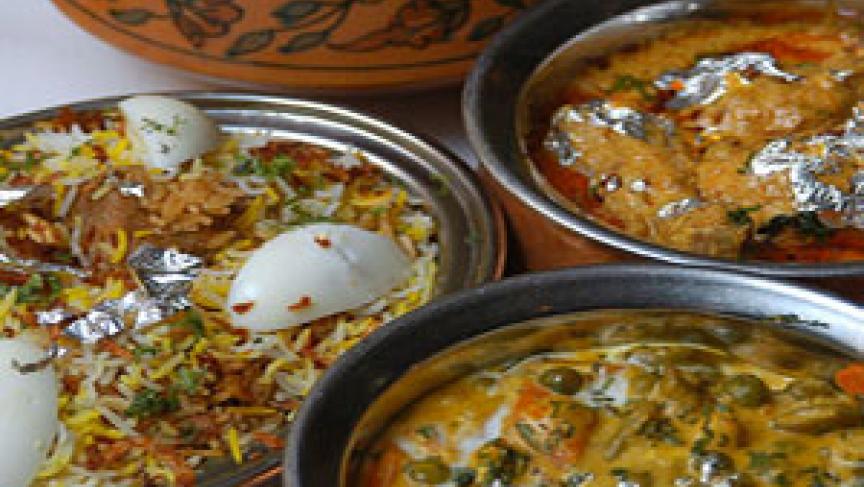 In a busy street market in the Indian city of Ahmedabad, pots of lentils, rice and vegetables simmer on grated burners in front of a row of restaurants. Dozens crouch on the sidewalk out front, waiting to eat. 35-year-old Krishan-sihn Solanki says he comes here often, when he can't find a day's work.

Solanki and the others sitting here pay nothing for a meal. But they do have to wait, anywhere from a few minutes, to a few hours, even though the food has been ready since the morning and is attracting flies.

Food won't be served until someone like Kishor Trivedi arrives. Trivedi, a college professor, hands a restaurant worker a 50 rupee note. That's a little over a dollar. His donation pays to feed five people a vegetarian meal. Trivedi says he often stops by while doing errands.

"Is a God bless," Trivedi says. "Is very nice work. Kindness to other persons."

As soon as his money comes in, a few of the hungry are ushered inside. A restaurant worker spoons rice and lentils onto plates and serves them.

Arif Dalal, one of the owners here, is unapologetic about making people wait for food that's been ready for hours. Dalal says it's more profitable to have a sidewalk full of people in need of a meal. That's just business.

Donors do say that seeing a crowd of hungry people motivates them to give. On busy days, dozens stop by. These charitable restaurants can pull in $200 a day. It may not seem like much, but they turn a profit.

The owners say that by closing time they've served all the food, and no one goes hungry, and those waiting say they always get something to eat. But many have to cycle among the restaurants to get enough.

After finishing one meal, 54-year old Virendra Singh goes back to the end of the line and sits down. He says he's still hungry.

"We have no money and we have to eat," Singh says.

For many of Ahmedabad's poor, the charitable restaurants have become a permanent lifeline. One woman, breastfeeding her child while she waits, says she's been eating in places like this for ten years. She sleeps on a cart across the street. An older man says he needs free food because he doesn't earn enough from his job as a trash picker.

But there's at least one person here who sees these meals as a temporary fix. Seven year old Ashwin Vagri travels from his village to shine shoes here to support his family. He says he doesn't like eating for free but it's helping him save for a future that doesn't include handouts or dirty shoes.

"I want to go to school and have a business when I grow up: a hotel, a tea stall, a toy shop," Vagri says. "Or maybe I'll open a grocery store."

But for now, Vagri says he will be back here for a meal tomorrow.