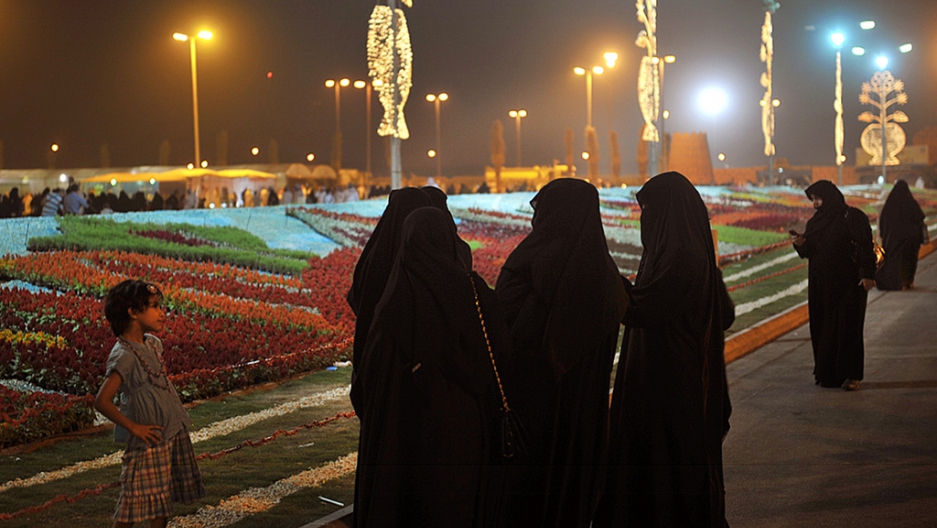 Saudi women gather in front of a carpet made of over 135,000 flowers at the Riyadh Spring Festival in the Saudi capital on April 15, 2011.
Credit: FAYEZ NURELDINE
Share

Top News: In a move likely to raise eyebrows, Saudi Arabia on Nov. 10 won a seat on the 41-member board of a new U.N. panel to promote female empowerment around the world. The kingdom was nominated by a regional group of Asian countries. It is a curious development because of the extraordinary gender discrimination and segregation faced by Saudi women, who live under a system in which male guardians have the final say on many personal decisions of their female relatives. Women are not even allowed to drive in Saudi Arabia. Although the Saudi government under King Abdullah bin Abdul Aziz is seeking to give Saudi women more rights and opportunities, it is constantly stymied by the ultraconservative religious establishment. The latest setback for women came on Nov. 2 with a fatwa, or religious ruling, saying it was against Islam for women to work as supermarket cashiers. Some supermarkets have ignored the fatwa and kept their female employees on the job.

A Saudi appeals court has affirmed the death sentence for a Sri Lankan woman found guilty of murdering a Saudi infant in her care, in a 2005 incident that many see as an unfortunate accident. Rizana Nafeek was only 17 when she was hired as a maid by a Saudi family. Their 4-month-old son died while Nafeek was bottle-feeding him. The Sri Lankan government has asked King Abdullah to pardon Nafeek. It would be easier for him to do this if the Saudi family would forgive her, but so far they have not done so.

Hoping to raise public awareness about the value of early detection of breast cancer, around 4,000 mostly Saudi women created the world’s largest human pink ribbon on Oct. 28 in the port city of Jeddah. The human chain broke the previous Guinness world record of 3,640 participants set in Germany in 2007. The event was organized by the Riyadh-based Zahra Breast Cancer Association. Saudi women suffer from high rates of breast cancer deaths due in part to lack of knowledge on how to do self-exams, as well as widespread reluctance to discuss the disease with medical personnel.

Riyadh won kudos when the White House disclosed that a crucial Saudi intelligence tip led to the discovery of the cargo bombs airfreighted to the United States by an Al Qaeda affiliate in Yemen. President Barack Obama called King Abdullah to thank him for Saudi’s help. The incident may underscore what many in the West tend to forget: That the Saudis also regard Al Qaeda as a terror menace.

U.S.-Saudi ties were further strengthened by the formal U.S. announcement Oct. 20 of its intention to sell a massive arms package — potentially worth up to $60 billion — to the oil-rich kingdom. The sale, which will include 84 new Boeing F-15 fighter jets, is not expected to face significant congressional opposition, and will mean close defense and military ties between Washington and Riyadh for years to come.

Money: Saudi Arabia gave the U.S. job market another fillip a few days later, when it was disclosed Nov. 7 that the national airline had placed a $3.3 billion order for 12 Boeing 777-300 ‘extended range’ planes, with an option to buy 10 more. The purchase is part of Saudi Airlines long-term expansion strategy.

“I’m not for putting that mosque there,” says one of the richest men in the world about the Islamic Center to be constructed a few blocks from the site of the 9/11 terror attacks in New York City. Saudi Prince Waleed bin Talal is the second-largest shareholder in News Corporation, the parent company of Fox News, which has been a vocal opponent of the Center’s planned site.

In an interview with the New York Times, the prince said he prefers a different site out of respect to the families of 9/11 victims, and because the proposed location is near a strip club.

Elsewhere: Americans have beauty queens. Saudis prefer morality queens. Zainab Al Khatam, 24, won this year’s “Miss Beautiful Morals” competition, an annual contest to select a woman who exhibits the inner beauty of “respect for her family, parents and society.” Al Khatam, who is blind, was selected because she remained at home to care for her family after completing her studies. The pageant, which does not have a swimsuit walk, has been organized by a Saudi women’s organization in part to protest the West’s stress on female physical beauty.

It’s a defense that may not do the defendant much good, even if many Saudis do believe in spirits. Charged with financial corruption, a judge on trial in a Saudi court has claimed that a jinn, or genie, made him take the bribes he allegedly pocketed in cases involving illegal land deals. The judge says the genie, who spoke through a real estate broker, put him “under a magic spell.” A lawyer for the broker insisted the genie be ordered to testify in court so the judge’s claims could be verified. That’s one trial I’d like to cover.