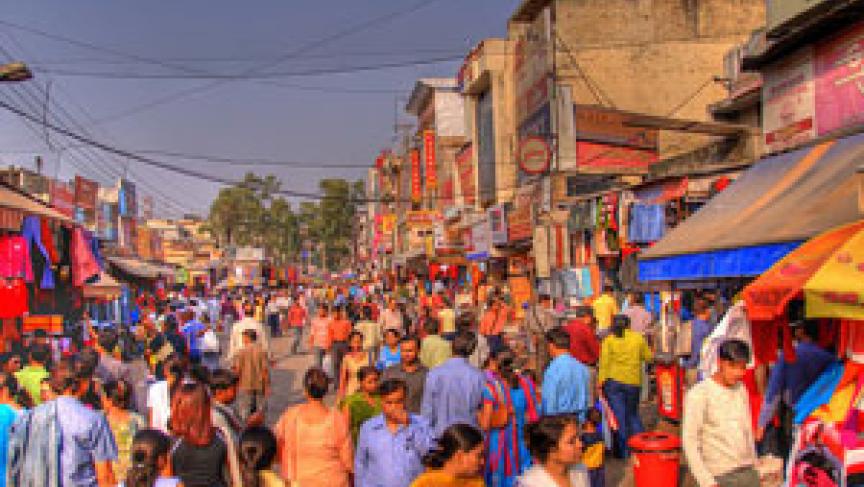 "About almost two years ago now I had gotten a call from a friend who is living over here," Vincent said. "And obviously real estate development in the US had come to a halt. So I was looking for opportunities where I could go and get more experience and work on great developments and he had said how about come check out India. So I packed everyone up and moved over here. It's been a great experience so far."

Vincent is managing a large construction site in the southern city of Bangalore. It's now in the excavation phase. He says it was the chance to work on such big projects -- this one is four hundred thousand square feet -- that attracted him.

"You don't have the funding issues that you did in the US," Vincent said.

"People were able to get loans here even throughout the entire economic crisis. I knew that there would be some challenges adapting to the Indian culture. But I came with a very open mind and said I want to experience the culture as much as I can and try and bring the things that I know from the US.

Most Americans working in India are in the IT field, like the main character in the NBC sitcom Outsourced. But that's starting to change, says Pritam Banerjee, head of the trade policy division of the Confederation of Indian Industries.

"We're also seeing increasing numbers of employment in the medical profession, in the entertainment industry and also in the hospitality industry," Banerjee said.

"These are some of the other big industries that they are coming. The concentration is really in the services sector. I won't be surprised to see when retail industry becomes much bigger in India in the next 10 years, big Indian retail companies going and actually recruiting people from American campuses."

Another example is Solon Stuart Rose, who moved to India, in November 2008, about three months after a stock market crash. Rose works as an energy efficiency engineer for an Indian company now.

"A lot of my friends back in the US that are similar ages, graduated from college," Rose said. "Right after college they moved back in with their parents. They're either looking for a job. They have some mediocre jobs waiting tables.

"The more people see India's growth and the longer the economy in the US is stagnant you're going to see more and more people come across to India or to China or try the expatriate experience," according George Vincent.

Vincent is so please with his life in India that he's thinking of raising kids here after he gets his MBA in the US. Solon Stuart Rose is planning to stay on for the foreseeable future and Pritam Banerjee says India is happy to have the American workers, at least for now.

"The kind of jobs that are being taken up by Americans now and will be in the foreseeable future are not the kind of jobs typically an Indian coming out of college can fulfil that role," Banerjee said. "But if the numbers grow and 10-15 years it's anybody's guess but right now I don't think there's any resentment at all."

At this point, the number of Americans living and working here are still relatively small. But the numbers are likely to rise in the next few years as India continues to grow and develop.