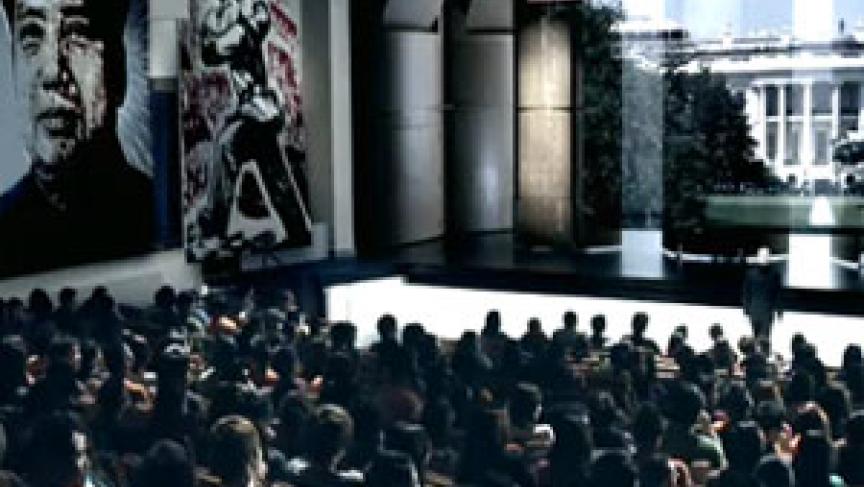 Image of a Chinese class from an advertisement by Citizens Against Government Waste.

This story was originally covered by PRI's The World. For more, listen to the audio.

Recent surveys have shown that New Hampshire has fared the worst in the country, percentage wise, in estimated job losses due to Chinese competition. So it's no surprise that candidates are talking about China this year.

This election is all about "jobs, jobs, jobs. Get them out," Democratic Congressional candidate Ann Kuster, recently told voters in New Hampshire. On her website, Kustler identified "combating outsourcing" as one of her top campaign priorities. To do that, she says she wants to close tax loopholes for companies that hire overseas.

The Republican in the race, Charlie Bass, believes cutting taxes will help stop job loss. He told PRI's The World, "The reason why we're shipping jobs over seas is because we're not competitive." And he thinks that lowering taxes will help businesses compete with China.

Economists aren't sure that either strategy will work. "Is there a way to save the jobs that we're currently losing to China? I don't think so," Ross Gittell an economist at the University of New Hampshire, told The World.

"I tend to think that those jobs are probably gone," according to Dennis DeLay for the New Hampshire center for public policy studies. "The average wage for a New Hampshire worker in manufacturing, without benefits, is about $25 per hour. The average wage for a manufacturing employee in China, including benefits, is about $1.5 - $3 per hour, so that's a pretty compelling argument for expanding your operations in China."

Some have accused China of currency manipulation, saying that's the reason why the United States can't compete, but Gittell doesn't think that's a huge issue either.

If China were to raise wages on par with the United States, Gittell says, "those jobs are not going to go to China, they're going to go to even lower cost countries than China. Indonesia, and lesser developed nations, where lower wages are going to be the source of competitive advantage

That doesn't stop politicians from fear mongering, however. Candidates and independent political groups across the country have been running ads raising fears about outsourcing to China and India. (You can see examples of those below.) That may be because campaign messages tend to focus more on what voters want to hear, rather than what makes economic sense.