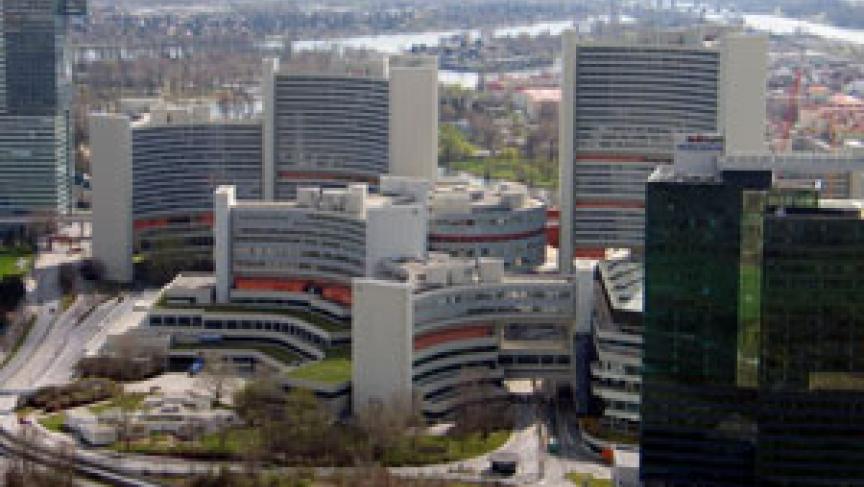 When the subway car doors open at the Vienna International Center, crowds of well-dressed commuters rush onto the platform, all hustling in the same direction and at the same brisk pace. Like a foot race with briefcases. It reminds me of rush hour in my native New York, except that everything here is much cleaner. I follow the human flow out into a cold, drizzly morning. Everyone's wearing I.D. badges on their coats. Because I'm not -- because I'm a guest -- I have to go through a special security search before entering the International Atomic Energy Agency's headquarters. It's like being at the airport: coins, telephone, belt, anything metal into a plastic basket, then a pass through a security scanner. That's followed by the usual questions about my odd gear, my microphones.

Once through security I rejoin the stream of employees and soon find myself before a circular formation of tall towers with a round fountain in front of them. The fountain is ringed by country flags. Nearly every government in the world has a seat here. The place is huge.

I'd been told to head on up to the communications office, where the press folks were awaiting me.

"Excuse me," I ask one of the international policemen on hand, "I'm looking for 'communications.'"
"Which office is it?"
"Exactly."
"There are five thousand offices in this complex," the policeman says, shaking his head. "You, sir, are lacking some information."

I agree and try the middle tower of the seven before me. It's like choosing answer C on a multiple choice test. But my guess is wrong. I manage to get through on the phone to my press contact. She's surprised I've gotten this far without an escort.

"Give me your coordinates," she says. "Sit still, and someone will come fetch you."

Her advice is sound, because you can't even get beyond the elevator lobby on any floor, in any IAEA building, without a special badge that you hold up to a scanner. Security reigns within the IAEA culture. For example, the press people can buzz me in to their offices, but not on to the floor where the Director General works. Or into the area where the inspector training is underway. We have to stand at the glass entry doors and wave someone on the inside over, miming for them to buzz us in. Then we have to identify ourselves. I should have thought to use my head at that point, because once we are inside an instructor informs the class of new inspectors that bathroom breaks will be problematic. Turns out we all lack bathroom clearance.

Even relieving oneself at the IAEA requires an escort.

The need for such control at the IAEA is obvious. These are the folks out to stop nuclear proliferation. As such they're sitting on lots of secrets. I don't learn any, but I know they exist because each time I ask the experts for concrete examples of how rogue states try to cover up their nuclear funny business, I am met with silence. The message is clear. If we share with you the sneaky tricks for concealing weapons programs, then the sneaks will know that we know. And we'd lose our advantage.

That seems fair. And may I use the inspectors' names? No. May I take their pictures? Not if their faces appear. And why not? Because our inspectors need a low profile, I'm told. The work they do isn't under cover, but their snap inspections could, in theory, allow them to catch nuclear facility operators red-handedly mishandling uranium. The lower their profile, the less problems they'll have in the field.

On the first morning of this training course, the 18 new inspectors stand and introduce themselves. They are all highly educated, with graduate degrees in nuclear engineering or chemistry or some related field. But what they most seem to have in common, as this course kicks off, is a sense that they're about to do some good in the world. For that sense of well-being they're sacrificing a lot: much higher salaries in the private sector, a stable home life (inspectors are on the road more than half of their time). But those willing to be interviewed tell me that it's worth it. One inspector says proudly that when his friends ask him about his career change, he tells them, "You know those U.N. weapons inspectors you see on TV? I'm going to be one of them."