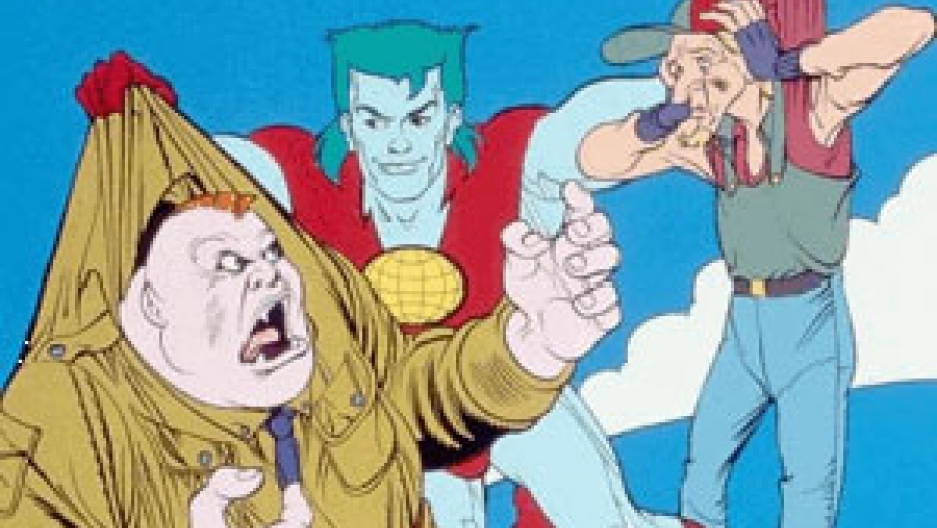 This story was originally covered by PRI's Living on Earth and Planet Harmony. For more, listen to the audio above.

The first introduction to environmentalism for many of today's 20-somethings came in the form of a green-haired, blue-skinned superhero and his five geographically diverse companions. The Saturday-morning cartoon Captain Planet was designed to teach kids about saving the environment.

He wanted me to teach children about the facts of the Global 2000 study! I mean go figure. Ted Turner called me into his office and he said, "Captain Planet" and I said Ted, "what is Captain Planet?" And he said, "that is your problem."

"If you think of Captain Planet as a religion," Pyle said, "then this would be the creation myth -- the creation story." The show started with Gaia, the embodiment of the earth voiced by Whoopi Goldberg, waking up from a nap to discover the earth in serious trouble. She then distributes five magical rings to five children, or Planeteers from different parts of the world. They combine their rings to create the superhero Captain Planet.

"What Captain Planet truly is," Pyle says, "he's a metaphor for teamwork. He doesn't exist without the Planeteers."

About half of the 80 million millenials in the US saw the show, according to Pyle, as well as fans in nearly 100 other countries. Pyle points out "that group of young people is the largest demographic bulge in the history of our species on this planet and they are aging into their power years."

At the time, Whoopi Goldberg said, "We won't know what the outcome of this is until these kids grow up." Now we're finding out.