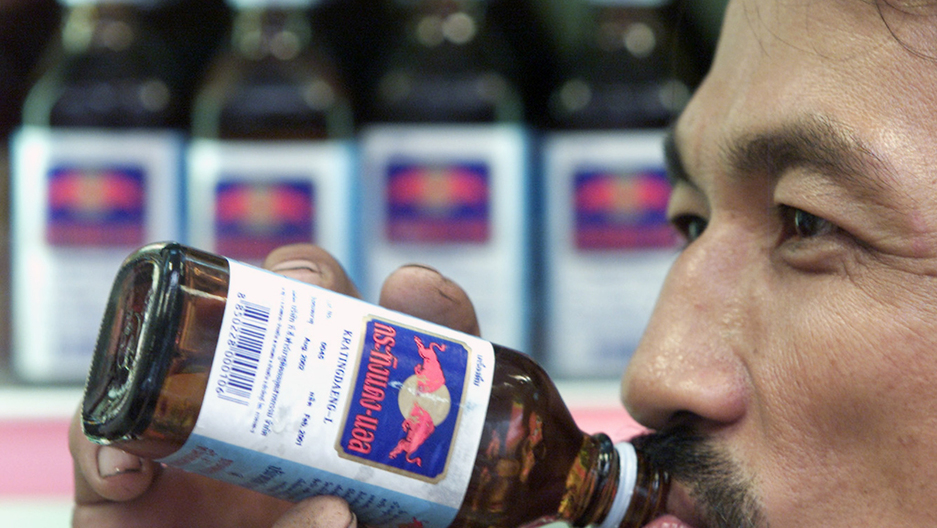 A Thai man drinks a bottle of Krating Daeng, an original Thai version of popular drink Red Bull, in a store in Bangkok on July 24, 2001.
Credit: Sukree Sukplang
Share

BANGKOK, Thailand — Mongkon Kaewgan is exhausted. On a sidewalk near Bangkok’s busiest commercial district, the spindly 22-year-old is slumped over his electric blue motorbike like a rag doll.

Nicknamed “Big,” Mongkon earns loose change zipping passengers through gridlock traffic on his bike. In his shift’s seventh hour, he is lulled halfway to sleep by the drone of idling cars. His cigarettes ran out hours ago.

Each afternoon at about this time, Mongkon slips away to a nearby 7-Eleven and buys a bottle of M-150, a Thai fatigue-fighting tonic. He drains the contents in five hard gulps. Rush hour is nigh and Mongkon fears braving Bangkok’s dodge-and-weave traffic with dulled senses.

“This stuff kills the need to sleep,” he said. “It’s incredible. My whole motorbike taxi crew is hooked.”

No country consumes more energy drinks than Thailand, where the average adult consumer drinks a staggering three gallons per year — four times more than in America, according to Zenith International, a U.K.-based market research firm.

The drinks are cheap (33 cents), spiked with caffeine and sold in five-ounce chug-and-toss glass bottles. Decorated with flying tigers and buffalo skulls, they’re sold under a variety of tough-guy titles: Shark, Magnum .357 and “Raeng,” which is Thai for “power.” Most share the same nearly indistinguishable taste: a non-carbonated, jolt of sweetness reminiscent of liquified gummy bears.

But the current king of energy drink battlefield is M-150, its macho name vaguely suggesting firecrackers or assault rifles. The drink, produced by the Bangkok-based firm Osotspa, controls more than 65 percent of the Thai market, which is estimated at $500 million, according to the Food Industry Thailand consultancy. Osotspa now plans an aggressive expansion in Europe, the Middle East and especially the United States, the world’s largest energy drink market.

M-150’s dominance has required taking on Red Bull, the original iconic energy drink. Only introduced to the United States in 1997, the brand is nearly 50 years old in Thailand.

But M-150 has challenged Red Bull by aggressively courting the male working class (M-150‘s slogan: Devotion! Courage! Sacrifice!). Winning over this key demographic is crucial in a country where laborers rely on energy drinks to push through long shifts.

“The popularity of energy drinks has grown in parallel with the need to work overtime,” concluded a study of Thai energy drink consumers by Bangkok’s Mahidol University. “Although Thailand has high economic growth, the income of laborers, particularly construction workers, does not keep pace with the ever-increasing costs of living.”

“You can work forever and sleepiness never comes,” said Vichit Singsorm, 20, a student who also works for his family business selling milled rice in Saraburi, a province north of Bangkok. Each day, he drinks two bottles of M-150. The drinks bear government warnings against drinking more.

Vichit, who claims to have never tried Red Bull, was introduced to M-150 several years ago by a coworker.

“My friend drinks three per day. This guy practically hugs the bottle as he sleeps,” he said. “I asked, ‘Don’t you feel shaky?’ He warned me not to try it. But I didn’t listen. Now, I’m like him. Totally hooked.”

Introduced mostly to Asian supermarkets for now, M-150 is still struggling for American recognition. Osotspa representatives declined to offer details about their marketing strategy. However, in a 2008 promotional interview with New York public relations firm United World, the company’s president outlined the challenges M-150 faces in the United States.

Like most Thai energy drinks, M-150 is non-carbonated and sold in tiny bottles. Americans, however, are accustomed to fizzy energy drinks sold in cans holding from eight to nearly 20 ounces.

“Americans love big sizes,” said Osotspa President Soonthorn Kengvibul in a pay-for-placement interview distributed in USA Today. “They consume energy drinks the way they would soda. They don’t treat it like the specialty drink that it is.”

Asians also tend to see energy drinks as “functional,” a means of staying awake and working harder, said Soonthorn, who mentioned field workers, truck drivers and manual laborers as typical consumers. In the United States, he said, the drinks are typically packaged as “a fun drink that boosts energy so that young people can party harder.”

Going foreign appears to be the only way up for M-150. Like Red Bull before it, the drink has prevailed in Thailand. But there is only so much room to grow in a country where energy drinks have so thoroughly saturated the market and the people themselves.

“If you have four bottles in one day, you’ll feel awful,” Vichit said. “Your heart goes crazy — Toop! Toop! Toop! — and your hands shake. But just one? It’s great. I couldn’t work without it.”