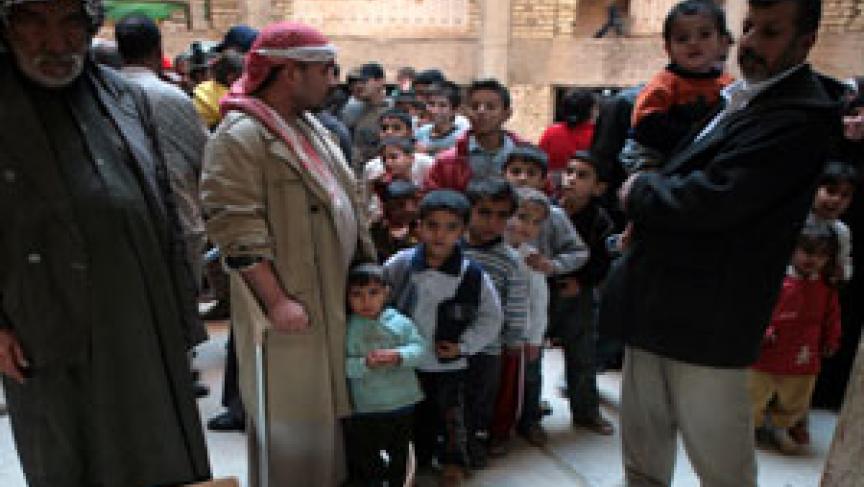 When Iraqi Wisam Mahli qualified for refugee status, the United States wasn't at the top of his list of places he wanted to go. "I tried to change the place because I know the army of the United States," Wisam told PRI's The World. "I hate them. I knew the Bush, I hate them."

Once he, his wife and three children arrived in the United States, their antipathy toward his new home didn't evaporate right away. "In the first day, really, I felt very scared about everything, because I have idea about the Americans -- not a good idea really," he says. "How could I know? They destroyed my house two times. They didn't pay anything."

His resentment has been transformed, though, through contact with the people he's met in the small New Hampshire city where he's lived for eight months. "Because I come from Iraq, you lose everything," he says. "Like you feel you are a baby, you are a newborn. You are searching for anyone to help you."

One of those people who ended up helping him is a Catholic nun, Sister Lorraine Aucoin. "I feel her like the best sister," Wisam explains. "If I need something like TV, like a computer, she give it to me and to all the refugees. And when I see her, I can see the American in another eyes, not the old eyes."

Sister Lorraine's generosity inspired a new trade for Wisam in the United States. In Iraq, Wisam was an electrical engineer. During the 13-year trade embargo on Iraq, he was forced to be resourceful.

Now, in the United States, Wisam has begun bringing dead appliances back to life for the benefit of other refugees. "Irons and computers and televisions and radios and fans and air conditioners, you name it. He was really amazing at," Sister Lorraine told The World, "and the people were so grateful."

Wisam is humble about his skills. He says, "The American people I don't know why they don't fix anything. It's very easy to fix it."

Drawing inspiration from Sister Lorraine, Wisam is now determined to help other refugees. He told The World:

I see now in the street anything, television, or fan, or air conditioner. Any electrical. I take it and fix it and give it to Sister Lorraine or give it myself to new refugees. Because I want to do like Sister Lorraine. I want to help everyone and a new refugees when he come to United States, he will find another one to help him.