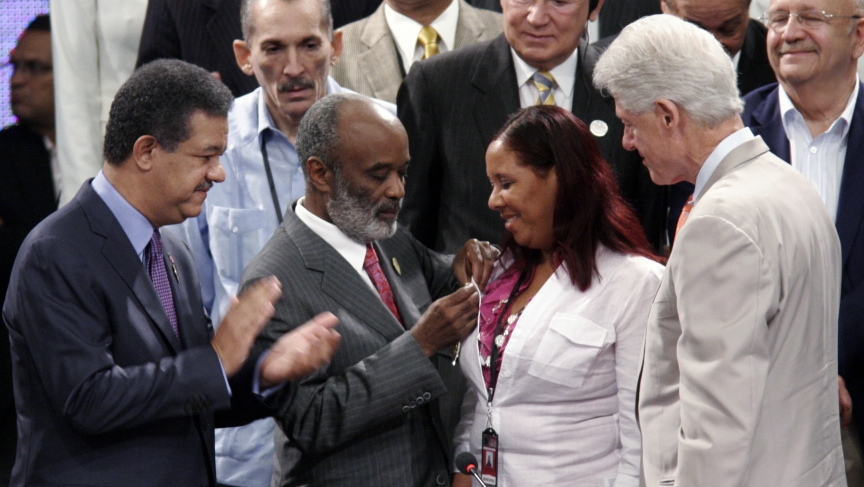 Haiti's President Rene Preval, second from left, awards a decoration to Dominican Republic resident Sonia Marmolejos, center, for her solidarity breastmilk drive for children who were victims in the Haitian earthquake during a summit on Haiti in Punta Cana June 2, 2010.

Haiti and the Dominican Republic share the island of Hispaniola, but the two Caribbean nations have not exactly been good neighbors over the years. Haitians and Dominicans each have a litany of bad memories.

Haitian elders can’t forget 1937 when Dominican dictator Rafael Trujillo ordered the massacre of thousands of Haitians living in his country. Younger Haitians talk about the ill treatment of Haitian migrant workers across the border.

Dominicans, for their part, point to Haiti’s 22-year occupation of their country in the 19th century and they complain about Haitian street children in their capital. All that may explain why it’s been rare to see Dominicans in Haiti in recent years. But that changed after January 12th.

Thousands of Dominicans poured over the border to give food, water, shelter and medical help. Many have gone home since then, but not all.

In a mountain community two hours west of Port-au-Prince, about 70 volunteers have set up camp to help locals rebuild their homes. The volunteers are working with Un Techo para mi Pais, a Chilean organization. But most of them aren’t Chilean. They’re Haitian and Dominican.

For many, it’s their first time working and playing with their cross-border counterparts. Nathanial Rodriguez, a 29-year-old graduate of Santo Domingo’s Institute of Technology has come to Haiti several times since the earthquake hit. But before that, he never crossed the border. It wasn’t exactly his choice to come here. 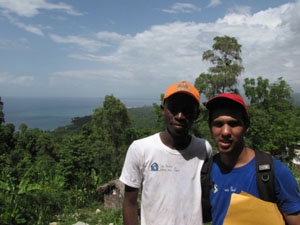 He signed up to volunteer with Un Techo and this is where they sent him. And he wasn’t exactly at ease here at first. "I was walking alone and I came across three Haitians who stopped me. It scared me a bit and they asked me in Creole if I was Dominican. I didn’t know what they were asking. I didn’t understand. I started to feel a little frightened," Rodriguez said.

"They asked three times and finally I got it and I said, 'Yes, I am Dominican.' And they said, 'Thank you.' All three said thank you for your help in the little Spanish they spoke and that calmed me down to the point of crying because it showed that sometimes tragedies, crises, create opportunities."

Another volunteer, Cecia Voci, is a Haitian communications consultant. She says for the first time, she has Dominican friends. "For a long time everyone said Dominicans are mean, that they would cut Haitians in pieces. We used to be afraid, but now we see it’s not true," Voci said.

The Dominican response has astonished even Haitians with a deep knowledge of their neighbor. Guy Alexandre, who has served twice as Haiti’s ambassador to the DR says he wasn’t surprised by the fact of the solidarity after the earthquake. What he didn’t expect was the enormity of that solidarity.

Dominican president Leonel Fernandez was the first foreign head of state to visit Haiti after the tragedy. His government facilitated access to Haiti for hundreds of international relief organizations unable to fly in to the devastated country.

Alexandre experienced the Dominican response firsthand when his wife was pulled from the rubble of her office building. She was medivac-ed to the DR, where she stayed for months getting surgery and physical therapy. Alexandre accompanied her across the border.

"It was clear in the streets of the Dominican Republic that pretty much everyone of all walks of life was feeling compassion for Haitians," Alexandre says. "Of course, compassion can dissipate.

After a hurricane wiped out much of Santo Domingo in 1930, Haitians rushed in to help. And that piece of island history is widely forgotten. But he thinks that this time the mutual goodwill might endure.

He says he hopes the two countries will continue to wash away the historical negative impressions they have of each other and to construct good relations. And he’s confident that important steps are being taken in the post-quake period.

"President Fernandez said something very important to me. He said, 'Ambassador, since the earthquake, we’re going to have an earthquake in the relations between Haiti and the Dominican Republic. Everything will change.' And I think everything has changed," said Ruben Silie Valdez, the Dominican ambassador to Haiti.

Still, Haitian historian George Michel thinks it’s going to take some time and some education. "We don’t know each other. That should be the official policy of both governments, the Haitian government and the Dominican government, to make the other nation know more about the other one," Michel says.

For now, that is happening on a small scale with student exchanges, joint medical teams, human rights workers collaborating along the border and volunteers building homes together in rural Haiti.