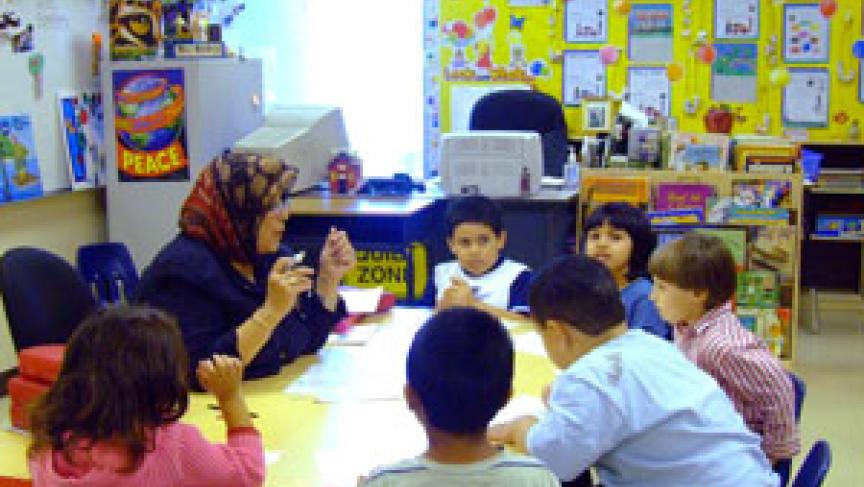 Pundits and politicians are crowing about the proposed Mosque in lower Manhattan, while advocates are fighting another battle over Islam in New York City. Last year, New York's City Council passed a resolution in support of giving all children, not just Muslims, the day off from school during two major Muslim holidays.

Muslim children, who represent an estimated 10 to 12 percent of the city's student body, can already take off the holidays without repercussions. But many don't want to be forced to make a choice between practicing their religion and going to school. They think that the school should be closed two holidays -- Eid al-Fitr, a celebration at the end of Ramadan, and Eid al-Adha, marking the end of the annual pilgrimage -- for everyone, regardless of religion. Huyam Belguet, an 8-year-old student, told PRI's The World:

It's not fair because the other religious holidays are in the calendar and they get their school off. But us, we don't get it. The school's still on. And we have to choose between school or practice our religion and do our holiday. I always have to pick.

Her mother, Isabel Bucaram, was more blunt. She told supporters, "I say no to your selective consideration. I say no to your fake excuses of incorporating holidays into the calendar."

Standing in the way of advocates is New York City Mayor Michael Bloomberg, whose administration oversees the schools. He has so far refused to approve the holidays, saying: "Everybody would like to be recognized but the truth of the matter is we need more school days not less.... Our kids need more education not less."

Schools are closed on both Christian and Jewish holidays in New York City, and advocates argue that not recognizing Muslim holidays would be tantamount to favoring certain religions over others. That's the wrong argument to make, Asma T. Uddin writes for the Washington Post, because it would likely lead to a fully secularized calendar, with no religious holidays off. "In other words," she writes, "the endorsement argument ultimately hurts the cause of protecting a space for vibrant religious expression in the public sphere."

Instead, people should argue that normal school is impossible with 12 percent of the student body absent. Schools in Dearborn, Michigan, close during Muslim holidays because nearly half the students are Muslim. New York City, according to Uddin, should take a similar tack.

Fighting for recognition of Muslim holidays is an extremely American pursuit, Louis Cristillo, a researcher at Columbia University, told The World. The protests, according to Cristo, are the product of "a new generation of American Muslims who are familiar with and know the power of engagement." As Isabel Bucaram put it: