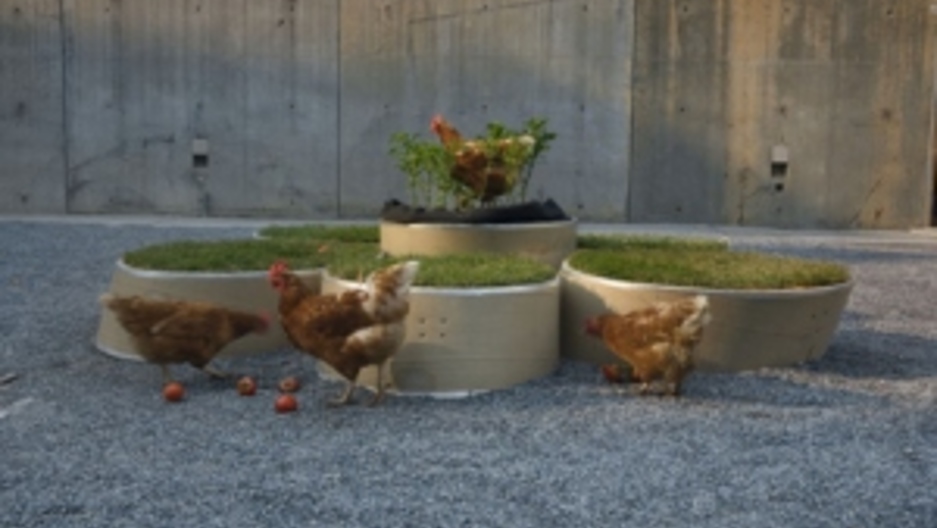 Be careful what you wish for. New York's MoMA thought it had commissioned a group of artists and architects to create a farm in the courtyard of it's Queens outpost,P.S.1. And on opening day they didn't disappoint.

Surprise! Unbeknownst to MoMA, a "tool shed" the architects were building was actually a chicken coop. On the day of the opening they smuggled in six chickens and a dozen chirping chicks.

But all chickens aside, P.F.1 (Public Farm 1) was a very impressive achievement. This urban farm supported more than 30 varieties of vegetables, herbs, and flowers -- it also included a solar-powered phone-charging station and even a juicer for fresh veggie cocktails. A project this ambitious took a team of architects, farmers, politicians, artists, and scientists several months to put together. The video below (by architecture partners WORK) gives you a sense of the logistics required for a project of this scale.

The team's efforts are chronicled in Above the Pavement - The Farm!

P.F.1 reminded me of another outrageously ambitious urban farm project: 'Wheatfield - a Confrontation'. In the summer of 1982, a flourishing field of wheat sprung up in a vacant lot near the World Trade Center. It was the work of ecological artist Agnes Denes. 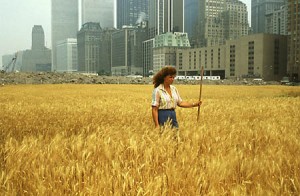 It took two assistants and a bunch of volunteers to help her remove trash from the land, spread truckloads of topsoil, and plant nearly two acres of wheat. The result: a beautiful field of golden wheat planted among the sleek steel skyscrapers of downtown Manhattan. After harvesting, the hay was fed to the horses stabled by the New York City Police department and the grain traveled around the world as part of an art exhibition organized by the Minnesota Museum of Art.

Dene's art and efforts like the P.F.1 project prove that we can use our cities as laboratories for experimentation, and that even the most impossibly utopian visions of green city living may be within our reach.