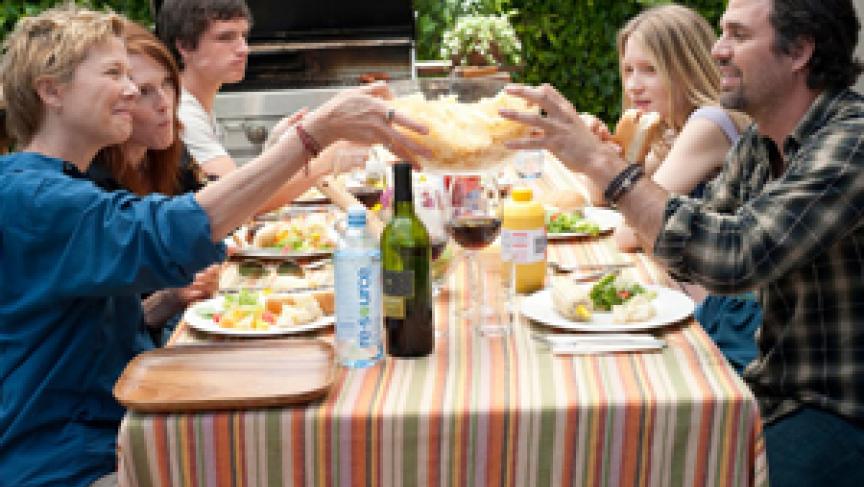 A Scene From 'The Kids Are All Right' (Image: Suzanne Tenner, Focus Features)

This story originally aired on PRI's Studio 360. For more of the interview, listen to the audio.

Hollywood has never produced a realistic movie about lesbian parents, until now. In her new film "The Kids Are All Right," writer and director Lisa Cholodenko tells the story of two moms, played by Julianne Moore and Annette Bening, and their sperm donor, played by Mark Ruffalo.

Nic and Jules make up the lesbian couple whose teenage children, conceived by artificial insemination, decide to track down their biological father, Paul. The story revolves around the disruption Paul causes when he comes into the family. Nic and Jules' relationship with their children, as well as their own relationship, are thrown off balance as the kids bond with Paul and Jules finds herself in a dalliance with him.

On Studio 360, Cholodenko told Kurt Andersen she wanted to make an accessible, touching film out of what could have been an outsider art-house flick.

"Part of what the calculation was ... let's take this theme that could really be like a marginal theme ... and open it up to be as universal and as accessible as we can, and take all of the things that are potentially rarefied and super subversive, and let's make a mainstream film out of it."

She also wasn't interested in including a lot of politicized conversations in the film around Nic and Jule's relationship, Cholodenko added. "That was like the last thing we wanted to do ... that by and large isn't where the culture is anymore."

The idea for the film came out of the director's own real-life dilemma. When Cholodenko and her girlfriend decided to start a family, they choose to do so through an anonymous sperm donor.

"The Kids Are All Right," now playing in theaters, is Cholodenko's fourth feature film. Her past films include "Laurel Canyon" and "High Art."

View trailer video for "The Kids Are All Right":