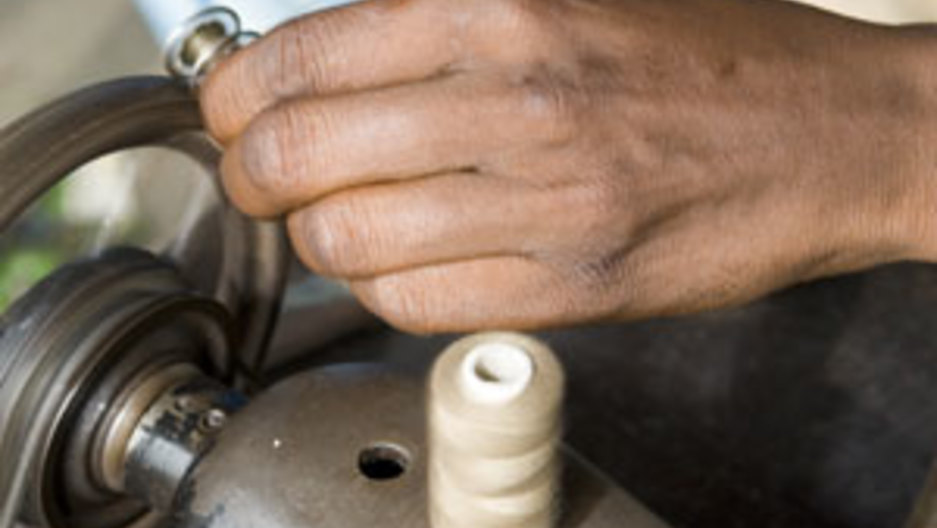 After a military coup overtook Liberia in 1980, Chid Liberty and his family fled the country for the United States. Liberty studied abroad, but knew he wanted to return to Liberia and help the country rebuild. He told PRI's The World:

Unfortunately there wasn’t really the political or economic climate here that would allow me to come and do something. I’ve always been an entrepreneur since I was a little kid. So I knew I wanted to do something in economic development, and specifically in small business development.

Today, Liberty owns a factory in the capital Monrovia that employs 32 women at reasonable wages, with health care and a monthly bag of rice as perks. The factory also has air conditioning, which can be a rare treat in West Africa.

The California-based organization Transfair USA has certified the factory as fair-trade, meaning it complies with 90 regulations, including child labor, forced labor, health and safety, working hours, wages. Every aspect of the clothing's production is scrutinized by Transfair USA. According to the organization's textiles manager Heather Franzese:

In this case, it’s a full West African supply chain. So the cotton is grown in Mali and Burkina Faso, it’s shipped to Morocco where it’s spun into yarn and fabric, and then sewn here in Liberia.

Liberty is also taking no profit from the sewing operation. He earns his living through a trading business back in the States. Liberty says all future earnings in Monrovia will be put into a fund. He told The World, "these women actually decide where that money goes in terms of building schools, roads, health clinics in their communities."

Not everyone is convinced that the Fair Trade label is economically sustainable. Economic historian James McWillians at Texas State University points out that Fair Trade operations are essentially asking people to pay more for the same product -- a hard sell, especially during the recession. He told The World, "It's a very difficult thing to do, and at some point the laws of economics are going to catch up with you."

For now, the factory seems to be working well. And Liberty believes that the ethics are actually what makes the factory stand out. He says, "That’s actually our competitive advantage over a factory in China or a factory specifically that uses sweatshop labor, is that we say, listen, we have a supply chain you can actually boast about."

The question that remains is whether enough people will buy it.