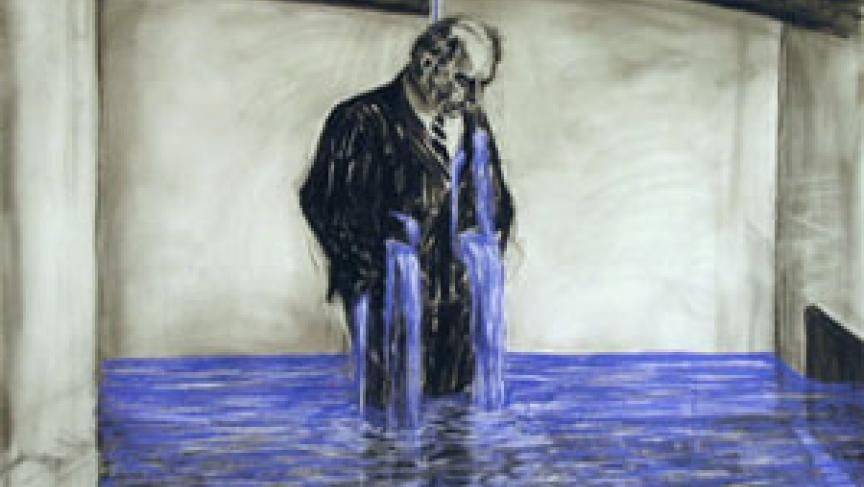 (Image from MoMa (see below))

This story was originally reported by PRI's Studio 360.

Standing in stark contrast to the pomp surrounding the World Cup, William Kentridge's films are a stark reminder of South Africa's violent and not so distant past. He is able to represent the violence and bloodshed of South Africa's apartheid in touching and sometimes absurdist art.

"There's always a question, what is the best way of representing social calamities," Kentridge told PRI's Studio 360. Films like "Ubu Tells the Truth," for example, depict the horrible violence caused by South Africa's security police. At the same time, the characters Kentridge creates have dream lives, and are sometimes funny. At one point, he depicts a duet between a cat and a radio. "Tragedy, it seems to me, is always inadequate."

Kentridge draws his films in charcoal on paper—photographing, erasing and redrawing lines—leaving eerie remnants of the drawings that were once there. In some sense, the films are an attempt to come to terms with having both lived and survived apartheid. He said:

To be human at all is to say, 'we need to forget a huge amount, but hold on to a tiny amount.' Or there's some band between remembering and forgetting in which we can survive and exist.

While intensely political, Kentridge resists labeling his films with an ideology. He told Studio 360:

In so far as there's a polemic, it's a polemic about uncertainty and not having an answer, and not having a manifesto. I mean, behind every manifesto stands a policeman with a big stick to beat anyone who doesn't absorb the words. It's a politics interested in the absence of that.

Instead, the films are more of a struggle to understand apartheid. He said, "When you can't get any distance from the event you've gone through, it becomes an unviable way of living in the world."

You can watch a video from the Museum of Modern Art with William Kentridge below: