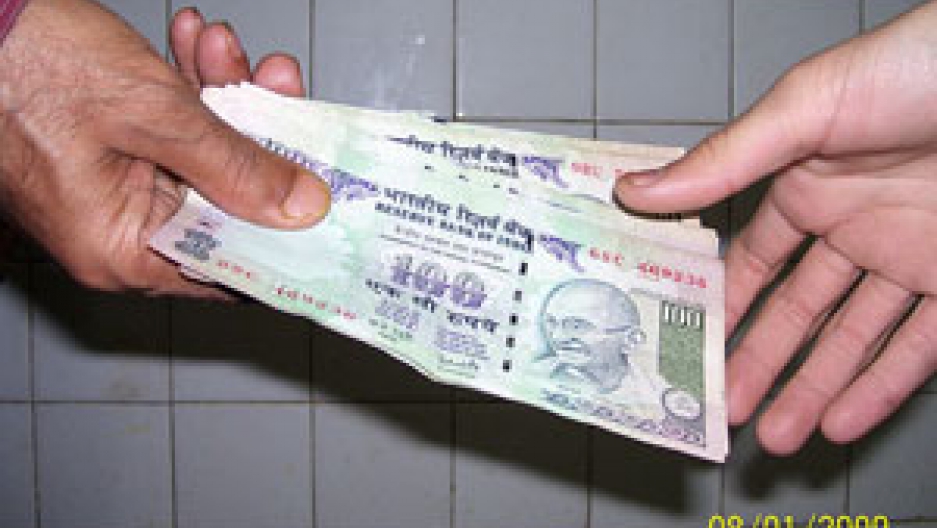 "Corruption starts right before birth until death for an Indian citizen," Vijay Anand, the President anti-corruption organization of Fifth Pillar told PRI's "Here and Now." Parents have to pay bribes to learn the sex of their children. People have to pay bribes to go to school, to start a business and to pay taxes. Once a person dies, the family has to pay a bribe to get the death certificate. "So for a single Indian citizen," Anand said, "it does not stop even after death."

To end this vicious cycle, the Fifth Pillar is distributing an innovative zero rupee note—a piece of paper resembling currency, with no cash value, proclaiming that the bearer of the note "promises to neither accept nor give a bribe." The notes help people say no to bribery, and they're designed to strike either fear or shame into the hearts of corrupt officials.

The zero rupee note reminds people that bribes are illegal, and can be punished by fines or jail time. It also sends a message that people who reject corruption are not alone, because it clearly has the name and contact information of the Fifth Pillar printed on the note.

The effort, started in 2007, is being lauded as an success, and its grassroots strategy has many rethinking how to fight corruption worldwide. The World Bank blog related two poignant anecdotes:

Fed up with requests for bribes and equipped with a zero rupee note, [an] old lady handed the note to [an] official. He was stunned. Remarkably, the official stood up from his seat, offered her a chair, offered her tea and gave her the title she had been seeking for the last year and a half to obtain without success.... In another experience, a corrupt official in a district in Tamil Nadu was so frightened on seeing the zero rupee note that he returned all the bribe money he had collected for establishing a new electricity connection back to the no longer compliant citizen.

So far, there has not been one reported case of retribution or one case where the zero rupee note has complicated a situation, according to Anand. He also told the Boston Globe that the idea has been gaining interest from countries around the world including Argentina, Mexico and Nepal.

The note's success suggests that fighting corruption need not come from large, expensive, top-down strategies. In fact, small efforts by lots of people can make a big difference.