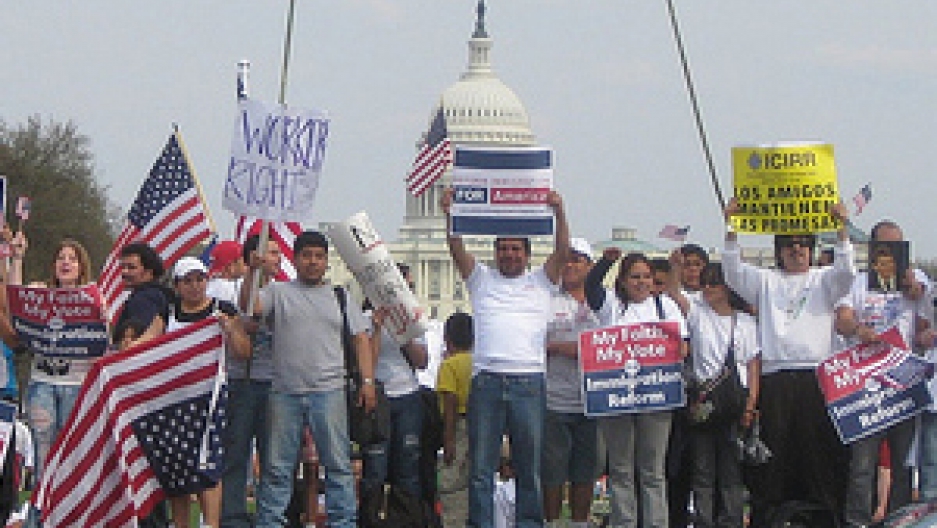 Audio not available for this story.

As the attention of Congress appears to be drifting away from immigration reform, a group of Senate Democrats continues to push for action. The issue has been on the back burner for months and it's now unclear whether the recent talk of action will lead to significant debate this year.

In a packed press conference last week, Majority Leader Sen. Harry Reid (D-NV), joined other top Democrats in releasing a framework for moving forward. They say the framework is based on bipartisan conversations between Sen. Chuck Schumer (D-NY), and Sen. Lindsey Graham, (R-SC).

"We are offering this framework as an invitation to Republican colleagues to work with us to solve this problem that has plagued our country for too long," Reid said.

Many Republicans, and even some Democrats, doubt the possibility of action on comprehensive immigration reform in advance of the midterm elections. Graham was negotiating with Schumer on the issue but says Congress needs to move on climate change legislation first.

Graham released a joint statement with Sen. Jon Kyl (R-AZ), saying that new framework by the Democrats is, "nothing more than an attempt to score political points. It poisons the well for those of us who are working toward a more secure border and responsible, bipartisan reform of our immigration laws."

The Democratic framework calls for increased border security, a path to legalization for certain illegal immigrants already in the U.S., reform of the guest worker system and biometric social security cards to verify employment eligibility.

"What we have in mind is not amnesty. It's a tough and fair path forward for those who have contributed to American society," said Sen. Diane Feinstein (D-CA), who has been pushing for the AgJobs legislation to make sure the agricultural industry has legal access to the immigrant workers that farmers say they need to make ends meet.

"Take a look at this proposal, which is a good faith effort to move forward," Reid said to Republicans.

But GOP leaders wonder whether the proposal is really a good faith effort. President Obama and Reid himself have signaled their desire to act on climate change. That leaves Congress with little time to take on such a controversial matter like immigration. Plus, Reid is in a tough re-election battle and Latino voters, many of whom are eager for immigration reform, will come in handy.

"What is being billed as a comprehensive immigration and enforcement package is actually far more permissive than the 2007 bill. It doesn't provide the funding to ensure that the border is actually secured, it doesn't end chain migration, and there is no real temporary worker program," Graham and Kyl said.

Schumer acknowledged the journalists, pundits and politicians who have been skeptical of the possibility of significant action on immigration reform.

"I completely disagree. If I did not believe we could accomplish immigration reform, I never would have chosen to accept the immigration subcommittee chairmanship," he said.

Schumer described the Republican talk of border security as political talking points. Feinstein stressed the recent efforts to boost border security. The Obama administration has come under fire from immigrant advocates and business leaders for its enforcement policies and workplace audits.

"The system is still broken because there are many parts of the system. Substantial progress has been made," Feinstein said in support of broad, comprehensive action.

Rep. Luis Gutierrez (D-IL), said that, "if no Republicans come forward, we will know whether they are serious about solving problems, standing up for what they believe in, or caving in to the lowest common denominator anti-immigration politics of some in their base."

Gutierrez has been the loudest House proponent of immediate action on immigration reform. He says inaction may cost Democrats dearly at the polls with Hispanic voters.

Democratic leaders say the Senate needs to act first on the issue. Several major bills have passed the House only to stall in the Senate. That's why the talk of moving forward there on the matter is so significant. It's also a response to the new controversial immigration law in Arizona, which comes in the wake of Federal inaction.

“We owe it to the people of Arizona and Illinois. We owe it to all Americans to pass comprehensive immigration reform legislation,” said Sen. Dick Durbin, (D-IL).