Post-its - those handy little sticky notes - turn 30 this year. To celebrate the milestone, 3M is inviting young people aged 11 - 18 to create Post-it art. The winner will work with an artist to create the world's largest billboard made entirely of Post-it notes. It will be displayed in Vanderbilt Hall at New York's Grand Central Station in August 2010.

Both contest and prize seem appropriate; Post-its have often been used as a medium to channel artistic expression...

This mural is actually a mosaic of individual, community-generated to-do notes. 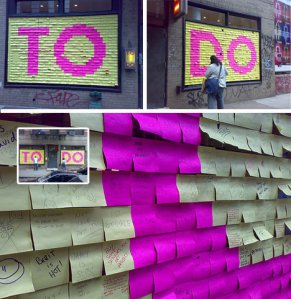 In a pinch, you can also use them to redecorate your home. 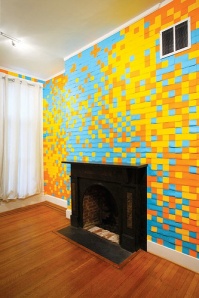 And if you feel like you might need some background for your Post-It art, check out Studio 360's post-it sized profile of the Post-It, provided by Paola Antonelli, design curator at the Museum of Modern Art.