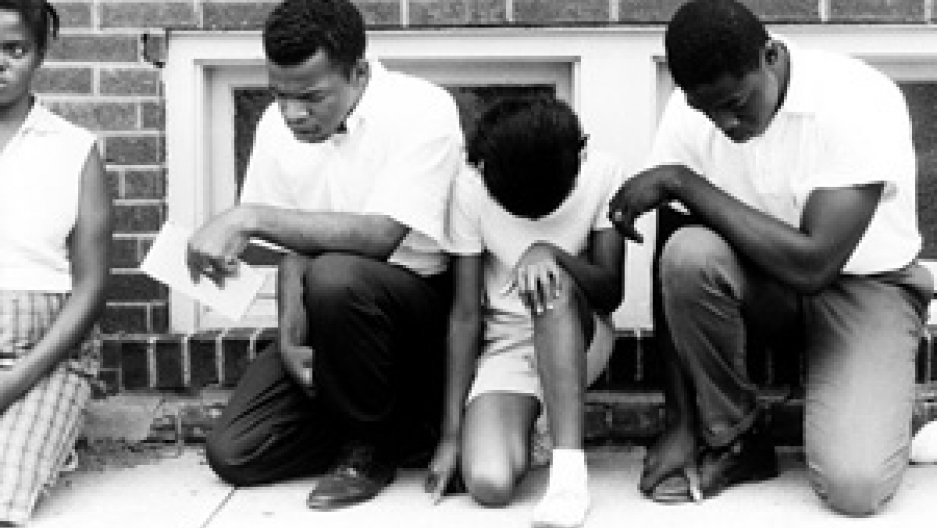 John Lewis (second from left), and other SNCC members pray during a demonstration in Illinois, 1962. (Image: Library of Congress)

This story is adapted from a broadcast audio segment; use audio player to listen to story in its entirety

Congressman John Lewis (D-GA) has had a front row seat to history, having actively participated in the evolution of America on the civil rights front -- from being the youngest to speak throughout the March on Washington, to now one of the senior members of the Congressional Black Caucus.

Lewis has always taken an active part in the fight for social justice. He was a founding member of the Student Non-Violent Coordinating Committee (SNCC), formed 50 years ago, which mobilized students across the country in an effort to end racial segregation.

In 1960, to protest Jim Crow laws which mandated racial segregation in all public facilities, Lewis and a group of black students  began sit-ins at segregated lunch counters in Tennessee.

"All over the South, black people and white people could not be seated together in a restaurant, at a lunch counter. Young people, college students, high school students, black and white, went out -- understanding the philosophy and the discipline of non-violence -- started sitting in."

According to Lewis, the students experienced humiliation and violence at the sit-ins, which usually ened in the students being arrested.

"We'd be sitting there in an ordinary, peaceful, non-violent fashion, waiting to be served, and someone would come up and spit on us, or put a lighted cigarette in our hair, or down our backs. And then people would come up and pull us from the lunch counter stool, beat us, and we would be arrested and charged with disorderly conduct, or disturbing the peace, or trespassing."

Martin Luther King, Jr. was so impressed by the actions of the students, says Lewis, that he asked a young woman by the name of Ella Baker to organize a conference, inviting students from 58 colleges and universities.

"More than 300 people showed up at Shaw University in Raleigh, North Carolina, where SNCC was born," said Lewis. "It was Easter weekend, 1960."

Baker, considered by many as an unsung hero of the civil rights movement, was a "brilliant" radical who spurred on the creation of SNCC as an independent organization, says Lewis.

"She was a fiery speaker, and she would tell us to 'organize, organize; agitate, agitate! Do what you think is right. Go for it!' Dr. King wanted her to make SNCC the youth arm of his organization. But Ella Baker said we should be independent ... and have our own organization."

While the SNCC was deeply inspired by Dr. King and the SCLC, or the Southern Christian Leadership Conference, the students in the organization didn't always see eye-to-eye with SCLC leadership.

"We had a lot of young women, and SNCC didn't like the idea of the male chauvinism that existed in the SCLC," says Lewis. "The SCLC was dominated by primarily black Baptist Ministers. And these young women did all the work and they had been the head of their local organizations."

In October of 1960, at Morehouse College, SNCC became a permanent organization with Marion Barry as its Chairman. Lewis became Chair of SNCC in 1963.

"We called ourselves a band of brothers and sisters, a circle of trust," Lewis says. "We had been told over and over again, 'don't get into trouble, don't get in the way.' But we had been inspired to get in the way. We had been inspired by Dr. King, the teachings of Ghandi ... and we weren't able to get a hamburger and a soda. We were determined to change that. And we became warriors, we became soldiers in a non-violent campaign."