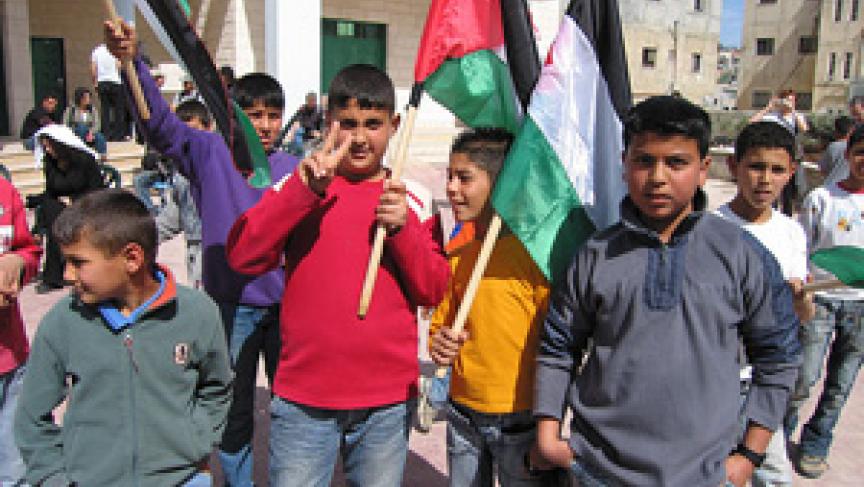 At the opening of the non-violence conference in Ramallah, Palestinian government advisor Jamal Zakout gave an impassioned speech about something called the white intifada. Palestinians in the West Bank have waged two intifadas, or popular uprisings, before. The first, which began in the late 1980s, was marked by civil disobedience and stone throwing. The second brought with it a wave of suicide bombings. The new white intifada is not yet clearly defined, but Zakout says it’s peaceful.

Not too long ago, Palestinian leaders speaking about peaceful opposition to Israeli occupation wouldn’t have gotten very far.  When Martin Luther King, Jr.’s son spoke in Ramallah, he acknowledged that non-violence is a work in progress here.

"My father’s dream of peace and non-violence certainly, I believe, is alive and well even here in Ramallah," said King. "And as I’ve been listening to the initial discussions today, I am very optimistic. But I also know that we still have a long way to go."

Palestinian leaders in the West Bank don’t think they’re too far off the mark. Many are now publicly endorsing non-violent ways to oppose settlements and Israel’s military presence in the West Bank. For example, Prime Minister Salaam Fayyad recently visited a small Palestinian farming village and tilled the soil. He’s been appearing in other West Bank villages under Israeli military control, meaning not under his authority, and he’s been planting trees.

Fayyad sees these activities as putting facts in the ground, so to speak. "As we endeavor to safeguard and protect our right to life on our land, I thought this would be an important location to be in, given that it is remote. It is as you can see, targeted by settlers who live nearby, who started to frequent the place."

And Palestinian national economy minister Hasan Abu-Libdeh says the government will enforce a boycott of products made in Israeli West Bank settlements. He says about 200 million dollars worth of these goods are sold in the Palestinian market.

"Settlers, if they are sitting on our soil, consuming our land, our air, our everything, why should I consume their products? As simple as that."

Shopkeeper Hanna Yanni says officials confiscated 42 bottles of liquor which were bottled in an Israeli settlement. "I have two children and I have my shop. I have two workers and I have to pay electricity, and they came to take stuff from me like this. It’s not fair."

His customer, Maysa Khatib, didn’t see the point. "If I don’t buy Israeli products, I will gain independence? That’s nonsense."

Then there’s the growing number of weekly demonstrations taking place at the Israeli separation barrier. They’re intended as non-violent marches, but often end in Palestinian youths tearing down parts of the barrier and lobbing rocks at Israeli soldiers. While most Palestinians these days don’t condone armed resistance to Israel, many are still skeptical of the while intifadah.

"It’s very hard to see that you are being violated -- your human rights, your dignity, everything -- and you just speak about non-violence," said one woman.

The Israeli government is also dubious.

" We think boycotting produce is not a serious political strategy," said Israeli spokesman Mark Regev. "On the contrary, it’s in many way, it’s political theater."

But what Israel sees as theater, and Palestinian shopkeepers like Yanni see as inconvenience, Palestinian leaders in the West Bank consider practicality. They’re on a deadline. They pledged to create an independent Palestinian state by August 2011, and the way they see it, ridding their shelves of settlement products is a step towards building up their own industry.