Dean's trip was equal parts performance art and sculpture. He bought a used Hummer, sliced off most of the front end, and turned it into a modern version of the Hoover Cart - a modified horse-drawn car that Depression-era drivers resorted to when they could no longer afford gasoline. Titled 'Back to the Futurama,' the project is at once a reminder of our recent economic history and a cautionary tale of what may come.

Dean explains, 'I began to wonder what we would do with all this stuff if it became, through crisis, impossible to use as originally intended. I had grand images of Hoovervilles made out of plasma TV's...destitute people being surrounded by marketing images of things never to be afforded.' 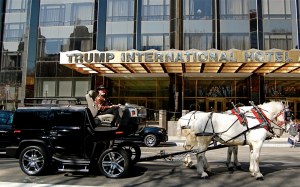 The work may be more prescient - and practical - than Dean intended. On April 7, GM announced it would discontinue the Hummer; it seems not enough people could afford nine miles per gallon. Then again, Dean's model requires ample stores of hay and oats, and an occasional reshoeing.